Thrifting with The Mutes

The Breadman is off on Wednesdays so we always go somewhere and do something.  Some days are planned out - a museum, the walking trail, a picnic.  Other days are for errands - groceries, Sam's, gas up the car, etc.  Other days are like today - nothing planned and we didn't need anything, so we were free and clear.  We decided that we would go eat Chinese food later in the day, but until then, who knew?

Have I ever mentioned the fact that The Breadman doesn't talk much?  He just sits there.  We could get in the car and drive for twenty hours straight and he would just sit and not say one single word.  Meanwhile, I would be all up inside my head..."Why doesn't he talk?  What is wrong with him?  Did I do something wrong? No, I know I didn't do anything.  It must be HIM.  He must have  stick up his rear end about something.  I wish he would just SAY what is wrong and move on.....and on and on" So, twenty hours into this hypothetical car ride I would say "WHAT IS YOUR PROBLEM?" and he would say, "Nothing. I am just sitting here."  He's quiet and happy as a clam.  Meanwhile, I could use some high blood pressure medication.

The Bean is a lot like him in that respect.  He talks to me when we have a conversation, but he doesn't start up the conversation.  So, he sits in the front seat and The Breadman sits in the backseat and I drive along saying, "What do you want to do?' and no one makes a peep.  Crickets chirping, I swear to you.  "Anywhere you want to go?"  *Chirp* "Anything you want to do?"  *Chirp*   So, my mind starts going again...."What is THEIR problem??????"  Finally I just get perturbed and go where I want to go and do what I want to do.  And you know what - they are okay with that.  They don't mind.  Jeez.

Okay, so back to today.  No one said if they wanted to do anything or what they wished we could do, so I just started puling into Thrift Stores.  Ha. That will teach them.  (Not).  I had heard that one of the huge Mega Churches in the area had opened a new thrift store in the neighboring town, so I drove up to check it out.  It was pretty big and they had a good selection, but not a ton.  I did find a really neat old wooden display rack for magazines or brochures that I was contemplating, but I decided to look around the rest of the store before I committed to it.  When I decided to go back and get it (you know where this is going, right?), someone was looking at it.  Even worse - when he turned around - it was one of my FRIENDS.  Ack.  Actually, I'm glad that if I didn't get it, someone I knew was getting it.  Lesson learned - take it with you and make decisions while it is in your possession.

So, here's what I bought today and one thing from yesterday. 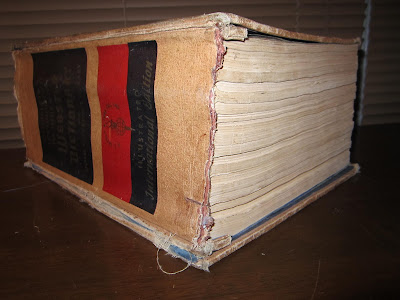 I found this giant old Dictionary at Goodwill.  It wasn't priced, but it had about nineteen of their color coded blue tags on it.  According to the price list, it should have been $2.00, but since it had nineteen stickers on it, I feared that it was some sort of new pricing structure - 19 x 2 = TOO MUCH!  I also had a little kids book that I thought would be 50¢.  When I got to the register, the Dictionary (which caused quite a stir from the other shoppers) went right through the register at $2.00 without an eye blinked.  The kid's book, however, didn't have a sticker and four GW employees decided that it would have to go back in the pricing bin since it didn't have a tag and it was an "antique" and dated 1947.  As Cher in Clueless would say, "What ev"  I really only wanted that Dictionary, so that was fine by me.  So, now I am the proud owner of a twenty seven pound Dictionary and I have no idea what in the heck to do with it.  :) 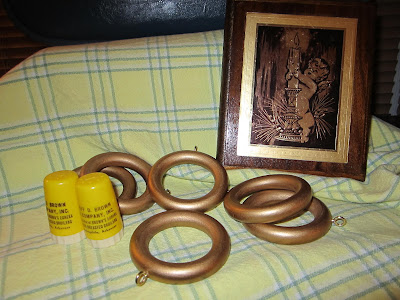 Things from the new thrift today:  a vintage Christmas plaque, a bag of wooden Drapery rings and a set of celluloid S&P's from a Chicken Breeder from the very town I was in (A town famous world over for Chickens and the home of Tyson Chicken).  I always buy the wooden drapery rings when I find them - I have a project in mind for them and a stack of vintage sewing supply labels I have. 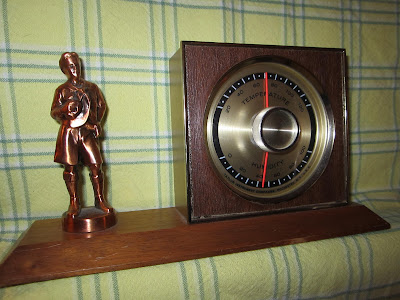 I thought this was neat - a vintage Boy Scout Thermometer.  I'm hoping it will do well on ebay.

Also, this old Boy Scout Trophy.  It weighs a ton.  Another ebay item. 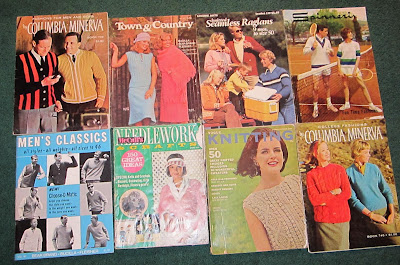 After the visit to the new thrift, I went to one of my old favorites that I rarely ever get to visit.  It is run by the Hospital Auxiliary and the women that run it are near the end of their lives and they remember when everything cost a nickle.  I love the masking tape stickers with shaky 85¢ written on it.  I got all these vintage knitting books for 10¢ each.  They will go to the booth. 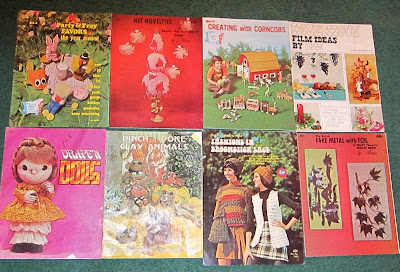 This particular thrift always has a plethora of vintage crafting booklets in mass quantities.  In the past they were 25¢ each, but today they had been reduced to 10¢ each.  I picked out multiples of all of these - I have purchased "Creating with Corncobs" in the past.  It just cracks me up.  I gathered up all I wanted and didn't not bother counting them.  The lady at the register counted with her shaky hands and said, "I counted 18, is that right?"  I said that I hadn't counted them as I was picking what I wanted, but that was fine.  When I got home, I actually had 27.  I can see her miscounting one or two - but nine??????  I owe them 90¢ now. 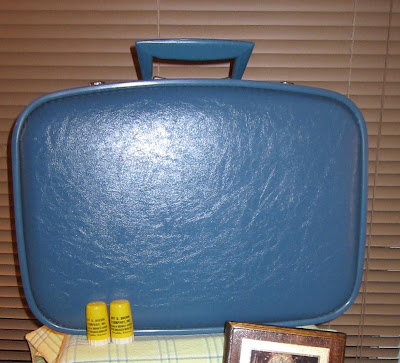 This wee little Samsonite suitcase was waaaaaay under a big wooden shelf and could not be reached.  The Breadman and The Bean wrangled it out for me with a combination of a fireplace poker, a golf club and some belly scooching.  They may not care what we do or where we go, but at least they participate once we get there!

*Like the Booth Chatter isn't enough (thanks for telling me it is okay.....), now I have ebay chatter!  I have a few things on ebay this week (this is not a ploy to get you to bid or buy things, I promise).  But, if you are interested - take a look.  I have bids on everything so far and they had five-six days left to go.  I love ebay when it is HOT!  Shara's junk
Posted by Shara at 10:54 PM