A Tisket, A Tasket

I'm sorting through my Picnic Baskets. 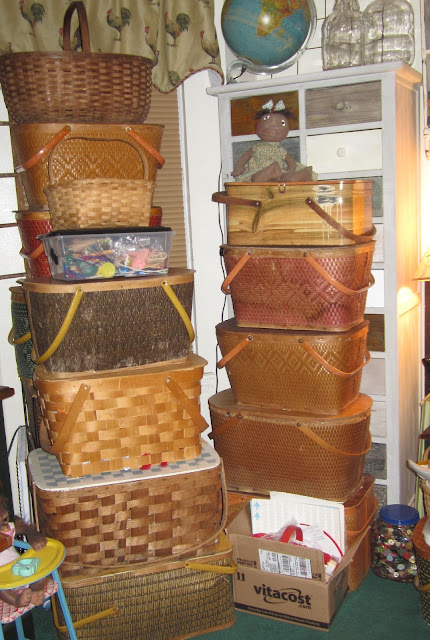 I store all my craft supplies in my picnic baskets.  Right now, each basket is just crammed full of various things - millinery flowers, beads, felt, doll heads, you name it - tons and tons of craft supplies.  My New Year's resolution is to clean out the picnic baskets, get the craft supplies organized and, perhaps the scariest of all.......sell some of the baskets.  There's thirteen baskets in this photo - two in the room you can't see, three in the kitchen and five in the garage.  It's a bit of a sickness. The baskets with the heart on them are keepers - they are all Redman Baskets.  The red "X" baskets will are going to be sold or donated. Now that I know which baskets are staying and going, I am sorting through them and pulling out what craft supplies I no longer want or need.  A good amount of the items could be sold on Etsy or even in my booths, but I want them GONE, so off to Goodwill they will go.  I filled one big trash bag today with stuff to donate and started organizing what was left.  I have only gone through about five of the baskets to start.

I bought that new cabinet behind the baskets a week ago at Hobby Lobby.  I knew it was big in the store, but it is really BIG in my house.  I can't even see in those top two drawers.  The Breadman nearly choked at the thought of me paying retail for something and especially at the $200.00 price on the tag.  But, I paid for it with my very own money from my booth - so ha on him.  I love it.  It has twenty drawers to hold the bulk of my crafting supplies.  Now when I want to make something, all I have to do is pull out the drawer and use out of it instead of digging in multiple baskets.

So far, I have only filled a few drawers - my beading supplies take up two and my paper punches and rubber stamps take up two.  Somethings will have to remain in the baskets, like felt and stuffing since they are too bulky to cram in drawers. 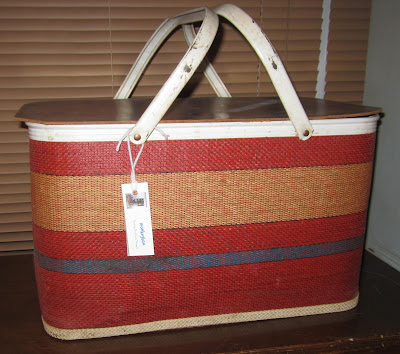 Just to prove I really am trying - here is a basket all sorted out, cleaned up and priced for the booth.  See?  I can DO IT! (Do not tell me how perfect it would be for the 4th of July, because I know that already and am really trying to resist keeping it for that........)

In other matters of the living room..... 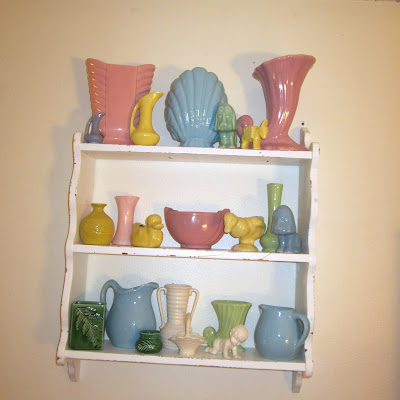 I found this shelf (The photo is crooked, not the shelf......) at the Flea Market last week and it is nearly identical to the other one in the living room, so it is practically a matched set.  I put my pastel pottery on it and so far KNOCK WOOD, it hasn't fallen and cracked the Breadman in the noggin.  It hangs right above his end of the couch. 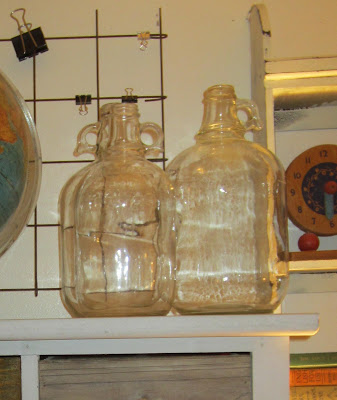 This summer we went to The Breadman's Grandmothers old house and ransacked the shed for treasure.  I brought home these old vinegar bottles - two gallon bottles and one half gallon bottle.  They were absolutely filthy when we brought them home and one of them had kerosene stored in it for about forty years.  I rinsed them out, filled them about half full of hot water, a squirt of dish soap, two Denture Cleaning Tablets (from the Dollar Tree) and a half of cup of rice, then I shook the bejeezus out of them until they were sparkling clean.  I kind of like the simplicity of them as they are, but I think they might look good full of something, I just don't know what yet. Grandma was famous for her pickles, so having some of her vinegar bottles seemed like a good memory to keep.

I'm ready for a change and I want some of my cool old stuff to take center stage.  Until then, the whole living room is in disrepair while I change it up and decide what stays and what goes.  Are you switching things up too?
Posted by Shara at 11:00 PM