It Was Worth A Shot

Today I saw TWO yard sales in my area so I hopped in the car and went looking.  I never did find the first one.  Damn little teeny signs with bad directions.  I knew where the second sale was and I thought it had promise since the ad read:  Large Indoor Sale with a lot of everything.  HA!  Wrong-O.  The sale was outside a building and there were three tables of junk, and I do mean junk and one rack of stinky clothes.  Sigh.  I know it's Winter and no one is having sales yet, but I got really excited when I saw there was a yard sale.  Patooie.  I did buy an old metal tool box that is the loveliest metallic blue color.  I will use it in the booth to hold sheet music.  I'm glad to have it, but it really wasn't worth the makeup and the gas it took to get there.  :(

After those disappointments, I stopped in at a thrift that I have only been to once.  I used to go there a lot, but then they moved to a smaller location and it wasn't worth going to anymore.  But, I found myself in the area so I stopped in - once again, it wasn't really worth stopping.  I did find three weird things to buy.  When I checked out, the guy said, "Boy, you really needed those three things.  I bet you couldn't have lived another day without those three things!"  He said it nice and he was only joking, but he should be happy that I came in and bought the three weird things in his store!  No one else would have bought them, I betcha. 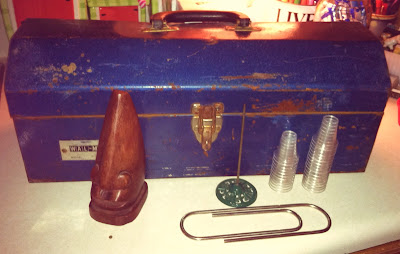 Here's the blue toolbox and the three weird things - a teak nose (I told you they were weird!), a ginormous paper clip and an old receipt spike.  Those little craft cups came from Goodwill later in the day.  I think I have six of those receipt spikes now.  I just throw them in a drawer for now.  I consider it my moral obligation to remove them from the thrift stores so a kid won't poke his eye out with one.

On to Goodwill to drop off some donations and have a look around.  I'd be better off if I only donated, but you know you just have to take a peek.  So, I peeked. 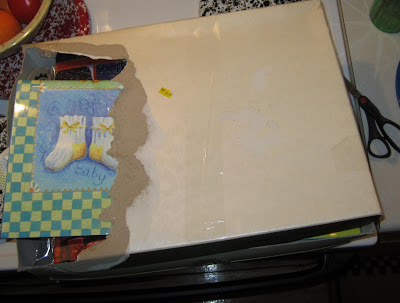 I didn't find much of anything, so I decided to take a chance on this big cardboard box that seemed to have gift bags and wrapping paper in it.  I figured for $5.00 I would take a chance on it.  After all, all my other Spidey senses had rocked for the day, right? 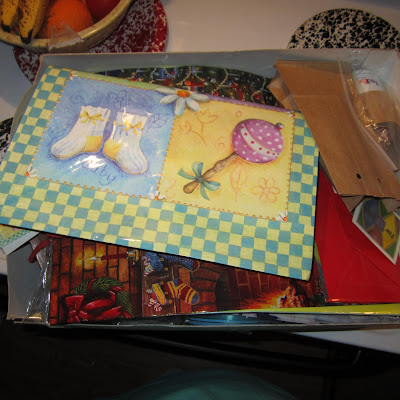 I found a few big new gift bags that I can use. 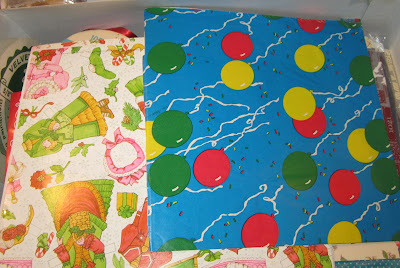 Over thirty packages of older wrapping paper - most still wrapped and including a couple pretty sweet ones. 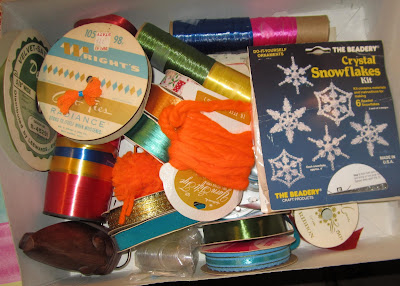 A ribbon - lots or vintage ribbon.  Velvet ribbon, Sasheen ribbon, lace ribbon and some ungodly bright orange yarn that is screaming to be used on The Bean's next birthday.  There's also a bow maker in there along with bow pins and instructions as well as a snowflake ornamen kit.  (Hey!  How'd that nose get in there???) 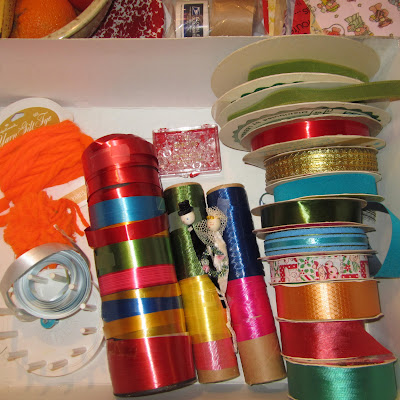 As I sorted the ribbons, I spotted a hidden surprise.  Do you see it? 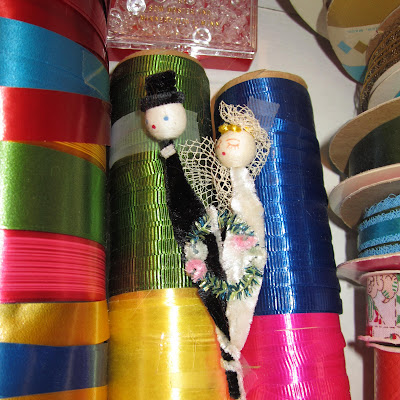 A vintage spun head Bride and Groom!  Eek!  That tiny little find made the day out  completely worth it.  Maybe my Spidey senses aren't entirely whacked after all.
Posted by Shara at 10:50 PM