( I had to use that title at some point, didn't I?)
I still haven't decided if it is good thing or a bad thing to have the Goodwill less than one mile from my house.  I haven't had the best luck at Goodwill in the past when I have visited there, the prices were always pretty high in my opinion and the selection wasn't vintage-y in the least.  However, this new Goodwill is pretty well stocked with a mix of old and new items, the prices are reasonable and things seem to hit the 50% off week rather quickly. 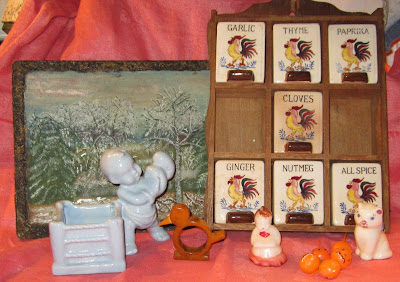 Yesterday I stopped in and bought a total of thirteen items for $9.00.  Here are seven of those items - I do buy non-photo worthy things sometimes too like games and clothes and kitchen items.  I don't usually buy baby planters, but that blue boxing baby was just too darned cute to leave behind and it doesn't have that overall pastel baby planer look.  I wish the spice boxes were all there, but I still think it will sell in the booth.  My heart did a skip when I spotted that Bakelite bird napkin ring in the center.  I only found the one, even though I know they were originally a set of six and that set of six is worth about  $15.00 or more ( more like $300.00 a couple of years ago).  I searched that store from top to bottom looking for it and even looked in the carts of merchandise being put out, but never found another bird.
So, today, on the way to the Optometrist*, which is conveniently located right next door to Goodwill, I stopped for one more look.  But, I didn't find any more birds.  At least I know I gave it a good try and don't have to think that I might have missed them.  (I know someone else might have bought them, but I am trying to to think about that...).
Even though I didn't find anymore birds, I still had to look around..... 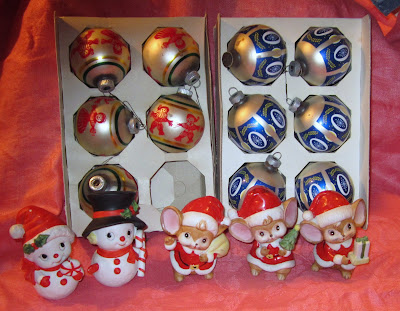 I found a couple boxes of Shiny Brites for accents on some wreaths and the five HOMCO figures.  They are cute, but not really my thing, so they will go to the booth. 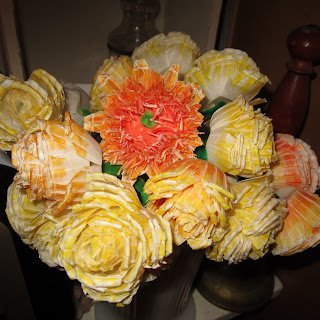 I stopped in my tracks when I spotted an Easter Basket full of these flowers.  I scooped them up and hoped that no one would tackle me to rip them from my hands.  No one tried.  Shock of shocks.  Can you tell that the flowers are all made out of nut cups and pipe cleaners?  They are vintage and dee-vine.  I have them in an old milk glass vase and they look real.  These are on my "to make" list now.
Goodwill is very handy, but I know I have to limit my trips in there or I will go broke!
*Do you have your eyes dilated at the Optometrist?  I had my eyes done at 2:20 this afternoon.  It is now 11:00 PM and my pupils are still enlarged and things are blurry.  So blurry, in fact, I bid on something on ebay earlier and left a maximum bid of $11.00.  I checked on the auction a bit ago and I still had the high bid at $22.00.  I couldn't figure that out, so I went to My eaby and I had bid $111.00.  ONE HUNDRED AND ELEVEN DOLLARS.  Holy crap I was sweating bullets watching that auction end.  It ended at the $22.00, which is more than I wanted to pay, but man, do I feel lucky that some schmuck didn't decide to bid up the auction!  Yowza - that was a close one.  Lesson learned - don't bid on ebay when you can't see!
Posted by Shara at 10:55 PM