Yesterday I went out to the Golf Course where all the big fancy NEW homes were having Yard Sales.  Big fancy new homes usually only have new fancy stuff, which isn't my cup of tea, but we usually do find DVDs, CD's and Video Games, so it is worth a trip out just to look around.
I drove past the first six sales as they looked meager and they were beginning to box stuff up too.  The first house I stopped at was one I go to every year.  It is an older couple that moved here from Louisiana.  They have a three car garage and an attic full of things that used to be in their "Shop".  They put out a mixture of old and new stuff at their sale each year and I can usually find a couple of things.  One thing that she has is a collection of pristine gingham aprons in every color of the rainbow.  She hangs them out at every sale, but they never sell.  It could be the $12.00 each price tag she started at a few years ago.  Yesterday the aprons were down to $5.00 each, but I still don't think she has sold any.  Maybe next year they will be less.
I gathered up a few owl related items and a few other things and my total came to 65¢.  Apparently, she has decided to come down on her prices, because I bought several things for 10¢ each.  As she was wrapping up my purchases, I noticed a box of old tins so I dug through that looking for old tins.  The lady told me if I saw anything I liked to just take it, so I pulled out this old Santa Boot from under the tins. 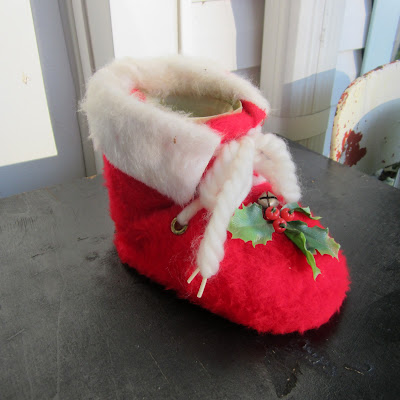 It's vintage and it was free, so why not?
As I was putting it in my bag, I noticed a paper bag with some old Shiny Brite boxes sticking out of it.  The bag was in the back of the garage and peeking out from under a blanket and a few other things.  I don't usually ask, but why not?  I asked if those ornaments were for sale and she said, "Those are the old glass ones.  I didn't put them out because I didn't know if anyone liked those anymore."  I said, "I do!"  She went and got them and asked if $5.00 was okay.  I took a chance and bought them.  That one little box is a really great box. 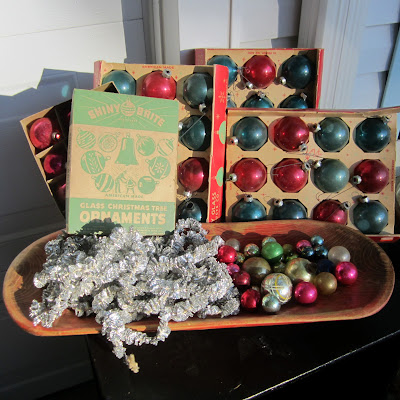 The bag was crammed full of old Easter Grass, so I had to carefully go through it all looking for treasures.  All those miniature ornaments in the bowl where gnarled up in the Easter Grass, but were a happy surprise to find.  Love that old paper garland too. I had one ornament fatality shooting the photo, but I found a replacement in the bag.  So, I still ended up with four complete boxes.  Whew.
I told the lady that I just loved old Christmas things and it made my day to find these.  She looked me in the eye and said, "How old?"  I told her that I loved things from the 1940's and 1950's.  She waited a minute then said, "I have one of those old aluminum trees around here too."  Then she hollered at her elderly husband to come find it.  Luckily, he knew where it was, so he found it quickly. 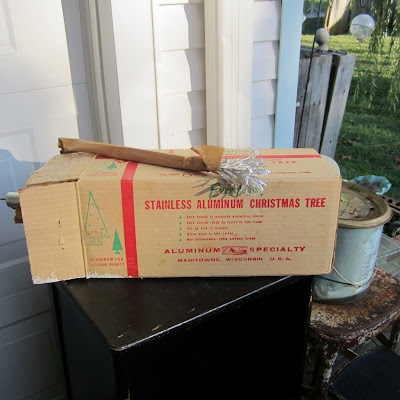 It was in the box and complete. 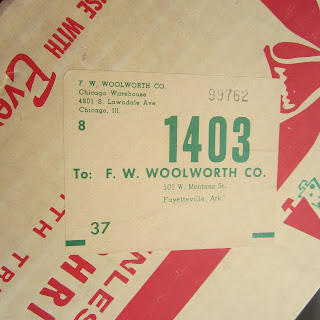 The shipping label was even to where I live.  Perfection! Of course, I got excited, but then I told her, "I better not get too excited until you tell me how much it is." Because you just never know what kind of price someone is going to say, right? 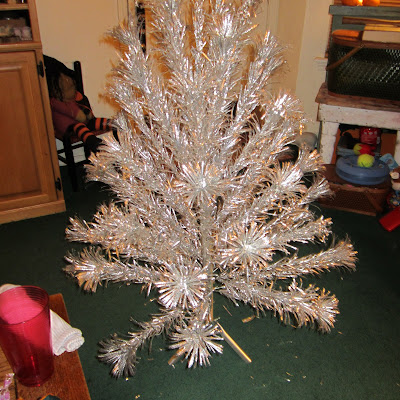 (Really crappy photo of my junky living room - but it was late last night and taken quickly...)
She told me $30.00 and that is more than I wanted to pay (I'm cheap, ya know?) but I knew it was a good one and a money maker.
So, I was thinking and considering it.
That's when she looked at me and said,
Wait for it..............
"I have a PINK one in the attic."
OHMYGOSH.
I didn't say anything, but I must have had big wide eyes and slobbers because she sent her husband up into the attic to get it.  (The Bean later tells me that when he say a glint of pink coming down the steps, he knew I was buying it.  No matter what it was or what it cost.) 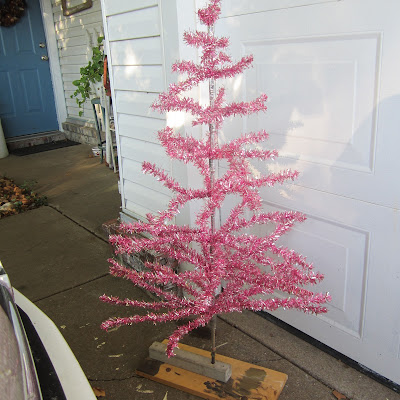 She told me that she would take $40.00 for both of the trees.  I wrote a check, which I think is a first at a yard sale for me, but she took it no problem.  It is missing it's stand, but I have an extra one from another Aluminum Tree, so that is okay by me.  I also have a revolving stand, so it could go in there too.  Pink trees command a high price on ebay - some of the six foot tall ones can go for $600.00 or more.  Crazy, huh?  This one is only four feet tall, but that makes it easier for most people to use on a tabletop or in  a smaller area.  So, it might be worth that much too.  I like $600.00 a lot.  But, I like that pretty pink tree a lot too.  My plan right now is to sell the aluminum one and recoup my $40.00, plus a nifty profit (hopefully) and use the PINK one myself.
As far as the Breadman knows, it's not worth a dime.  So, let's keep that between us, mmmmkay?
So, Garage Sale Gods, I am sorry that I bemoaned all year.  You made my day, my week, my month and my year by bringing this Christmas Glittery wonder into my life.  I will not complain any more.  Pinky swear!
**Sorry to the Facebook friends and YSQ members that already had to endure my Pink Christmas Tree Chatter.  :D
Posted by Shara at 11:11 AM