You Can't Go Back Home Again

When I was little, we lived in a nice big home back in Kansas.  It had a full basement, first floor and second floor.  The second floor was once an apartment and had a full working kitchen in it.  My bedroom was connected to the kitchen, so my Mom and Dad had installed several deadbolts and chain locks on the door to prevent the resident three year old from gassing herself while playing "house" in her fully equipped kitchen.
My Mom kept the American flag out every day.  We had Mission style rockers and a porch swing on the front porch along with old crocks and ferns.  It was a nice home and fit into the neighborhood well.
*Am I not the cutest?* :D

In April, we drove back by the house and tried to take a photo of the house the way it used to be in front of what it looks now.  I had seen it on a blog and thought it was a wonderful idea.  But, the placement of my photo, couples with rainy dreary weather, did not produce the sort of photo I had set out to get.
Last weekend, I drove back by the house to take a closer look at it.  I did not like what I saw.
What a mess.  It breaks my heart. It was such a nice home.  Now it's just terrible.
But, I still have my memories.
My invisible bestest friend lived out in the backyard inside the big tree.
Once, as a tornado was barreling down our street, I remembered that I had left my baby doll in the backyard and my Dad ran out to save her for me.
There was a downstairs apartment in the house next door and a man in his forties lived there and I had a HUGE crush on him.
My Mom used to let me watch Lassie in the living room while she cooked dinner every night.  But, during that hour, the sun would go down and the living room would start to get really dark about the time something scary happened on Lassie.  I'm still scared of that show.
I feel on the floor that separated the living room from the dining room and ripped my knee open on a row of carpet tacks.  My Grandmother came over and put butterfly bandages on it and I got to eat a lot of ice cream.
At one point, my Dad owned eight cars and they were parked in the driveway one after the other.  The back two wouldn't start so he had to ride his bike to work.
I learned to use scissors and cut out coupons in that house.  "Pockin'" was one of my first words - Coupon in baby talk.
When I was four, my Mom's brothers came over and drank apple wine in the front yard.  I went around to each person asking for "just a sip" of Apple wine and since I was so stinkin' cute (see above photo) everyone gave me a sip or two and sometimes even three.  Fast forward an hour when I told my Mom I didn't feel too good as I pitched forward off the toilet.  Drunk as a dog at the tender age of four.
I imagine that on my next trip back, that house might even be gone.  It will make me sad to see it gone, but then again, it's just not what it used to be.
Have you ever tried to go back home again? 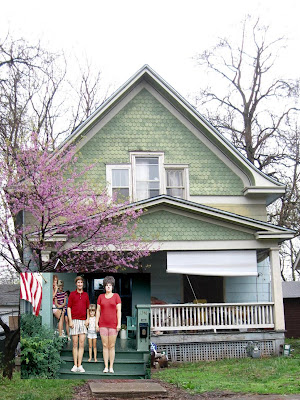 *I opted to PhotoShop the old photo into the new one.  No glare and it worked!
Posted by Shara at 11:00 PM