Don't hate me.  I am a discredit to the junking world.  I am a fraud.  I did a terrible awful thing this week.  I still can't believe I did it.  I forgot the new Goodwill opened on Thursday.  And, it gets worse!  I was actually IN THE PARKING LOT of the same shopping center and I STILL didn't remember.  *Hanging head in shame*

In my defense, my washing machine quit working.  I have only had it five months, so it is still under warranty.  But, I had to get the repairman out here and he had to order parts and it has been nearly two weeks without my washing machine and I am going CRAZY without it.  Especially in this 105 degree sweaty heat with The Breadman's uniforms fermenting in the basket.  (*Gag*)  So, on Thursday, after the repairman finally getting here (yeah!) to fix the machine, or so I thought, only to tell me he would order the parts and be back in a week.....argh.....I got a little crazed and decided I would march myself down to Lowe's and see if I could just swap it out for a new one.  (It didn't work.)  I was at Lowe's and I had a very one track mind on my washing machine.  So, I totally spaced on the new Goodwill.
I remembered about it that night and I could not believe I forgot such an important thing.  Dadgumit.  You don't have to read my blog anymore.  I am a failure.
Friday I was there though, don't you worry about that.  I had to get a gander and see how the prices were going to be.  Prices were a bit more than I like to pay, but then again, I am pretty cheap.  :D  I did find a few things.  You knew I would, right? 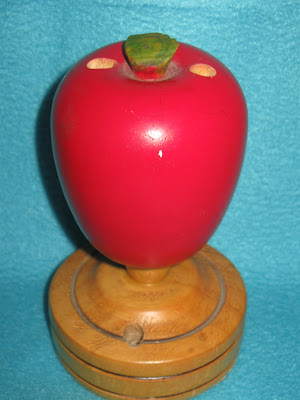 I don't really even know what this is - it is a wooden apple on a base with four holes.  I put pencils in it, but it just looks awkward.  I wondered it it held flags on a teacher's desk.  But, I don't know why you would need four flags.  Any ideas????  It is vintage with a green felt base. 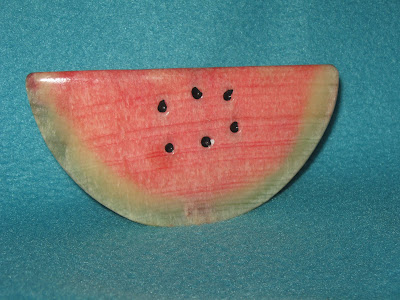 One of my beloved alabaster watermelon slices.  I haven't found one of these in years.  So, that was a happy find. 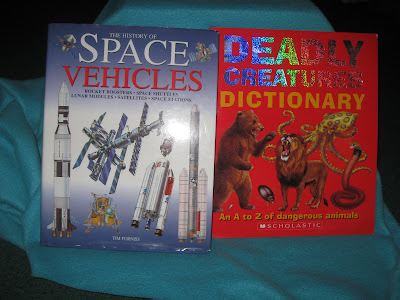 On the utilitarian side, a couple of books for the upcoming school year.  We are going to do an in depth study of space travel and moon landings, because why not get deep into something that doesn't exist anymore? :D  Anyway, the books were 50¢ for children's books and $2.00 for hardback books.  When I went to check out, the guy read about five pages of the Space book before he decided to charge me the Children's price.  Why do they make the pricing so weird?  How about 50¢ for paperback and $1.00 for hardback so you always know what is going on?  Pricing like that drives me nuts.  (But, that space book is really not a kid's book at all, so I got a bargain, so why am I complaining?)

I got this set of NABISCO Building Block cartons to resell.  They are from 1995 and are reproductions of the cartons they used in 1924.  When they are all stacked up, they are five feet tall.  They all nest inside each other for storage too.  I can't find any others to see if they are worth selling.  if they are - I will sell them.  If they aren't - I will have clever storage containers in my office for my "stuff".
My find of the day, I hope, is a Pendleton Blanket with a1970's Arkansas Razorback logo in the center.  Pendleton blankets can bring serious cash and vintage Razorback items can do the same.  So, I have high hopes.  I forgot to take a photo of it, but I will throw one in later.
So, my take on Goodwill is this - it is close and it is semi-reasonable, so I will go again.  Oh, who am I kidding - you know I will go all the time, because you just never know......right?
What did you find this week?
Posted by Shara at 10:44 PM