This morning, I had grand plans to get up early and go to the Super Cheap Thrift.  The Breadman was off today due to the holiday week schedule, so I thought I could go by myself and look around at my speed without having to hurry or worry about anyone else.  But, imagine my surprise when I woke up at 10:00 am!  I never sleep that late, but I was sawing some major logs.  I supposed I needed that sleep or I wouldn't have done it.  Oh well.
Later in the day we were headed to my Grandmother's house to do some more organizing for the Estate Sale (no, we haven't had it yet - August 5th is THE BIG DAY), when we passed by one of those huge fireworks tents full of stuff with YARD SALE signs in front of it.  Screeeeeech! 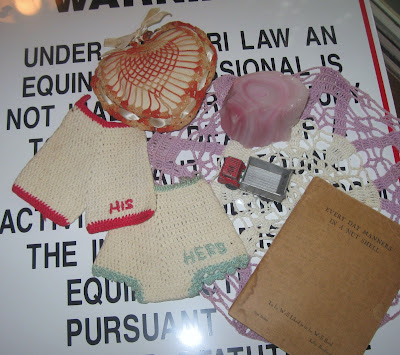 The tent was chock full, but I only bought smalls except for an eight foot folding table for $2.00 which was not photo worthy, but certainly usable.   I also bought the uber adorable His and Hers drawers pot holders, crocheted sachet, doily, tiny Lensey truck, piece of pink slag glass and the Etiquette book all for a dollar.  I will have to blog about the Etiquette book in another post - it is from 1938 and is quite comical.  "When should a child be allowed to sit at the dining table?"  "When it can behave properly, when it can hold it's fork and when it can drink from a cup without leaving a greasy moon on the glass."  It! 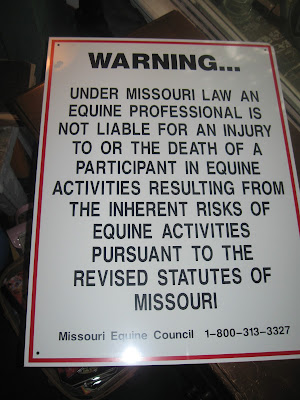 I also bought this very large metal sign for 50¢.  I may hang it out on the shed or the fence, or I might use it as a magnet board in my office.  It's quite wordy and I haven't really figured out what it means entirely.
I mentioned yesterday that I had thrifted Popsicles, seashells and tea this week.  I kind of went off my usual thrifting theme and bought some different things.  Ready to see?
First up:  Popsicle. 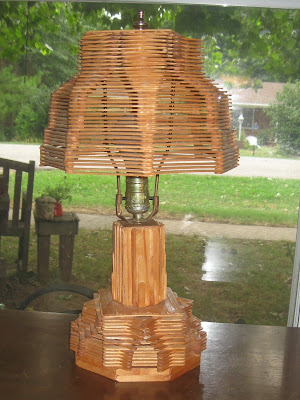 Popsicle STICKS, that is.  Now, I know we have all seen Cub Scout projects made from Popsicle's sticks, but this is really well made and pretty cool.  I think old tramp art is pretty neat. 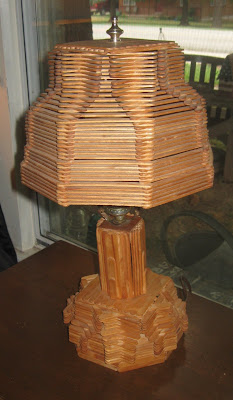 Lots of work went into this lamp.  I plan on selling it either at the Flea Market or on ebay.
Next:  Seashells 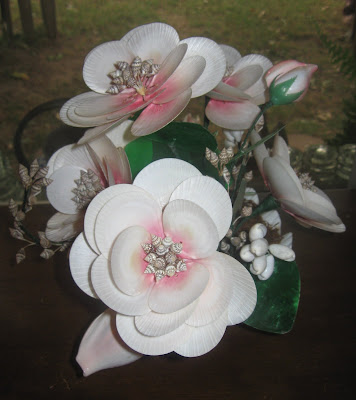 Now, I have never seen seashsell flowers.  But, on Tuesday morning, I read Magpie Ethel's Collection Challenge and she posted about seashell flowers.  Fast forward about four hours and I spot this at the Salvation Army. 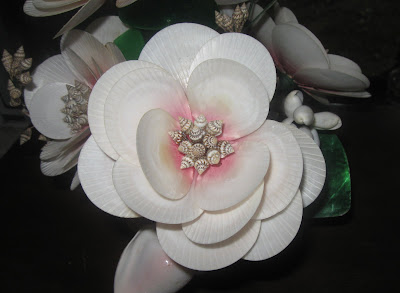 It's a pretty big shell filled with an arrangement of shell flowers, shell rosebuds and other shell flowers.  It's big and somewhat gaudy, but I find myself a bit smitten with it.  The plan is to sell it on ebay, so I must follow through.  It does not fit into my "stuff", so I must let it go.  Right?
Lastly:  Tea 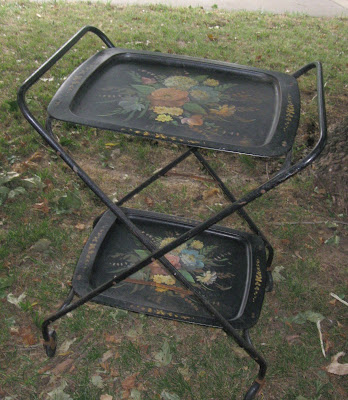 A tea cart.  I bought this at the sale with the Hoosier Cabinet last night.  The trays pop off and snap back on to the sides after it is folded up, so it really doesn't take up much room. 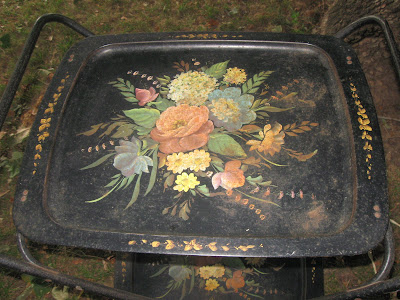 I don't have room for this either, and I rarely ever have the Queen over for tea anymore, so I guess this must be sold too.  But, I couldn't pass it up for the price.
Every time I go to my Grandmother's house, I know that  there is not one more thing that I would even consider taking home.  But, it seems I always end up taking one more thing. 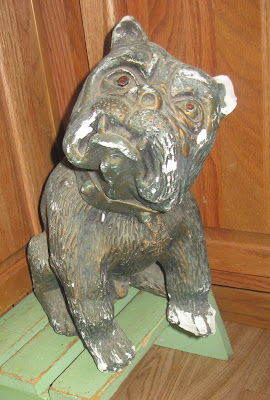 Today I spotted this bedraggled old bulldog out in the shed.  I remember him at her photography studio over the years.  He is pretty chippy and worn, but I think I can clean him up.  He has red jewel eyes and those are sort of freaky, I must admit.
I saw a huge yard sale being set up this today for tomorrow, but it is supposed to be 105 degrees tomorrow.  I think I might just sleep in until 10:00 again!
Posted by Shara at 10:40 PM