I'm My Own Neighborhood Watch Committee

I consider myself to be the Neighborhood Watch Committee, but my neighbors might argue that I am the neighborhood snoop. I don't mean to snoop. It's just that our house is condusive to snooping. We have a big bay window the entire width of our living room. Because of this, I can see all the way down the street in both directions and all of the houses across the street. I usually know everything that is going on. Every thing.

Last Saturday I heard the ice cream truck coming up the street. (What is it about the ice cream truck that makes otherwise rational folks turn into kids? People were running up and down the block to the ice cream truck to buy $2.00 Bomb Pops. I have threatened more than once to open my freezer and make a killing off the neighbor kids selling my coupon purchased Popscicles. I could underprice the ice cream man by half and still make quite a profit.)

But, I digress. After the ice cream truck left, I did a little snooping Neighborhood Watching and saw this to my right: 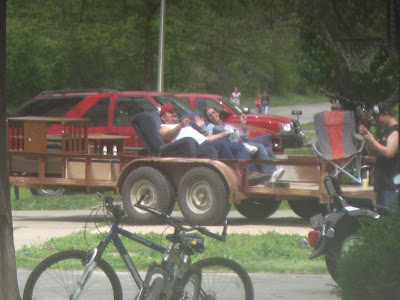 The deadbeat neighbors who are moving out (Yea!) decided to blow $6.00 on Popscicles and eat them in their recliners on the trailer. I will add that the son was also taking photos of them, so even they knew they had officially entered Hicksville. 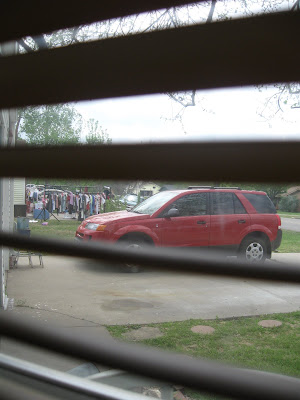 Holey Moley, I gotta look out the window more often! I never did go over there because all I could see was a lot of clothes and some TV's. later that night, I saw their truck pull out loaded with the left overs. On top of the truck was a cool potato chip rack with clips for hanging bags of potato chips. It was shaped like a bird cage and I am sick I didn't know they had that at their sale. It would have been great for my Postcard collection. Or an array of other junk.

I realize this post doesn't make me sound like too much of a snoop. That's because I didn't mention that the lady across the street was planting seeds in her garden while her son used the riding mower to mow her yard, the people that just moved in across the street were airing up the tires on the bicycles, the man on the corner was mowing his yard (he mows every day 365 days a year), there were five girls walking up the street and the mail lady was delivering three doors up. Yes, I am a snoop. A mighty mighty good snoop.
Before you think less of me - a few thrifty finds from yesterday and today. The pickings seem to be slim, but I am enjoying the hunt. I don't need to drag boxes of htings home, so a treasure or two makes me happy. 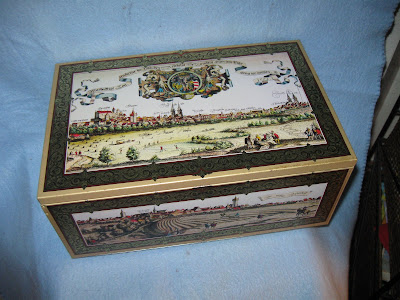 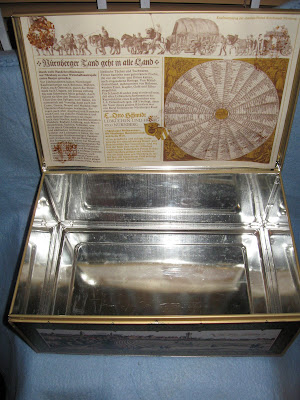 Any ideas? I have forbidden myself to bring home any more tins as I have hundreds (literally) but I plan on using this one to store my craft supplies, so it is useful and not just clutter. 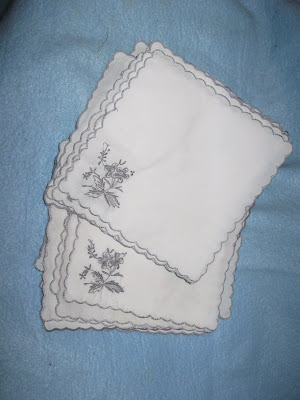 Linen cocktail napkins, embroidered with gray flowers and matching trim. 27 in all for 50¢. I am not a linen napkin kind of gal, but sometimes you just have to grab a deal, you know? 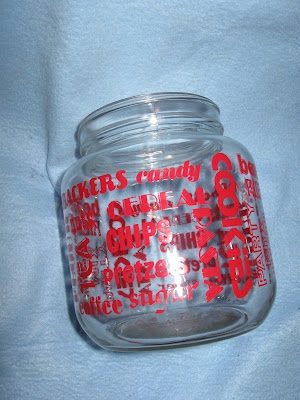 I love this jar with the red writing all over it. It reminds me of a 1980's Sun Tea jar, which I so do not love. But, this jar has character. Candy Flour Sugar Coffee Beans Rice Crackers Party Mix. It was only 25¢, but since it was missing it's lid, the lady at the thrift gifted it to me. I wouldn't have wanted the lid anyway, it was most likely red plastic and would have taken away from it's coolness factor. I plan on using it as a vase to hold bouquets of Zinnias this summer , so I didn't need a lid anyway.

There are quite a few sales in the paper in my small town and we have plans to go to an outdoor flea market community yard sale on Saturday. I hope the Junk Gods are smiling down on me!
Posted by Shara at 9:25 PM