I finally started listing a few things on ebay. I put a link to my auctions on the side bar. I really don't like blogs that are big blazing ads for thier ebay auctions, so I hesitated to link mine. But, I get a lot of comments and emails asking me to let them know when I list certain things. So, forgive me.

I had a nice surprise ending on an auction this weekend. 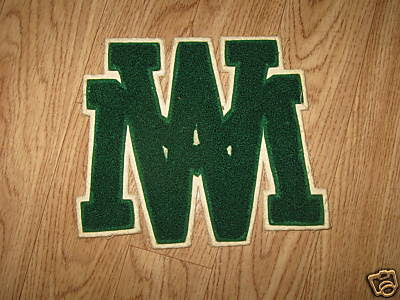 I bought this vintage letter from a school at the big estate sale a couple weeks ago. I didn't know what school it was even from, but I decided to grab it for 50¢. As I was paying, the man running the sale gave me a brief history on it, who it belonged to and how she knew the homeowner. He never did tell me what school it was from though. My friends on Yardsalequeen told me it was from William and Mary. So, I did a little research on the letter to get a rough date for it and did a little more research on the lady that it once belonged to and the lady that I bought it from and then I posted my auction. It had a bid pretty quickly at $9.99, but sat at that price until the morning it ended when it JUMPED up to $102.50. It ended at that price, I got paid immediately and it has already been mailed to the lucky new winner - someone at W&M Library, in fact!

I paid $6.50 to mail it plus the listing and final fees,but I think we can all agree, the profit margin on this little find was through the roof. Yea!

Last Thursday I ran into the Super Cheap Thrift. I spotted this dog figurine on the bottom shelf, sort of upside down and uninteresting looking. But, I could tell he was older and he did something - he had a wind up key on his back - but what he did, I did not know. I thought maybe it was a music box. Since it was the Super Cheap Thrift, it was priced right at 55¢, so I thought I would buy it, and figure it out later. 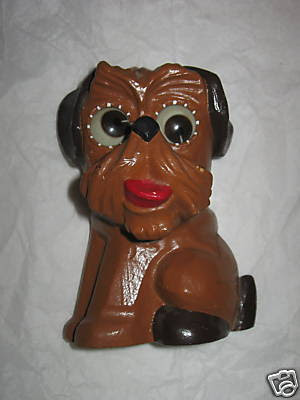 I brought it home and started trying to research it and figure it out. I finally removed the plate behind the wind up key and discovered it say J Oswald Clock Movement. Hmmm....so it must be a clock, but how on earth do you tell what time it is? A little internet and ebay research helped me discover that it is a rotating eye clock. See those little white marks around his eyes? Notice that they are laid out like a clock. Then, inside the black of his eyes, you can see the gleam in his eye. If you see where the gleam is - you can see what time it is right now. So, in this photo it is between 2:00 and 3:00 in the left eye and 27 minutes after the hour in the right eye. So, it is 2:27. And it was when I took the picture! Cool.

A little more research, a few photos and I had him listed by Saturday night. I never even saw the first bid of $19.99 before it jumped to $28.00 and then up to $107.50 today. It doesn't end until Saturday night, so I think I will be spending a lot of time in front of the computer hitting REFRESH over and over until it ends.

It's really fun to find a little something at the thrift or sale, list it and have it be a surprise ending. It makes me not feel guilty about going to the thrifts and to the sales if I can make some money on a few things. it also doesn't make me feel guilty about keeping a few treasures too!