I have a nasty habit. A habit that costs me money and clutters up my house. A habit that temps me several times a week. No, it's not the thrifting habit that you all know about. It's a deep dark secret. Deep breath. I am addicted to Claw Machines. Yes, I said it. I have been stuffing quarters in the claw machine for years. It used to cost a quarter to play, then it jumped up to fifty cents and now, gulp (!) some of them even cost an entire dollar to play! I am more selective now when I play, trying to only get the bigger, nicer items. I have an uncanny knack to win nearly every time and more times than I can remember, I have drug two and even three items over in one scoop of the claw. I don't drink, smoke or gamble, so what's a couple bucks in the claw machine?
A few weeks ago, I spotted a John McCain doll in the claw machine. I slid a dollar into the slot and won him! 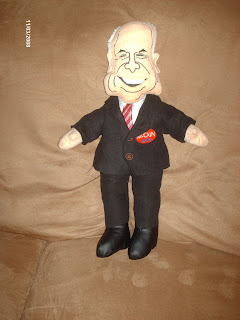 I kept commenting that I wished there was an Obama in the machine, but there wasn't then and hadn't been one in there since.

Until last Friday. There was a Hillary and two Obama's in the machine. Getting close to election day, they had placed them in places that were easy to get. A man ahead of me managed to get Hillary. But,that's okay, I got Obama. 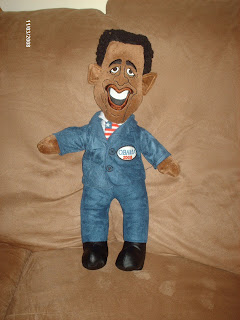 The Bean knows that tomorrow is an important day - a historical day that will go in the history books. So, I want him to keep John McCain and Barack Obama for his kids someday. (Wouldn't I like to have a JFK doll now?) 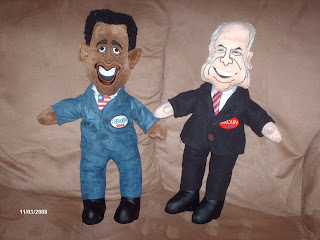 There will be no political views, rants or raves from me. Just showing off my wins. That's all.

And, how do we celebrate any big event at my house? 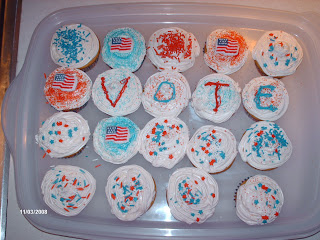 Baked and decorated by The Bean.
(Today I took down the Halloween decorations, put out the Fall and Thanksgiving decorations and we baked patriotic cupcakes. Tomorrow I have a trip to the Super Cheap Thrift planned to raid the Christmas shelves and then on to Oops for even more Christmas delight. I honestly have no idea what day or month it is as I am in total holiday confusion!)