I hope everyone had a good Thanksgiving. We honored our long standing family tradition of a mashed potato snowball toss and a new tradition - breaking and entering! The Bean and I went to my Dad's house for turkey sandwiches and pie. Not your usual Thanksgiving feast, but good, nonetheless. After dinner (our lunch as it was) we went on a long drive around the lake where he lives. We drove around to the other side of the lake so we could look for his house from that angle. We stood on the bluffs overhanging the water which is about 100 feet deep in that particular area. 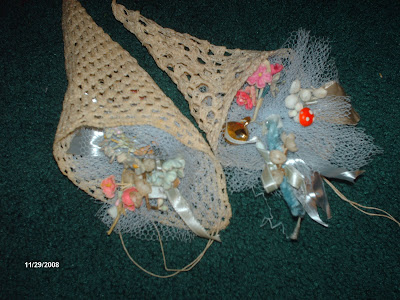 Two vintage starched doily tussy mussies with vintage millinery flowers, tiny toadstools, ribbon and lace from the 5¢ ornament bin at the Super Cheap Thrift. One has a tiny golden football attached to it, which does bewilder me a bit. Possibly a homecoming boutonniere?
The rocks are smooth with wear from the water and there are pits from rocks sitting in the same spot for thousands of years. Now, you don't all know my Dad, but for those of you that do, none of you will be surprised to hear that he found a penny wedged inside one of those pits. It was really worn and dented, but we finally made the date out as 1950. Only my Dad could find money that had been in the water for about 58 years. He has an eye for things like that. 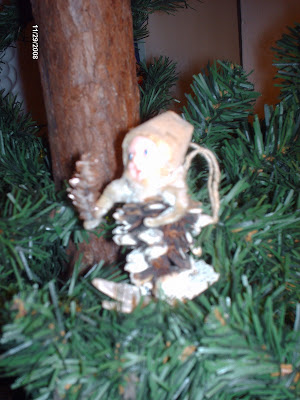 A treasure at the bottom of the 5¢ bin at the Super Cheap Thrift. One tiny pine cone gnome complete with tiny glittered skis and a bottle brush tree. (A bad photo taken at night in a dark room). I recently read an article in Country Living (or was it Country Home?) about these and fell in love.
After our nice relaxing drive and walk, we finally made it back to his house. The glass of eggnog and glass of water I had earlier was now sitting heavily on the old bladder and I had to go. Bad! That's when my Dad hopped out of the car and said, "%$#&!" My keys!" He had left his keys in his truck in his locked garage and locked the front door behind us when we left. We looked in every window hoping to find a window unlocked or perhaps a gremlin waiting to let us in, but to no avail. He has a sliding glass door leading to the patio, so we decided that might be our best bet. He had left it unlocked (yeah!) but he has a board in the track to keep it tightly shut (boo!) so we were certainly locked out. 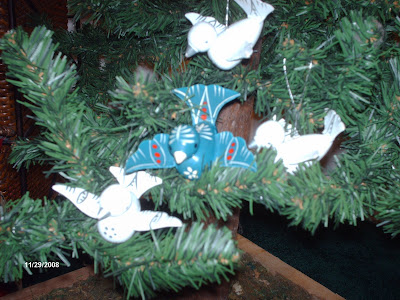 Four vintage wooden JAPAN birds. I have had one yellow one for years and loved it. Now it has some company at long lost. Dug out of the 5¢ bin at the SCT.

The Bean got our tool kit out of the VUE and, between the three of us, two screwdrivers, a pair of hedge clippers (don't ask) and a perfectly aligned kick by The Bean, we managed to hillbilly lowjack the door open one full hour after our mission began. Oh, it was a great moment of high fiving and excitement as we ran into the house. Not to mention I finally got to use the bathroom. (Whew). 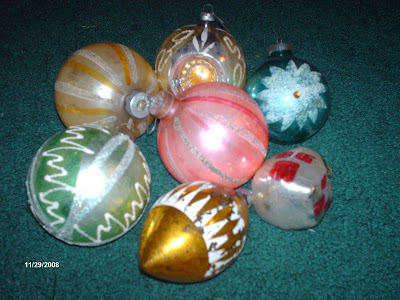 More 5¢ finds - An assortment of vintage ornaments - the house is marked West Germany, the indented ornament has three indents around the outside and the blue ornament matches the pink one I found last week. The other three remind me of these big fluffy minty meltaway candies I had as a child.

I mentioned in my Thanksgiving post that my Dad still lives in the house where I was raised. When I moved out I pretty much took everything that was mine. But, I did leave behind a giant stuffed bunny. He has been sitting in my old room for 24 years since I moved out. My room is now a bar (Named the "Holiday Bar" because it has a permanent Christmas tree and every other Holiday represented in the room) with a poker table and lots of scantily clad beer posters, but the pink bunny just sat there like he belonged. After time, my Dad put some Mardi Gras beads around the bunny's neck and a top hat on his head. Then he really did fit in. 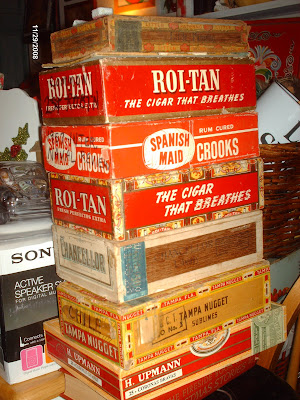 FREE cigar boxes from the SCT. As I was leaving my donations, I spotted boxes and boxes full of hundreds of cigar boxes. Newer ones on top, older ones on the bottom. The lady told me to "take all you want". I took these few and now I wish I would have taken the rest of the cool old wooden ones. Even though I had permission, I felt odd taking from Donation pile. But, now I am worried they will throw the rest in the dumpster. (Ignore that crap in the background!)
I got him for Easter when I was six years old - our first Easter in our new house in Arkansas. The year before, on Easter weekend, we had visited Arkansas looking for a house. We were staying at the Holiday Inn while we looked. On Saturday, I was on the floor playing and for some reason, I looked under the bed in the hotel room. That's when I spotted a shoebox. "Treasure!" I thought. I pulled it out and when I opened it, I couldn't understand what I was seeing. It was a shoebox full of chocolate bunnies, foil wrapped eggs and grass. "What?" I thought. I really didn't understand what I had just seen. A few years later I realized that that was the day I discovered "There is no Easter Bunny!' My Mom had brought the goodies for my Easter Basket in a shoebox and hid it in the hotel to keep my believing, and I had found it. Anyway, I must have mentioned it to my Mom, because the very next year, I got the bunny. The giant, taller than me, very expensive FROM THE EASTER BUNNY Bunny. So, he must exist, right? 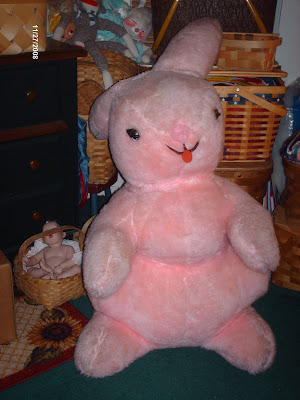 Mr. Bunny at home at last. Sadly he had to be relocated to the garage for the Christmas tree. But, he will return this Spring. You can count on it! (Ignore that crap in the background too!)
Secretly, since my love of vintage crept into my life a few years ago, I have been wanting to bring my bunny home to my house to live with me. So, on Thanksgiving, as I patted him on his head and my Dad said, "He's yours, take him." So I did. We put him in the backseat and seat belted him in for the ride home. The Bean and I took a detour to look at the Christmas lights around the square on the way home. We had all the windows down as to not obscure the view and so we could hear the music. I did notice people looking at us as we drove by and a few smiled. Now I see that it just might have been because we had a four foot tall pink bunny seat belted in the back seat on Thanksgiving Day! Ya think?
Posted by Shara at 9:46 PM