Have Yourself a Junky Little Christmas

It's no secret that I love junk. Things that others cast aside. Rusty stuff. Chippy stuff. Half broken stuff. Junky stuff. I bring it home and tend to put it in the yard or in the garage or in the shed or in the other shed until someday I will find a use for it. Well, today, I found a use for some of my favorite things. 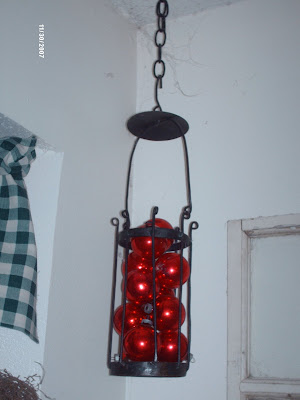 I got this very old iron lantern at the thrift a year or so for 75¢. It is very heavy and all crudely sautered together, so I know it's old. I filled it with old Shiny Brite ornaments for that holiday touch. And, yes, I see the cobweb above it. It's gone now. You didn't think I had a perfect house, now did you? 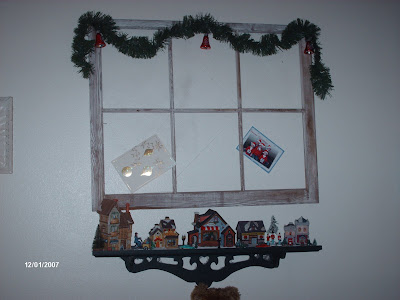 I have a stack of these old windows in the back yard getting all weathered. I bought twelve of them for $5.00 at a sale. I knew I didn't need twelve windows, but I have seen them for upwards of $25.00 each at the flea market. So $5.00 a dozen was a deal to say the least. I took fishing line and made "X's" in each pane to hold the Christmas Cards. I added the greenery at the top and three old Shiny Brite bells. I was pretty pleased with this little endeavor. 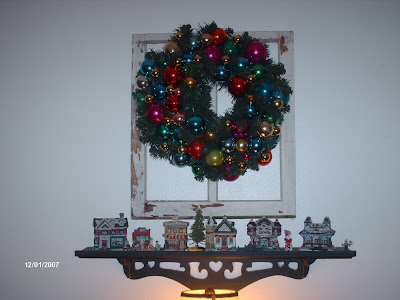 This old smaller pane window came from a yard sale at the house that is directly behind me. I paid for them, drove home and the guy passed them to me over the fence instead of me loading and unloading them. Since I already had twleve of the bigger ones, I really didn't need three small ones. But, I bought them anyway. They were only $1.00 and too sweet to leave behind. This one holds my wreath that I made last year out of vintage Shiny Brite ornaments. (Do you detect a Shiny Brite theme here?) 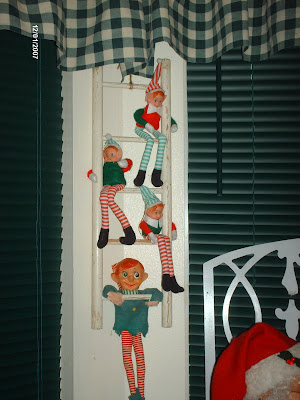 I found this little ladder at a sale once for about a quarter or so. When I paid for it, I commented that it was a sweet little ladder. The lady looked at me like I was a loon and told me it was side rails off an old baby bed. Oh. Well, it still looks like a ladder to me. The elves think so too. That white thing off to the right is the front off an old china cabinet door. I painted it white and it fits perfectly inside one of the smaller sides of the bay window. 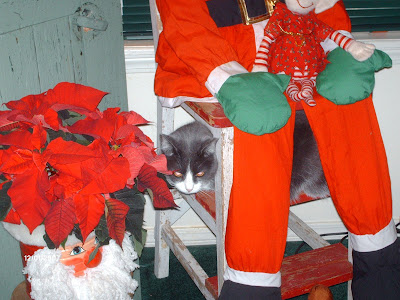 Not the best photo - but here's the fabulous old red and white chair/step stool I bought this summer for $7.00. It had been on the porch holding an old minnow bucket, but I brought it in for Santa. Since it is red and white, it fits in perfectly. That old cabinet to the left is made of old tobacco crates. On the back it still has the writing and the name of the tobacco company. I bought it at a sale for $20.00. I think that was the first time I had ever spent that much money on something. But, I knew it was worth that and a lot more.
~~~~~~~~~~~~~~~~~~ 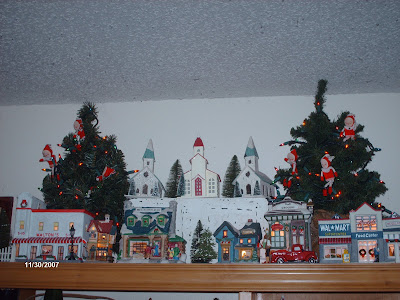 I spent half the day yesterday trying to get my grocery store village on top of the wall unit. Well, not half the day, but at least an hour. It just didn't look right because there was this low point in the center. That's when I decided to add the paper churches to the center. I put an old tin ceiling panel box upside down and put the churches on it. Wah-lah. Perfect! I forgot about those churches until I saw them this year. I ordered them on Graveyard Mall last year after Christmas. They were $10.00 each, but I got them for 49¢ each. I ordered six of them at that price. They are new but really match the vintage stuff. I know I don't always have to say what I paid for everyting. But, I have so much stuff I feel I need to let people know that it's not like I'm not paying the credit card paymetns or feeding the kid to support my stuff habit.

The village is all Grocery Stores. The Creepy Guy and I met at the Grocery Store and worked in the Grocery Business, so we bought a grocery store as our first building in our Christmas Village. Then the next year we found another Grocery Store and so it began. I can't always find a new one each year. I did find a little cheapy one at Wal-Mart fo $2.00 the other day. It helps that Wal-Mart started putting out a store each year, but I can't find one this year. Has anyone seen one?

Hope everyone is having fun decorating and finding new old suprises in their boxes that they forgot about from last year. Have fun playing with your goodies and don't forget to throw in a little junk!
Posted by Shara at 9:23 PM