I got to go to THREE thrift stores today. Yesterday was a flurry of Christmas shopping and grocery shopping. Today I needed a little thrifting and fun.

First stop: the Super Cheap Thrift Store. We parked next to a red pick up and noticed that there was a little dog sitting on the dashboard. Then we saw another little dog siting int he seat and what looked like a bit of white hair on another dog under the steering wheel. The Bean and I looked in the window and there was EIGHT dogs in the truck. Eight teeny little yappers. Seven of them just looked at us, but the one on the dashboard really wanted to get at us. Yap! Yap! Yap! Yap!

Second stop was the City Hospital Thrift store followed by a rather unspectacular trip to the Salvation Army.

These signs are words carved into thick pieces of Lucite. They came from either the football or basketball field house at the University. The lady that is in charge of the thrift is a House Mom at a Sorority and she often brings in University cast-offs. I thought I could use them in some way shape or form in our Homeschooling or just in life. They were 3/$1.00. 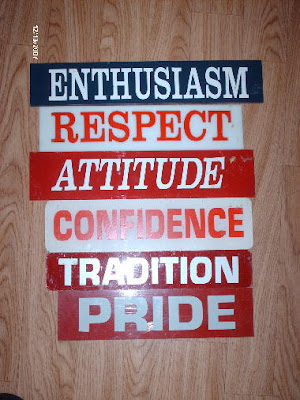 At the Super Cheap Thrift we spotted a lady putting out a cartload of clothes. Hanging on the side of her cart were two Arkansas Razorback Jerseys. I put The Bean on alert and he followed her all around the store and grabbed them as soon as she put them on the rack. They were the right sizes for DH and The Bean and only 75¢ each. I looked them up on ebay and they are $29.99 but the auction says they retail for $100.00, which I cannot imagine. But they were a good deal for us at 75¢! 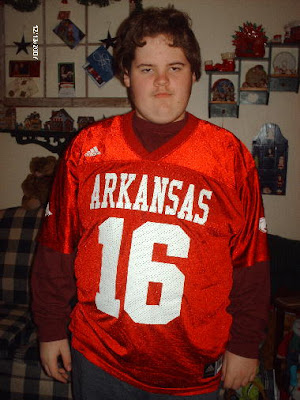 This picture is a mixture of items from all the thrift stops today. The silver tray in the back is engraved "Merry Christmas" and is marked Rogers Silver on the back. This was $1.50. I polished it up and it is practically a mirror now. The little handmade Santa and Snowman ornaments were 5¢ each, as were the angel made out of a silk magnolia blossom and the little vintage plastic basket of poinsettias. In the center is a Santa cup. Now, I have more Santa cups than should be allowed right now. But, this one is a Holt Howard and I was so tickled to find it for 25¢ today. My others are old JAPAN ones, but none of the are Holt Howard. I adore Holt Howard things - they are so charismatic. The 25¢ book is "Christmas Around the World" and tells how Christmas is celebrated in every country. There are also paper dolls for each country. But, if you cut out the dolls for Sri Lanka, you can't read about China and if you cut out the China dolls you can't read about Sweden and so forth and so on. It's from the early 1970's and not very well planned out as far as the reading and cutting is concerned. 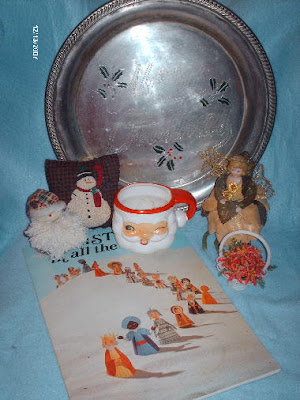 A white swan for my Matte White Pottery Collection. This one has a glossy glaze on it and I really prefer the Matte glaze. But, I have several pieces with the glossy glaze that I display near, but not with the Mate White. This one says, "Merry Christmas - Love, Helena" on the bottom. I am such a sucker for anything someone handmade! 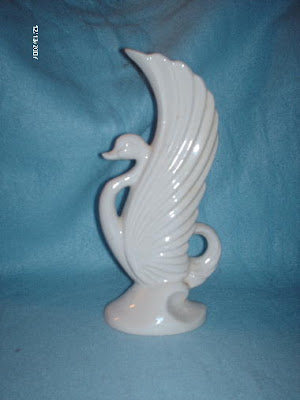 And, lastly a really blury bad awful photo of a piece of costume jewlery that I picked up at the Salvation Army. It is a really pretty shade of yellow and made of all glass beads. The clasp says Western Germany on it so I know it's old. I am pretty sure with the exception of an orange FireKing bowl that this in the only other vintage item I have ever found at the Salvation Army. I had to buy it then, right??? Only $1.00, so no harm done. 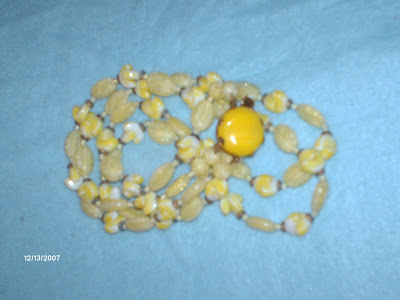 Happy Friday! It's going to snow and be 15 degrees here. Yikes!
Posted by Shara at 9:41 PM