Wednesday is the DH's day off. Did you know that there is no fresh bread baked on Tuesdays (so none to deliver on Wednesday)? So don't go to the store for fresh bread on Wednesday. So, since I had both the guys at my disposal, I worked all three of us to death. I wanted to get the outside Christmas decorations up and done, but it was so windy that we couldn't put anything out. We did "un-decorate" and take down the scarecrows, pumpkins, etc. I also moved most of my "junk" out of the yard. I do like to incorporate some junk with the Christmas, but too much makes it look junky. Not cool junk. Just junky. The boys were supposed to rake, mulch and bag the leaves, but once I noticed how windy it was, we raked them into the ditch and Wah-lah, they are gone. Thank you Mother Nature!

So, here's the big unveiling of the living room. Ready? Here goes... 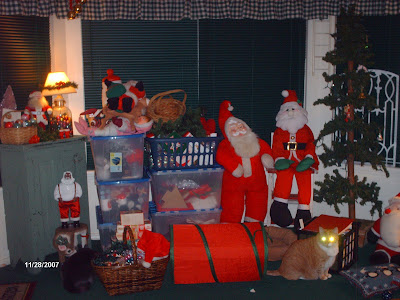 Oh, yeah. Nice huh? Let's just say that I have a bit of work to do! (Holy crap, what's wrong with that cat?????) Oh, and since some of you asked about the cats and the decorations. They looooove the Christmas tree. Our little girl, Little Lady likes to sleep in her bed on her back looking up into the lights and the tree. She will be under it literally all month. ~~~~~~~~~~~~~~~~~~~~~~~~~~~~~~~~~~~~~~~~~~
Out of the blue, the School Counselor called and left a mesage asking if we had made our DECISION yet and gone over our CHOICES yet and blabbety-blah-blah-blah. I think the Superintendent called over there and they said, "Oh, no! We didn't TELL them to homeschool." What ever. I emailed her back because I have no desire to talk to anyone at the school and told her that we left that meeting with the impression that we HAD to homeschool. "Oh, of couse not!" she emailed back. Yeah, right. They are back peddling and covering their tracks. I am over it and ready to move on and so I shall. The BIG BOX OF HOMESCHOOLING supplies arrived today and most of it looks do-able. Some of it looks scary (life Science in particular - I do not need to know how to identify the stomach contents of a camel) but luckily the Math looks easier than what they were doing (not the actual Math, but HOW they were doing it). And, I was THRILLED to see that the Teacher's (that's me) Guide is twice as thick as the Student's Book. Woo-Hoo - I do not have to be a Math Mom. ;o) We've been working on Language and Writing. I let him write silly made up sentences because I think that shows his creativity. "The cat flew to the moon on a paper plate." Not realistic, yet correct grammatically and he can identify the parts of the sentence. So, maybe his creativity will spark. He is very creative, but afraid to show it at school. His usual sentence is "The cat is fat" or something less clever.

Whoops - I promised this wouldn't be a Homeschooling blog. ;o)