This afternoon as I was standing in the driveway untangling Christmas lights, I noticed a young boy running down the sidewalk towards me. He was running really fast and out of control with his arms flailing as he ran. As he got closer, I realized that even though I didn't recognize him, he seemed to be running straight at me. He ran right up to me, stopped and said, "That house blew up!" At that precise moment I heard sirens coming off the highway. I asked him "What house blew up?" and he pulled me over about five feet so I could see beside my house onto the street behind me. That's when I saw the huge plumes of black smoke rising up into the air. It turns out that this boy was walking up the street and he heard the explosion and saw the fire and he was absolutely terrified. He was only 9 years old. He took off running as fast as he could until he found a grown up to protect him. And, that grown up was me. I was thankful that I was out there because I fear that he might have run three miles into the woods or the highway just to get away from that noise and scariness. I am also thankful that he did find someone responsible and not a pervert that would have hurt him since he was so vulnerable. Everytime a fire truck would go by, he would cover his ears and cower by the front door. He was really shook up.

I grabbed the cellphone and keys and took The Bean and our new friend and walked around the block to see what was going on. The Bean wanted to check it out and Cody was still scared so I wanted him to see that the firemen were handling it and everything would be okay. (I also needed to find someone that he belonged to and return him!) When we got back there, there was about six fire trucks from all the surrounding cities, lots of police cars, rescue units, ambulances and people running and standing everywhere. 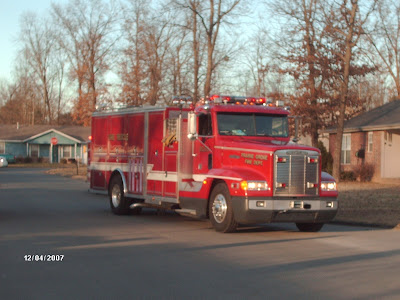 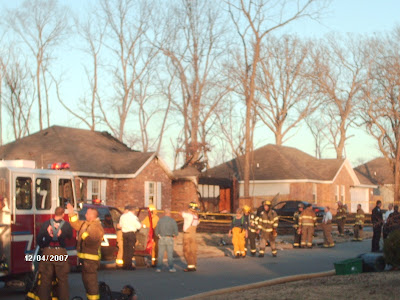 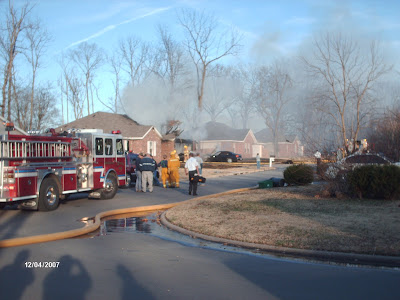 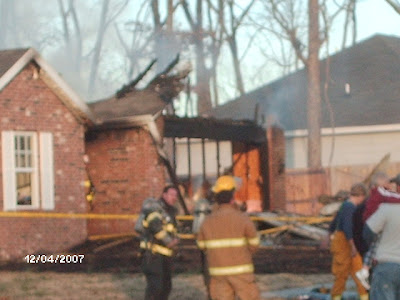 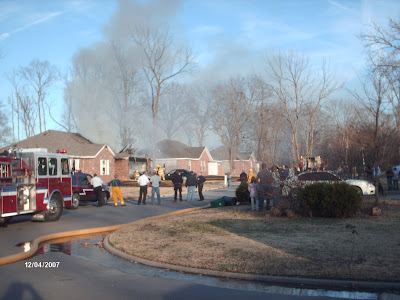 The people that lived in the house were sitting in the grass across the street watching their house burn. They were all okay and they were holiding their cat and dog. They seemed very calm, but they may have just been in shock. I really felt bad for them. The man wasn't wearing a shirt and they were all barefoot. It had reached nearly 70 degrees today, so everyone was dressed lightly, but it was getting cooler as the day went on. Speculation is that they have teen aged kids and their band was about to rehearse. Apparently they overloaded the breaker box and it blew up or at least caught on fire which blew up the gas line or something along those lines. The complete garage and the back half of the house were just gone. The firemen brought them out some clothes and jackets which appeared to be fine, so I am hoping that at least the things in the bedrooms will be okay. I cannot imagine losing everything. Bless their hearts.

Cody's older brother finally came around looking for him. When they saw each other, I imagined a "running through the sunflowers to be reunited" kind of moment. But, instead, the elder one said, "Where have you been you little f^cker? I been lookin' all over this G@d D@mned street for you!" and he drug him off by his sleeve. Poor Cody. He had a bad day.

I watched the EMT workers and the firemen all work together. Every time one fireman would be reunited with another, they made contact by touching their arm or their back. I thought it was really sweet, even though I don't think firemen want to be thought of as "sweet". The EMT workers stayed and checked the fireman and policeman and got them all bottles of water and made conversation with them to make sure they were okay. I'd never really seen firemen at work. I knew they worked hard and had a brotherhood, but I saw it first hand today.

*I wrote this last night, but this morning I read in the paper that that the house is a complete loss. They did get all their pets out safely and no one was hurt. And, the jacket that I saw the man give the man in the fire was one that a neighbor gave him. The lady was saying how nice everyone was being - bringing them water, clothes and such.
Posted by Shara at 9:34 AM