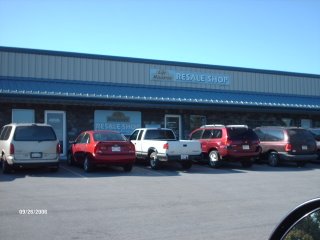 Things that make me happy. My favorite cheap thrift with those wonderful prices of 5¢, 10¢, 15¢, 25¢, etc. and my Dillon's store with the Double Coupon sign out front. I used $30.00 worth of coupons there on Tuesday and saved 66% off my total bill. I never actually noticed that the sign on the thrift says "Resale Shop" and not "Thrift Store". 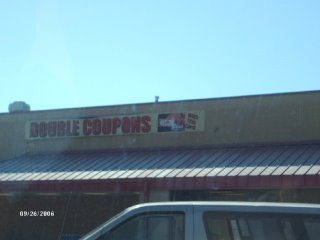 Wednesday we went to IGA so DH could pull up his bread racks. DS and I went into the Video department to look around. They were just getting in these huge boxes of DVD's and Games to sell at $9.99. They let us dig through the boxes before they took them out on the sales floor. We found Kingdom Hearts II for $9.99. This is the $50.00 game that he wanted for his birthday, but I couldn't bear to spend that much! I looked for another one so I could run home and put it on ebay, but it was the only one. But, that was a great deal!

I went to two garage sales this morning. I spent a whopping 45¢ at one for an old hand painted brass bell and two strands of Mardi Gras beasds with chili peppers on them. I spent $3.75 at another sale for three really nice old West Germany tins for $1.00 each, a beanie baby for 25¢ and a red handled potato masher for 25¢. Hmmmmmm. I'm missing a quarter there - I must have bought something else that I can't remember. I love those old tins. I need to sell them. I should sell them. But, will I?

There are 300,000 motorcycles in town this weekend. You can hear the roar on the highway everywhere. I don't live in town, so I think it is cool. The people in town hate it. We are going to the "Parade of Power" tomorrow to see an hour and half of motorcylces in a parade. It is fun to see the fantastic choppers and motorcycles. They throw beads, toys and candy, so DS will be excited to go. At least, I think he will be - he has a bit of a head cold and isn't feeling too well tonight.

I arrived home to a stuffy house tonight. The A/C is on the fritz. It had been making an irritating noise all week and I had the service guy come out Wednesday morning. So, the part is on order which is great news. The nights have been really cool, so it shouldn't be a real problem. But the forecast shows temperatures in the 90's next week. FIX IT!
Posted by Shara at 8:49 PM