Must ORGANIZE! Must Organize! 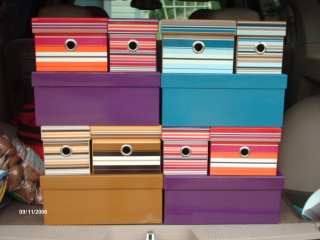 When I originally started this blog it was supposed to be all about my bargains and my bargain hunting. I started blogging about my thrift store and yard sale finds and lately my personal life some. So today I will brag about a DEAL I got this week. At my Wal-Mart there is a whole long delicious aisle of Clearance merchandise. It is where all discontinued items go to die. You can get some really good deals if you time it right. I found a three pack of fabulous storge boxes - one large one, a photo box and one smaller than that. They were $12.96 but I found them for $1.75! I bought four sets of them. After I got them home I realized how cool they are and all the places I could really use these bad boys. So, I called DH who happened to be at the very same Wal-Mart doing his Bread Thing and asked him to go buy the other four sets. But, sadly, they were gone when he went back there. The next day my fellow bargain hunting yard saling thrift storing cheapo friend called and bragged TO ME about these fabulous storage boxes she got at Wal-Mart! She bought the other four! I guess great minds think alike! 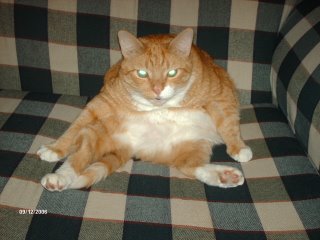 On an unrelated note, this is how I found our fat cat, Tiger, sitting on the couch the other day. He like an old fat man.
Posted by Shara at 9:10 PM