I went back through my IG feed last week, looking for my best thrifted finds of the year.  I bought a lot this year, although it was less than in the past, I think.  But, most of it went to either the Spring or Fall The Junk Ranch, my booth, our shared booth, Lara's booth, Instagram or ebay.  I tried really, really, REALLY hard not to add many things to the house and to my collections.  But, somethings were just meant to stay.  Here are my top nine finds of the year.  (If you don't follow me on IG, I need to explain the car shots.  If I find something and I am SUPER stoked about it, I take a photo on the dashboard or in the seat next to me and post it PRONTO.  As you can see, most of these photos are in the car, so I was HAPPY about them!) 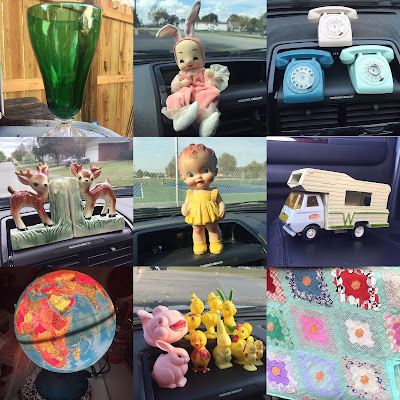 1.  Set of six Boopie Glasses I found at Goodwill for $1.00 each.  My Mom always set the holiday table with glasses like these and I have been on the hunt for some for years.  I have seen them at auctions and antique stores, but they were waaaay out of my price range.  So, finding six for $6.00 was really exciting!  Now that I had them to use at MY holiday table - guess who forgot to use the damn things?  Doh! Remind me next year to use them, okay?

2.  Sweet little JAPAN pose bunny doll.  Found on the Pickin' Time on 59 Yard Sale Crawl.  She wasn't priced, but when asked I was told 10¢.  Uh, yes please.  I already had her twin at home, so she was meant to come home with me.

3.  Three little salesman sample telephones from my beloved Super Cheap Thrift.  The three of us were headed somewhere and I stopped in for a quick look.  A huge rainstorm came out of nowhere so we were there for a lot longer than I had originally intended.  As we watched out the window, The Breadman rooted through the toys and found the tan telephone.  I spotted the 25¢ sticker and I clutched it to my chest.  Then he pulled out the blue one and then the green one.  Isn't that just the way it would work that HE would find the best thing ever?  I sold the tan and blue ones for $24.00 each and kept the little green one.  It is just the CUTEST.

4.  One hot day this summer the yard sales were few and far between, but I managed to find one sale at an older couple's house.  I spotted those deer bookends and swooped them up lickety-split.  They were $3.00 and I actually debated about getting them at that price.  (Yard Sale math - $3.00 sounds like a lot, but then I take a second look and realize it is a STEAL).  I bought them for the Junk Ranch. I really did.  But I worried about them breaking or getting chipped, so I sat them on my shelf and there they still sit.

5.  A Ruth Newton squeaker.  I found her late in the day at the Neosho City Wide Yard Sale after we had spent three hours sealing with a split tire courtesy of a broken street sign post in Neosho.  There was an older man with a scary amount of old moldy dolls, but some old moldy dolls are worth money, so I took a look in the pile.  I squealed when I saw that sweet little face peering up at me.  She was $2.00 and she almost. almost, made up for an otherwise craptastic day. :)

6.  Tonka Winnebago.  I was out thrifting with my Dad when I spotted it locked up in the glass case at a thrift store.  I almost didn't ask the price.  Things locked up in glass cases are generally really overpriced.  But, on a whim, I asked if I could see it anyway.  The lady said, "Isn't that cute?  It's marked a dollar."  S-O-L-D!

7.  Light Up Globe.  I tried to not collect globes.  I mean, I had a couple including another light up one, a tin one, a miniature one and one that The Bean had in his room all well before they were THE THING to collect.  I almost gave them up when everyone else started collecting them.  But, sanity hit and I saved them.  This light up globe is the prettiest blue with it is on.  I paid $7 for this one.  A bargain I realize now, but another one of those items I had to really think about spending that much on. (I'm crazy.)

8.  A collection of old Rosbro and Irwin hard plastic toys and candy containers.  I found these at a backyard sale on the Bargains Galore on 64 Yard Sale Crawl.  This sale was the best one of the day and I bought a ton there.  I had never found any of these old plastic toys before, so I scooped them all up.  I think I paid about $8.00 total for all of them.

9.  A gorgeous feedsack quilt.  Each block is just the most delicious feedsack material surrounded by the loveliest Jadeite green fabric.  I found a sale in a tiny spot in the road out in the middle of nowhere.  It was an older lady and she just had a few things for sale.  She was in the business, she knew what she had, but she still had decent prices.  The quilt was $20.00 and I knew that was a deal. It is perfect and very unusual with it's coloring and edges.  I'm proud to own it.

I usually do a big recap of what happened this year.  But, honestly, the year just flew by and the same old stuff happened just like last year.  I went to the same places, saw the same things, hit a lot of thrift stores and yard sales, decorated for the holidays, sold at The Junk Ranch twice and all the other usual things.  I did have a BIG birthday and The Bean turned 21.  The Breadman worked the same crappy job while looking for a new crappy job and went to all the Razorback games.  I lost a dear Uncle in August that I am still so very sad over.  But, other than that, nothing terrible happened to me or my immediate family, so I am thankful for that.   I had big plans for 2016 and I don't think I accomplished a damn thing except to just keep swimming.  That is all I could do - just get through one day until the next one.  And now, they are almost gone.  Maybe I'll keep swimming in 2017 and get something DONE.  From my lips to God's ears.

Happy New Year, my friends.  Stay safe, stay happy and stay near.
Posted by Shara at 12:00 AM