Hello my friends.  Every night I sit and think I need to blog.  I refuse to be one of the many, many people that has given up blogging.  I like to write so I will always blog.  It's just that sometimes I don't have anything interesting to say or show, so I just don't blog.  I did have a fun adventure last week, but I'm not sharing that quite yet.  But, it was stupendous!

It seems like I am busy from the time I get up until the time I go to bed and I don't even have a "real" job.  I do have our shared booth chock full of stuff and sweet Lara has been nice enough to let me put some vintage Christmas in her lovely booth.  I have been selling a lot in her booth so that makes me feel good about sales IF I am ever able to get a booth in there of my own.  Sales for me have been good in the shared booth as well.  So, that's good.  Of course, I could always use more money so I have been selling quite a bit on ebay.  Even though it is the time of year that I just start thinking about Christmas shopping, it is almost too late to sell on ebay.  People start wanting it RIGHT NOW and at bargain prices.  I just find it easier to not sell in December.  I do have a few Christmas items I am going to list as BIN and see if they sell in the next week.

I'm also going to offer up some things on Instagram since the people on there are so much more laid back and friendly.  They feel like they are buying from someone they know more than just an ebay seller.  One of my recent ebay transactions involved an older man who told me repeatedly that he was a Veteran and he had to take a bus to the grocery store to get a money order to pay and on and on. I'm thankful for his service, but when he didn't pay for two days, ebay opened a case against him, as per ebay RULES.  Anyway, he wrote me and said you ebay people are crooks and you ebay people are cheaters and on and on.  I tried to work with him but he just go angrier and angrier. Finally, his payment came through, he got the item and left me glowing feedback.  I really expected a negative, even though I could have had it removed.  I swear it is always the under $20 sales that give you the most trouble.  I sold a $300 item and never heard a word from the buyer.  It's all just crazy sometimes.

Hey, remember when I said sometimes I don't have anything interesting to say?  Well, that doesn't always stop me from blabbing on and on and on about it, now does it? 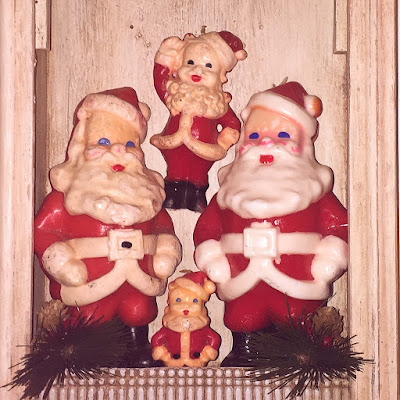 I've been decorating. I started Monday but I still have a ways to go.  I'm doing it slow and enjoying my treasures.  I sold a lot of vintage Christmas at the Fall Junk Ranch and in both of the booths, so I was itching to see what I had kept!  People always ask em how I can stand to sell such wonderful vintage Christmas things.  That's because I keep the cream of the crop for meeeeeeee!  Photos to follow eventually.  It's really the same things I do every year, but it all makes me super happy.  My front porch is Happyville.

I have been out hitting the thrifts on the hunt for more vintage Christmas, but it is few and far between.  I think more people are out looking for it and more people hoard it so it's harder to find.  But, I am hoping that people are starting to put their decorations out and start culling out some things to send to the thrift.  My Super Cheap Thrift had their Christmas all half off already because they have so much more to put on the sales floor.  So, I have plans of going there every time they are open until Christmas.  I went Thursday and got five huge bags full of ornaments for my ornament wreaths. Some of it was junk, so back it will go.  But I got a nice amount of things to add to wreaths in those 25¢ bags. 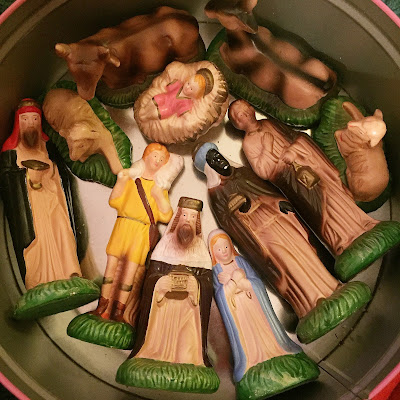 This Nativity set was wrapped up in bubble wrap and newspaper in a baggie.  I took a chance on it and was pleased to find a nearly complete set.  It's missing an angel, but I think that is all.

Yesterday I stopped at Goodwill just as they were rolling out a cart of merchandise.  They do that at 4:30, so that is the time to go, I have discovered. 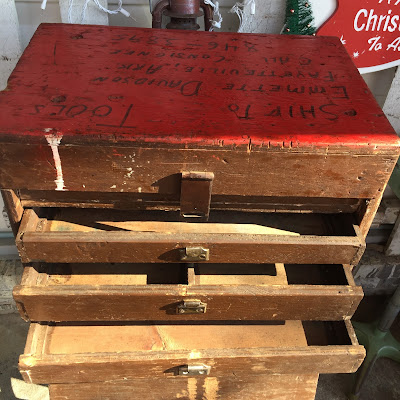 This very old and very heavy wooden tool box was on the bottom of the cart.  I pulled it off and looked at it.  The top opens and the drawers all pull out.  It's really awesome with that red paint and the old address on top.  I decided it was too heavy and too bulky to buy, so I put it back.  The clerk walked over and took it to the furniture area and set it on the floor.  I walked about ten feet away and then I came to my senses and went back and swooped that sucker up!  Well, as much as you can swoop a 40 pound wooden chest up, that is! 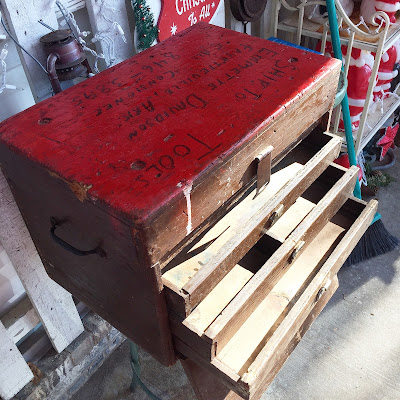 Today I was cleaning out the liner in the drawers and getting rid of the few screws and old files that were in it.  I pulled out all three drawers and found a bunch of great old things under the bottom drawer including three old wooden folding rulers!  I held my breath in anticipation of money taped to the bottom of a drawer, but there wasn't any.  Wouldn't that have been exciting?!?!?!?!

I hope you are all well and getting in the spirit.  I have missed your comments and I really do appreciate all of you!
Posted by Shara at 11:44 PM