The week before Thanksgiving I had an email arrive in my in box titled, "Want a date?"  I almost deleted it because I have had a rash of erectile dysfunction ads and "meet hot Russian Women" emails lately.  But, I took a second to look at the sender and determined that yes, yes, I did want a date!  It was from the one and only Eddie!  Eddie and Keith were making their annual pilgrimage to Arkansas (a 13 hour drive!) to see Keith's Mom and other family in the area.  Last year we had tried to get together, but that is such a busy time that it just didn't work out.  This year I was hosting Thanksgiving, had company coming into town and had lots of cleaning and prep to do so I didn't think I could drive the two hours to meet him this year either.  Eddie said they needed a little escape time, so they headed up over the mountain and came all the way to me!  Can you believe that?  I warned him that I might not be worth the drive, but he insisted.

We met at the Goodwill up the street.  When I pulled in, I saw Eddie in their car and waved at him. He came bounding out all smiles to come hug me.  That was such a nice feeling!  Seeing someone you know, but you don't really know, and they are happy to see you.  Keith is not a thrifter and that was our plan for the day, so he went on his own adventure while Eddie and I went in to Goodwill for a little treasure hunting.

We ended up going to my house and Eddie got to see my not yet ready for company house (oye), meet The Breadman and The Bean and rub the cat's head.  The Bean loaded up with us and we headed out for a day of fun.  We hit nearly every thrift in town that was open and even had Mexican food as per Eddie's usual junking day out meal. I took him to my flea market to see the booth that lara and I share.  I bought some junk, he bought some junk and we had a good time.  It seemed crazy to meet someone you had never spent a minute with and then spend five hours with them.  But, the day flew by and we just had the best time.  I'm hoping we can do it again someday!  Eddie, you're a great guy and I had so much fun with you!  Thanks for coming up to see me! 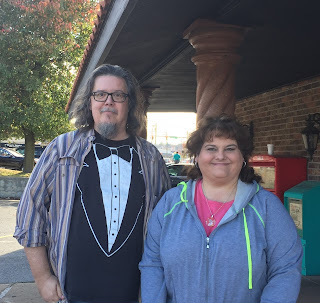 (I look terrible, but what do you expect?  He's wearing a TUXEDO, for heavens sake!)