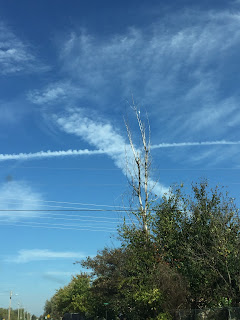 I went to the Trailer House sale again this weekend.  I spotted the big "X" in the sky just as I drove up.  A good sign, I think. They always have a ton of stuff, so I never worry about being first in line or fighting the crowds.  I always find good stuff and the later it is - the cheaper it gets.  Yesterday I had a conversation with the lady having the sale that I NEVER thought I would EVER have with anyone conducting a sale. I told her that I resell most of what I buy.  That's the first rule in yard saling for profit - never tell anyone you resell!  I had been visiting with the lady - she had greeted me at the fence saying, "I wondered when you would be here!" and even handing me an Annalee she had found in a box.  After I paid, I had two tote bags, a cardboard box full and.....wait for it.....a huge trash bag with about 40 pounds of vintage baby and doll clothes in it.  I really wanted her to know that I was not taking all this home and adding to my own hoarder pile.  She said, "Oh I know you part it out and disperse it.  That's why I give you better prices!"  She liked that I do more work to get it into the right hands.  So, I can keep buying and she won't report me to "Hoarders" for their next season.  :D

As for those baby clothes.  They were in boxes and spread out on tarps.  I could see lots of Barbie clothes plus doll clothes and then there were baby clothes mixed in.  You could fill a bag for $1.00, so I did that, but it was taking forever.  Plus, I would find the bottoms to the top that I already had in a bag as I was filling another bag.  I decided I needed all of it.  I could sort it at home at my leisure.  As I put it into big boxes, I estimated that there were 8-10 more bags full, maybe even 12.  When I told her it was about $8-12, she said, "Well, how about $3.00?"  Heck yeah.  Last night I did a quick sort through and got rid of about half of it bulkwise. Today I sorted it out again, getting rid of more and pulling out the doll clothes from the baby clothes.  I thinned it down to two tote bags full, so that's not bad at all.  I found two original Skipper outfits which sell for about $25 each, so I think I will do okay.  Plus, how easy will it be to photograph and cheap to mail?  Bonus! 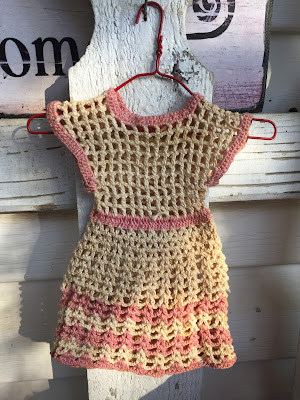 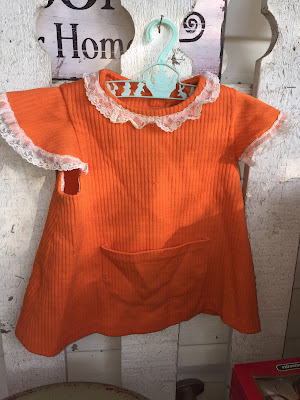 This orange polyester number made me think of Cindy Brady.  Speaking of which, Susan Olsen (she played Cindy Brady), is a friend of my cousin.  They get into the huge political fights on Facebook and she drops the F bomb.  A lot.  Whenever I see these posts, I picture cute little Cindy Brady with her lisp in one of those short, short polyester dresses with her curls sproinging up and down as she saying, "F*ck you". 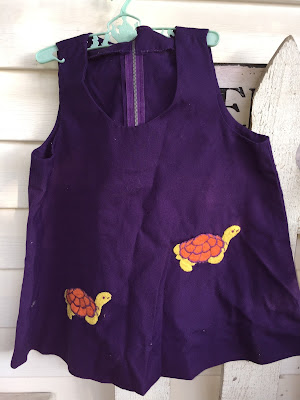 A purple dress with turtles.  Need I say more? 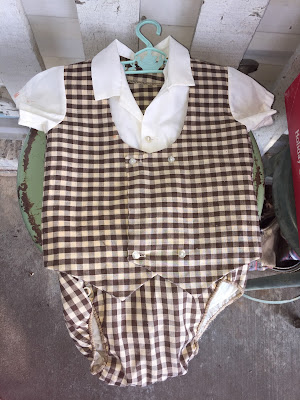 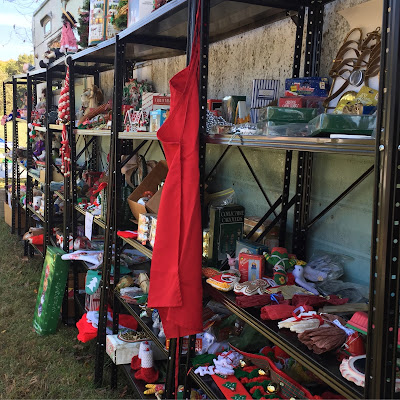 There was a lot of Christmas on those shelves this time.  Lots of newer dollar store stuff that I am not interested in - but you and I both know to look at every item, under every item and behind every item. You just never know what you will find.  So,m I dug in, around and behind and made myself a nice little box of vintage goodies. 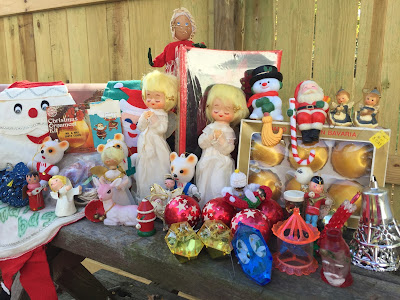 I have never found one of those spinning lantern ornaments!  I got very excited, but it was the only one.  That doesn't mean I won't find more at the next sale (next weekend again!  Woot!).  Love the angel tree toppers.  It's all good booth and/or Junk Ranch fodder.  (***I am having serous remorse about not having that second booth right now for all my vintage Christmas in the shed.  I have an entire booth's worth of inventory just sitting there.  Never mind that I never sold much of anything in that booth last Christmas.  It still had a better chance of selling there than in my shed.  But, still, I made the right decision.  I know.) 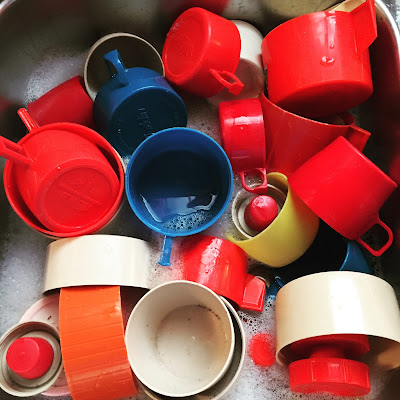 Here they are in my sink getting a soak.  I was able to replace all my missing cups and stoppers which was fun.  Plus, I have a ton left.  I'm thinking they will be good at The Junk Ranch for people that have just purchased a "topless" Thermos. 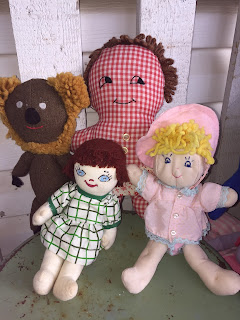 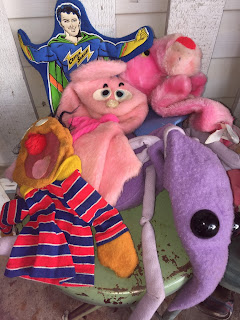 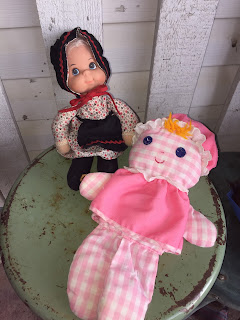 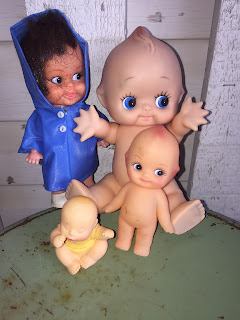 I bought a few more dolls including Fisher Price Lolly Doll, a Dressy Bessy and a few more handmade toys and dolls.  I am a sucker for quirky handmade toys.  All the puppets were 25¢ impulse buys, but they all seem to sell well on ebay.  That's always a bonus. 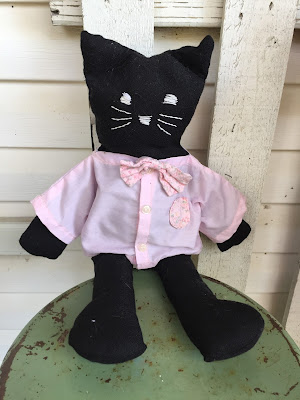 Last Spring I had purchased a handmade cat doll wearing a pink shirt and a bow tie.  I bought him to sell, but he's been sitting beside me on the couch every night.  So, I have developed a bit of a crush on him. 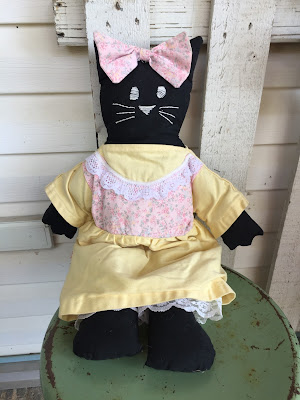 Yesterday as I was digging in the piles of toys I found.....his WIFE. 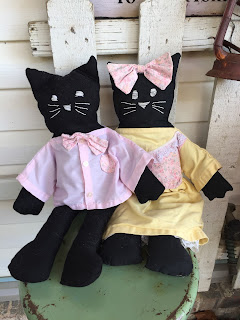 Now they have been reunited after all this time, so I have to keep them.  (I'm pretty sure he had a pair of yellow pants on once upon a time) 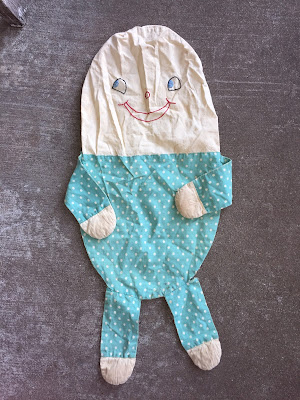 This old Humpy Dumpty was in the piles of baby clothes.  I'm not sure if it's a pillow case, a PJ bag or a laundry bag.  It could even be a clothespin bag.  In any case, it's adorable. 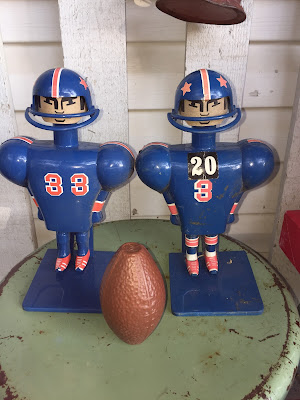 I spotted a box that said SUPER TOE and looked inside to find these football players.  Actually, there were three in the box.  I have never heard of this game in my life.  But for a quarter, I bought it. When I unloaded it from the car, The Breadman yelled, "SUPER TOE!"  and actually got on the ground in the driveway to play with this silly thing.  He told me about kicking it down the hallway at his Dad.  This was a surprise to me because he has nothing from his childhood and never had many toys as a kid.  I offered to let him keep it, but he said no, so off to ebay they will go.

There's another sale this weekend and I am hoping that I don't drag home any more toys!  I have had quite a run on toys lately.  But, then again, if they sell then why the heck not?  Winter is coming and there won't be any sales and I will be happy to have big bags of toys to sort and price and list. RIGHT?  :)

***I posted my Halloween decorations late last night if you missed it down below.
Posted by Shara at 12:01 AM