Let's Dig in the Photo Box

When we were cleaning out my Grandmother's house, I found a big box of family mementos out in her shed.  Mice had chewed away at a few things and I had to throw some stuff away.  But, we were shocked at what we found in that box.  You see, my grandmother was not a sentimental person.  She never talked about her my Mom's dad who died when my Mom was only 16.  She was always mad at him for dying and leaving her with four kids to raise.  As if that was his plan.  She never talked about the kids when they were little.  Once, when everyone was a school, she had a dumpster delivered to the house and had it placed just under the attic windowsill.  She opened the window and every single item in the attic was thrown down into the dumpster.  My Mom's dad was a military doctor and traveled the world.  He had brought her home a doll from every place he visited.  Every last one of them went into the dumpster.  All their old toys, clothes, mementos, everything.  Gone.  So, finding that box in the shed was a real surprise.  My Uncle cried when he saw his report cards and old artwork.  It wasn't that she had saved it that made him cry, it was that she had it all those years and never shared that she had memories or cared about anything. 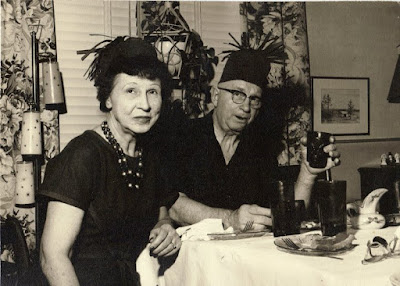 You're all familiar what this photo of my Great Grandparents.  It's my blog header, on my business cards and anywhere that I need to represent as MY domain.  This was my grandmother's parents. Great Grandma Lora (who I called Grandma) hosted all the holiday functions.  I have fond memories of her (Ray died before I was born, so I never knew him) and her festive party hats she made for each occasion.  She had all the LuRay and Fiesta dishes in every color for every occasion, figural funny salt and pepper shakers and freshly made coordinating crepe paper party hats on each plate.  She was the original Martha Stewart.  She died when I was five, but she is still the only real Grandma I remember having in terms of doing Grandma-like things. 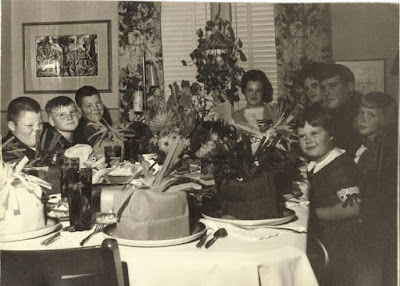 Here is a family party well before I came into the picture.  That;s my Mom down on the far right peeking out from behind her brother, Bob.  And my cute Uncle Brad in the center on the left.  See the party hats on each place setting? 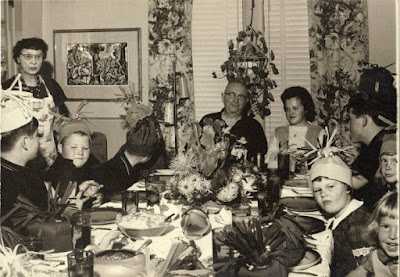 Same party but with Lora bringing in the food and Ray at the head of the table waiting for his dinner. 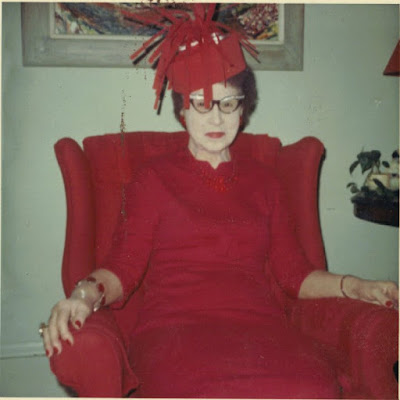 Ray was the Superintendent of the Kansas Schools and wrote many of the old readers.  Isn't that odd that the Superintendent wrote the textbooks?  Lora was a teacher in a one room schoolhouse when the older Superintendent stopped by the school one day.  I think when they ended up together it was a bit scandalous.  Scandalous for 1924 at any rate.  After that, he became a Minister and they traveled around to small schools and churches teaching and preaching.  They were both always dressed very nicely in dark colors.  After he died, she went and bought ALL THE COLORS.  Head to toe pink including shoes, undies, bra, slip and jewelry one day, then red the next and purple the day after that. She even bought a lime green car.  She made her own costume jewelry - she had dressers full of jewelry all in color coded drawers.  Rumor has it that after she died, the family sold off her jewelry in huge paper grocery bags for $1.00.  I really still cannot think about that.  I do have a lot of her jewelry and I wear her diamond every day. 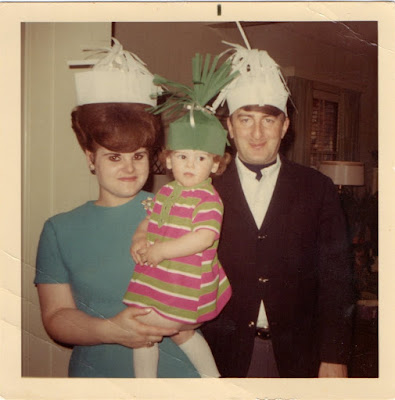 Hey lookie at me would ya!  I got one of those crepe paper party hats on my head too.  This was my 2nd birthday and I was the only grandchild.  My Dad's ascot makes me chuckle.  My Mom looks pretty. 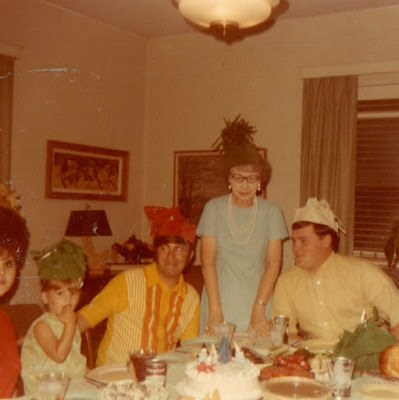 And, my 4th birthday party complete with a CLOWN cake.  Eieeee!  See Grandma in her blue? That's my Uncle Bob smiling at me on the end.  I think my Dad still has that shirt in his closet.  Honestly! 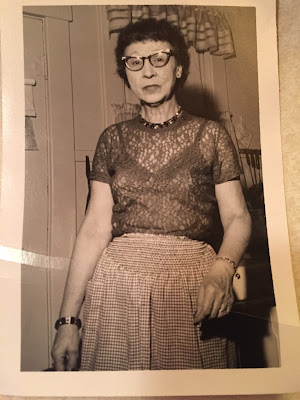 This weekend we drug out the box of photos while my Uncle Brad was in town.  We hadn't looked at them since I found them in the shed six years ago.  It was fun to sort through them and have some laughs and her old stories.  I found this photo,which I had never seen before - my Grandma Lora in a GINGHAM chicken scratch apron. 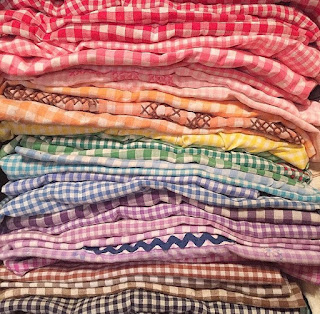 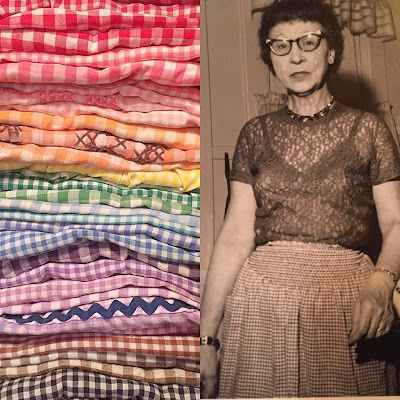 It's my new favorite.  I think it will make excellent business cards.

Thanks for digging in the photo box with me.
I hope you enjoyed it, because there are a LOT more!