Halloween Time: Just in the Nick of Time

Today is Halloween, but it seems like it should be over by now.  I have been seeing people in costumes since Friday since all our schools had their festivals that day, then there were parties on Saturday (THE Party QUEEN), Trunk or Treat was last night and now tonight is actual Trick or Treating.  It must have been one helluva a week to be a kid!  Tomorrow is National Half Off Halloween Candy Day.  Well, I celebrate that holiday anyway.

I don't think I have had all my Halloween out in a few years.  I brought in four totes and managed to cull out two totes worth and just kept the cream.  I took the best of the culls to the booth and most of it has sold.  I have a lot of blowmolds, so that takes up one tote plus. 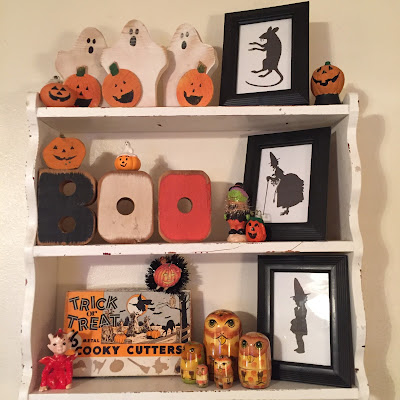 I printed those silhouettes of a website years ago.  I can't find the link anymore, so if anyone know, let me know.  I paid too much for those Cooky Cutters last year at Goodwill ($8), but I had lusted after them since everyone else had a set.  I needed a set.  Mob mentality. 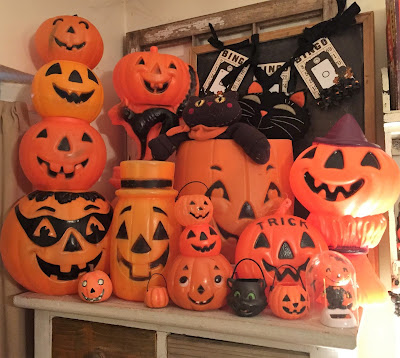 I try not to buy any Trick or Treat pails, but if I see an older one with an unusual face, I have to grab it.  I especially like the little ones meant for the little kids. That burglar one was plucked off a trash heap at an auction.  That big one in the middle back would weigh a ton filled with candy. 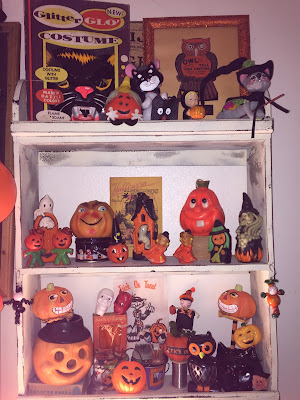 All my favorites go on this shelf.  The Gurley candles, an old costume and some things from my childhood. 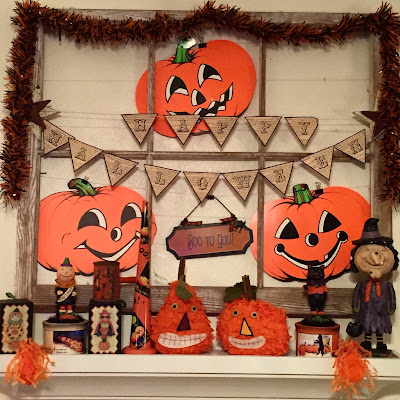 I love the pumpkin faces peeking out in the window.  I don't usually like die-cuts since they are so big and take up so much room.  But these are perfect.  That old noisemaker is rusty and in awful condition.  But it's the only one I have ever found, so I am happy to have it! 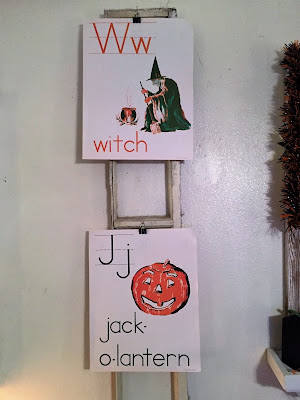 I bought the whole set of the flashcards on ebay.  I framed them and sold every one of them.  But these were keepers, as you can clearly understand! 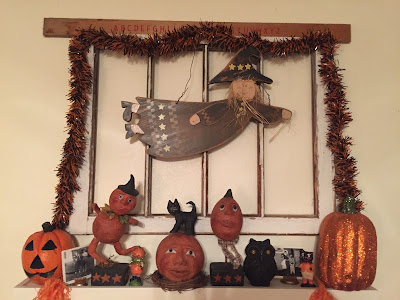 I bought those three guys in the middle this year.  They are cute and whimsical and make me smile.  Plus they were dirt cheap.  ;) 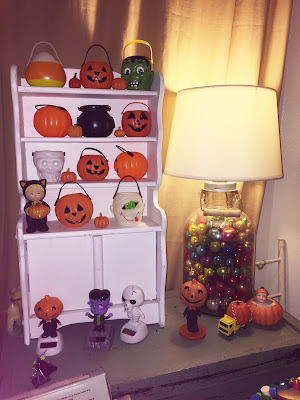 My mini hutch with the mini trick or treat pails.  They are candy pails, but I love finding different ones to add it each year.  Yes, that lamp is full of Christmas ornaments.  It's been that way for twenty years, I think.  A little bling every day of the year. 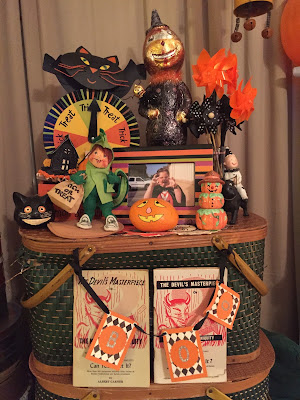 Random stuff plus some old religious pamphlets which I mean no disrespect in using.  But, would you LOOK at those devils?  Holey moley.  I found the trick or treater Annalee for 99 cents the other day. 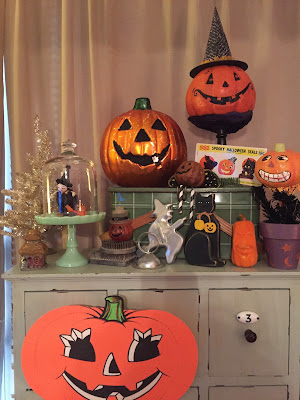 I just bought that little Pioneer Woman cupcake stand the other day as a little treat for myself.  I have the full size cake stand (never mind that it's still in the box, in my closet and has been for over a year), so I needed that cupcake stand!  I added it in to the Halloween because WHY NOT and added in a little glimmery tree becasue WHY NOT again.

Hey - what an awful picture!  I had all these things that people had made for me in swaps and a bunch of diecuts, so I made a banner out of everything.  Putting a different banner up there every month has made me happy this year.

I hope you had a Happy Halloween!  We had more kids come knockin' than I was expecting, so I had to break out the Kool-Aid packets.  Kids think that is the greatest thing EVER.