Today I had an email congratulating me on my anniversary with ebay.  I have been buying and selling for 17 years!  Mostly selling, of course.  I did buy a dozen or so things when I was first learning the process.  I mostly bought tins back then - they were cheap, easy to ship and back then postage was like SO darn cheap.  I think I was paying less than $2.00 to have a tin delivered.  I know that thanks to ebay, the post office gained millions of packages, so of course, the prices went up and up and are still going up and up.  But, I digress.  This is not to slam the Post Office (because living in the middle of the US has perks like cheaper postage to almost everyone) but to talk about ebay.

I have 1088 feedback.  100% positive. although I have had two negatives in the past.  Both of those two were unfounded - one said "Package took forever to come" when in fact, she paid me five days after the auction, I mailed the next day and she received it in two days.  So, eight days after the auction ended she had her items - five of those days were because she hadn't paid.  The second negative was from an auction for an Add-A-Count Scale (you put numbers on either side and the scale shows which amount is more.  You get two of each number 1, 2, 3, 4, 5, 6 and one each of numbers 7, 8 and 9).  I got a negative for not sending two each of the 7, 8 and 9 - which are not even part of the product plus I said in the description that you were only getting one each of those numbers and that is how the manufacturer sold it PLUS...she was a MATH teacher and should have KNOWN that coming in.  Why, yes.  I am still bitter about both of those.  Now you can call ebay and have them removed, but not back then.

Anyway, I have 1088 feedback, but I have sold way more things than that - people are bad about not giving feedback.  I always give feedback, but I try to wait until I receive feedback from them to make sure they didn't have an issue or they aren't just cray-cray.  :)

In the past 17 years I have sold a total of $16,184.77.  That's not bad money for buying things at yard sales around my area and listing them. Sure, it's not a full time job, but sixteen grand is kind of a nice number to have made selling junk.

I have had some fantastic fun auctions in my day - there is a list of my best and highest sellers over there in the right side bar.  Every one of the things that I have sold for big amounts was purchased not more than ten miles from my house.  Most of them are from the tiny town over where I like to go to yard sales.

My best all time sale both for the amount of money it sold for in the end as well as for being the oddest item I have listed was the Blythe Doll.  Oh, I know you remember the Blythe Doll.  But, let's revisit it just for fun. 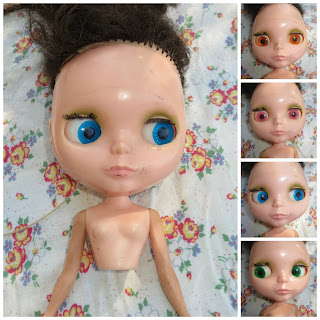 Blythe Dolls - the original ones from the 1970's - are highly sought after.  When I found this one at a yard sale for $3.00 I almost passed.  Can you imagine?  But I really thought $3.00 for half of a doll was kind of high.  But, then again, why did they even price half a doll.  It seems like they would have tossed it, right?  Also, I didn't want to spend $3.00 on something that was junk.  But, I decided that I would buy it and try it.  Maybe someone would want it just until they found a good one.  It should be noted that she did not have a waist or legs and her hair was a giant rats nest. She was a mess.  But she also had redeeming qualities - like the fact that she existed, she was original and she had this magical pull string on her back that, when pulled, her eyes changed colors and positions in her head.  I showed her to Lara the day I bought her and when I pulled the string for the first time we were both all "Ooooooooo" and "Ahhhhhhhh" when we saw those eyes change color.

I put her photo on Instagram and I had a comment from a guy, "I'll buy her."  I kindly let him know that she was on ebay.  Well, he bid and he won her for the princely sum of $515.00.  I about fell out of my chair in the last few seconds of that auction as the phone dinged and dinged and the price just kept going up and up.  Exciting!  I tell you, the thrill of a good ebay sale is hard to beat.    Especially when YOU went out and found the item, YOU cleaned it up, YOU researched it, YOU photographed it, YOU listed it and then someone "gets" it and wants it.  BAD.

eBay has changed over the years, and I am no expert.  I still list things like I always have - I try to talk to the potential bidders like I think I talk to you guys.  I'm not all business like with rules and bossy talk - I just talk about the item and thank them for their time.  Lots of clear photos with a ruler by each item, good descriptions, really point out any problems or imperfections so that when they get it they are happy at how nice it really is and be friendly in the listing.

I belong to a thrifting board on Facebook.  They have these over zealous ideas about customer service and taking almost anything back in returns and refunding shipping for damaged items and lots of other things that aren't my style.  I treat my customers good, I follow the rules and I pack to a trip to the moon and back.  So, if it gets damaged that's the post office's fault - not mine - and the post office will pay for it with the insurance.  So, why would the seller refund for that?  Also, I do not accept returns unless I have misrepresented the item.  For instance if I said it was from the 1950's and it had a Made in China Dollar store sticker on it - that would be misrepresentation.  But, since I research the bejeezus out my items, I am not prone to misrepresentation.  (That's not to say that I can't be wrong  - if I was  - I would refund.  Honest Injun.)

Another thing the thrifting board recommends is putting super high prices on your items and letting them relist and relist until the sell - marking them down a bit each listing.  I feel that if an item is wanted and has value, the buyers will find that item and bid it to what it's worth.  Would I have EVER put a high price on half a doll.  Uh, no.  Would I have EVER guessed that people would bid her up to $515?  Uh, hell no.  If an items doesn't sell after three listings, it's gone.  I have two booths - so there is always somewhere to take it and still make money.  Plus who wants to sit on the same merchandise for a year or more?  Not me.

I currently have thirty auctions going, but only bids on two things.  Maybe it will pick up soon with tax season upon us.  Most of the bids come in at the very last minute after seven long days of just sitting anyway.  Maybe they will sell.  Maybe not.  Who knows!

As usual, this is a rambling post and it has just gone on and on.  Three gold stars if you hung in this long.  Thanks!  Sometimes my thinker thinks thunks and I have to write them down.  :D  So, do you buy or sell or both on ebay?  I am far from any sort of an expert - these are just my thoughts.  What are yours?

***Thanks for all the kind words about returning Paw-Paw's quilt.  I was happy that I found the owner and was able to reunite him with the quilt. 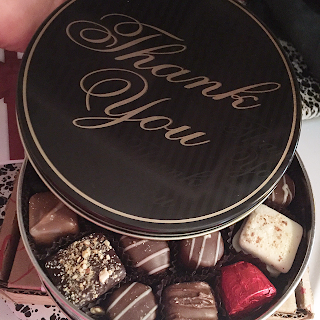 This showed up in the mail a few days later.  Very nice indeed.
Posted by Shara at 11:31 PM