The Week in Junk: Oh Deer, Is That A Doll?

As you know, the junk finds are few and far between this time of year.  I have to be happy if I find one good thing in three or four stops at the thrifts.  There have been a few random yard sales and I went to an Estate Sale is a giant gorgeous home (three times!), but I still have found very little.  I am starting to squirrel away the new finds to take to the Junk Ranch in June.  All the inventory I have left from the last Junk Ranch will head to my booth this week.  I had all my Christmas in there November and December, then I took out some less than amazing stuff I had on hand and put the whole booth up for 50% off (I pulled some things that I wasn't willing to let go that cheap though).  In the end, I had a really good month even with the half off prices - no one would have bought all that they did at full price anyway. So, I'm cleaning house, making money and making some happy customers, it's a win-win.  I have five huge tubs full to take out this week plus some miscellaneous stuff I have set aside for that booth too.  I'll take it off half price and hold my breath.  The weather is better and the people are out looking - so that's good.  I kind of lost my love affair with that booth for awhile, but getting rid of so much stuff and putting in so much new - I'm feeling the love once again.  Now, if I can just keep it going!

Our shared booth (mine and Lara's) is doing well.  We can usually walk in and see that certain things have sold and then there are always holes where other things are gone and then there are surprises like little ephemera things.  I heard some other Vendors talking the other day about how they have "only paid rent a few times".  Meaning that they didn't sell enough that month to cover their rent and commission.  I have never, ever, ever in the fifteen years I have had booths had to "pay" rent out of my pocket.  It comes out of my check always.  I have had a couple skin of my teeth carryover months - less than $20.00 over rent and commission.  But never in the hole.  I could see it happening once or maybe twice when you are learning the way the booth and the store works.  But why would you keep doing it on and on an on?  I knew one vendor that had a booth three years and only got a small check twice.  WHY, OH WHY would you just give your stuff away like that?

Back to what you came for - THE JUNK. 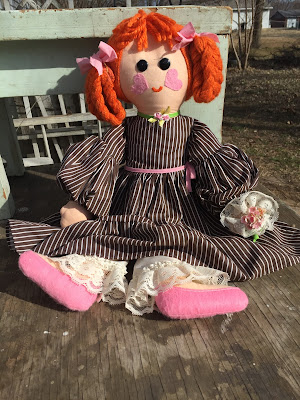 This 1985 doll is super sweet.  I found her at the fancy house Estate Sale and I over paid for her but I was desperate to find something. I really didn't pay an arm and a leg, but I am cheap.  Never forget my cheapness.  :)  She's on ebay. I never buy pillows because I have a fear of bedbugs.  But since this was in a million dollar house, I decided that it should be bedbug free.  Rich folks don't have the cooties, do they?  It's absolutely pristine, so I think it was made more recently than the 77-78 date on it.  But then again, rich people have clean houses.  So, who knows.  Not me.  I'm not rich. 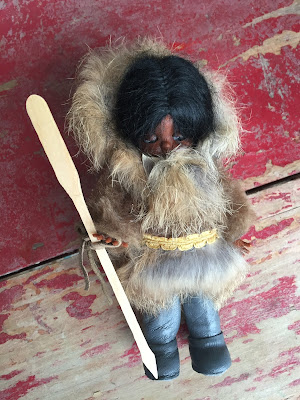 This came from the same house - It's a celluloid Eskimo doll plus it's a rattle.  It different than the usual souvenir dolls I see on my thrifting runs. 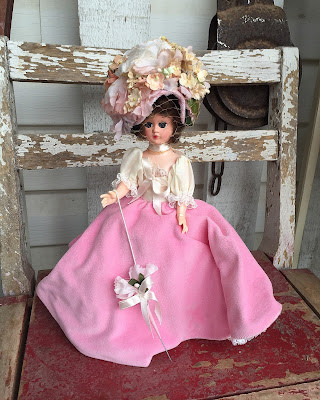 Same sale - this vintage storybook doll stood out from all the rest with that GIANT hat and all those millinery flowers.  She will go to the Junk Ranch.  The rich people sale had only a few dolls, but I zoned right in on them.  So don't be thinking I went to one of those sales with all.the.dolls.

I stopped at a yard sale on a very windy Thursday.  I mean gale force winds that were knocking limbs out of trees.  The sale was in the backyard and there were at least ten long tables covered in glassware including some candlesticks that were three feet tall.  The wind would come over the fence and everyone's hair would blow and the leaves would fall and.....not one thing fell over.  It was crazy.

They had a ton of stuff, but it was all marked with flea market tags that were now half price.  Well, even half of a flea market price is too much for me.  I did dig around and come up with these old flatback cookie cutters. They had been mounted on wood plaques and I thought that the person had drilled holes in them to do so.  I was sad about that, but decided to buy them and see if I could salvage them.  When I popped them off the plaques I realized that the nails were through the holds that were in the cutters already.  So, they weren't ruined at all. 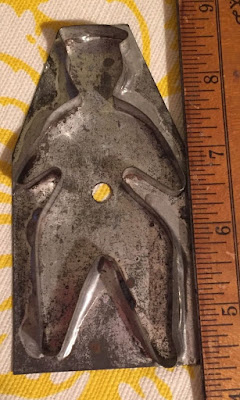 I bought ten of the cutters in different handmade shapes. 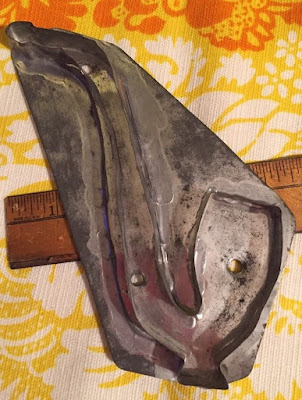 This is an Uilleann Irish Pipe Cutter.  It must have been made for St. Patrick's Day. 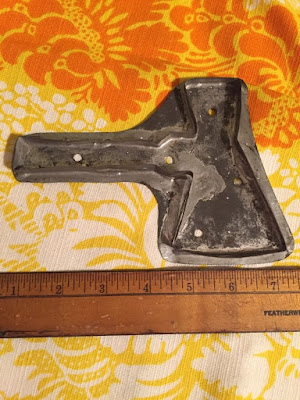 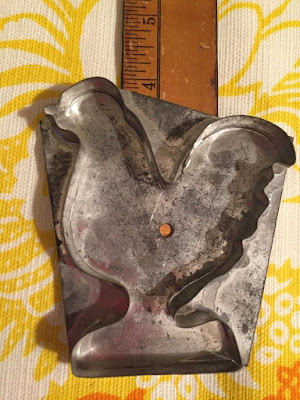 There was a rooster, a bird, a swan and a goose. 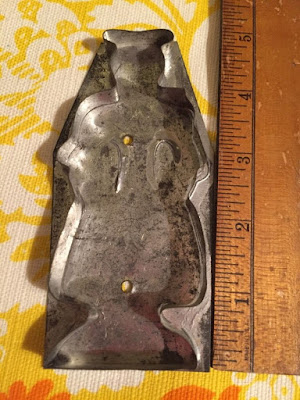 A Dutch girl, Dutch boy, a lion, a rocking horse and a pig.  I thought the rocking horse would be the least likely to sell - but it was the first.  I think of Rocking Horse motif as 1990's. 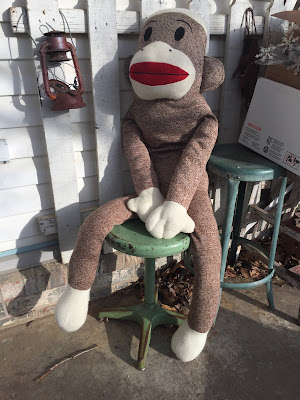 The Bean found another giant sock monkey.  I have taught that kid well!  The last one sold for $58.00.  He's on ebay now too. 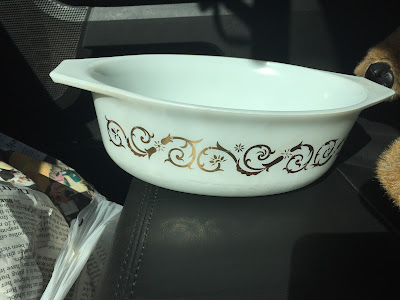 Gah.  I hate Pyrex.  I'm sorry to you Pyrex collectors  - I do admire your collections and I think they are gorgeous.  But, it's just not me.  But, if I find a cheap piece, I have to buy it and throw it in the booth.  It's a law. 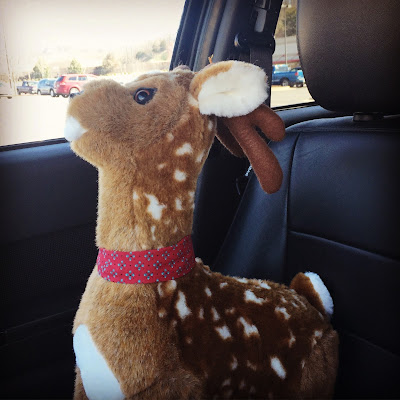 A quick Goodwill stop netted me this great Santa's Best reindeer.  He's about 2.5' tall and he's animated!  Plug him in and his head moves slowly.  He seems to sell well on ebay, so I will hold him until Fall and list him.  He's quite cuddly and adorable. 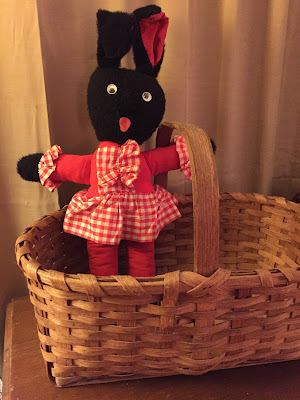 Vintage bunny for 25¢ from the Super Cheap Thrift in a basket from an auction I went to yesterday. Oh, the auction was chockablock with goodies.  But, there was a guy there (who I shall call 264 since that was his number and I heard it, oh a thousand times) who bought everything.  I kid you not - he bought it ALL.  Money seemed to be no issue.  I heard his total was over $10,000 and he was still going.  I managed to get this bsket full of old red and green handled kitchen tools for $15.00.  That was IT! 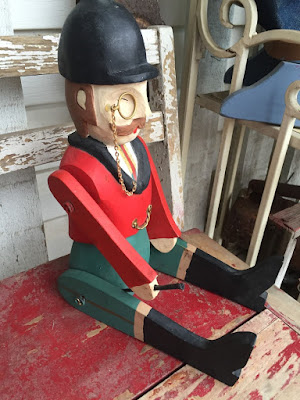 This Foxhunter came from a yard sale and sol;d on ebay to someone in England. 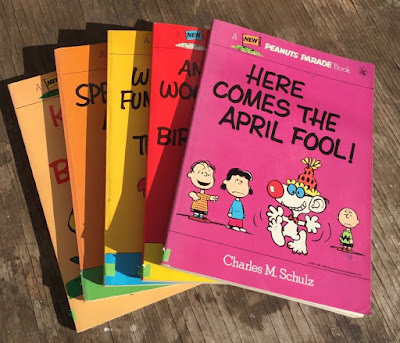 Peanuts books from the rich house.  Sold on ebay. 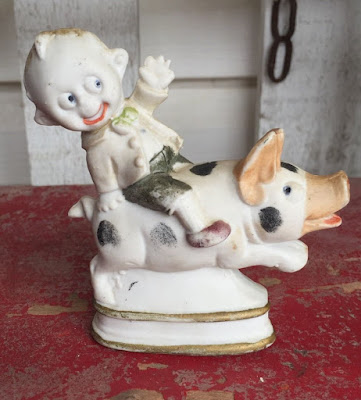 And a German bisque pig with some sort of a political history, but I haven't cracked it yet.