This morning we said good bye to our cat, Tiger.  He came to us with that name ten years ago.  Such an un-clever name for a big yellow cat.  But since he weighed almost 20 pounds, it seemed fitting. Plus, he was eleven years old, so that name was his.  We called him Mr. Big Boy, Yellow and Tiger Boy among other things.  The people that lived next door moved and said they weren't taking him with them.  I had a sneaking suspicion that they would dump him somewhere, so I brought him in our house one night before they moved.  They never even asked if we had seen him. 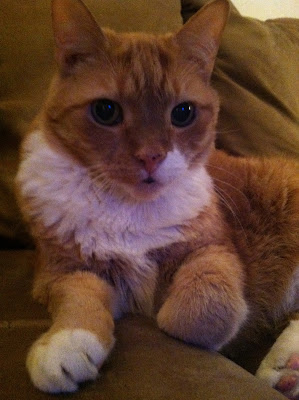 He was The Bean's best friend growing up.  He still was his boy.  Always his companion on the couch and in bed at night. He begged from his plate at meal times.  The Bean is taking this hard - he was only nine when he came into our lives. 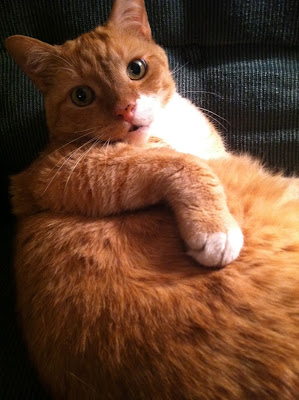 Tiger, you were the best.  We laughed when you would RUN out of the litter box, trying to escape your own stink as fast as possible.  You would come running down the hall and then 1, 2, 3, the smell would blast us.  We laughed and thought it was funny.  Pets and babies making a stink is funny.  I don't know why.  You would take a bath and contort yourself into the funniest positions and then just stop and look at us like, "Whut?" 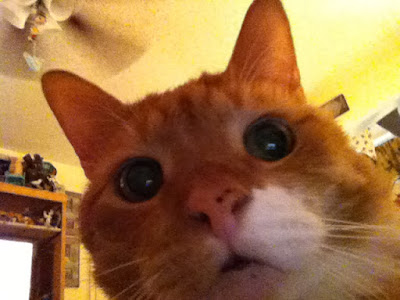 You loved your food.  Even as you dwindled in weight over the years and especially in these last few days.  Yesterday you ate the better part of a can of tuna, some cheese and some turkey along with your meals.  The garage door opening after I took out the trash was your cue to come into the kitchen and demand a treat out of the jar.  And, you always got it.  (I found this photo on my phone one day - he has stepped on the button and took a selfie.) 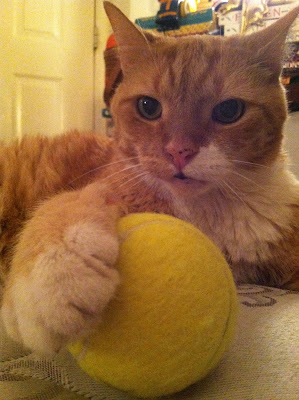 I can't believe you are gone, Mr. Big Boy.  You have just always been.  And now you are not.  Today was hard.  I had a hard hard day making hard decisions for you.  But, this one very hard day pales in comparison to all the joy and laughter you brought us these years.

Always in our hearts - we love you,Yellow.