The Week in Junk: Freestyling

About an hour ago, I started feeling like I could hurl at any minute.  There must be a bug going around.  Wheeee.  Merry Christmas to me.  Let's see if I can get through this....

These are my finds from the weekend at that one yard sale and at my Super Cheap Thrift.   That's where I also got the doll house.  Let's see it one more time. 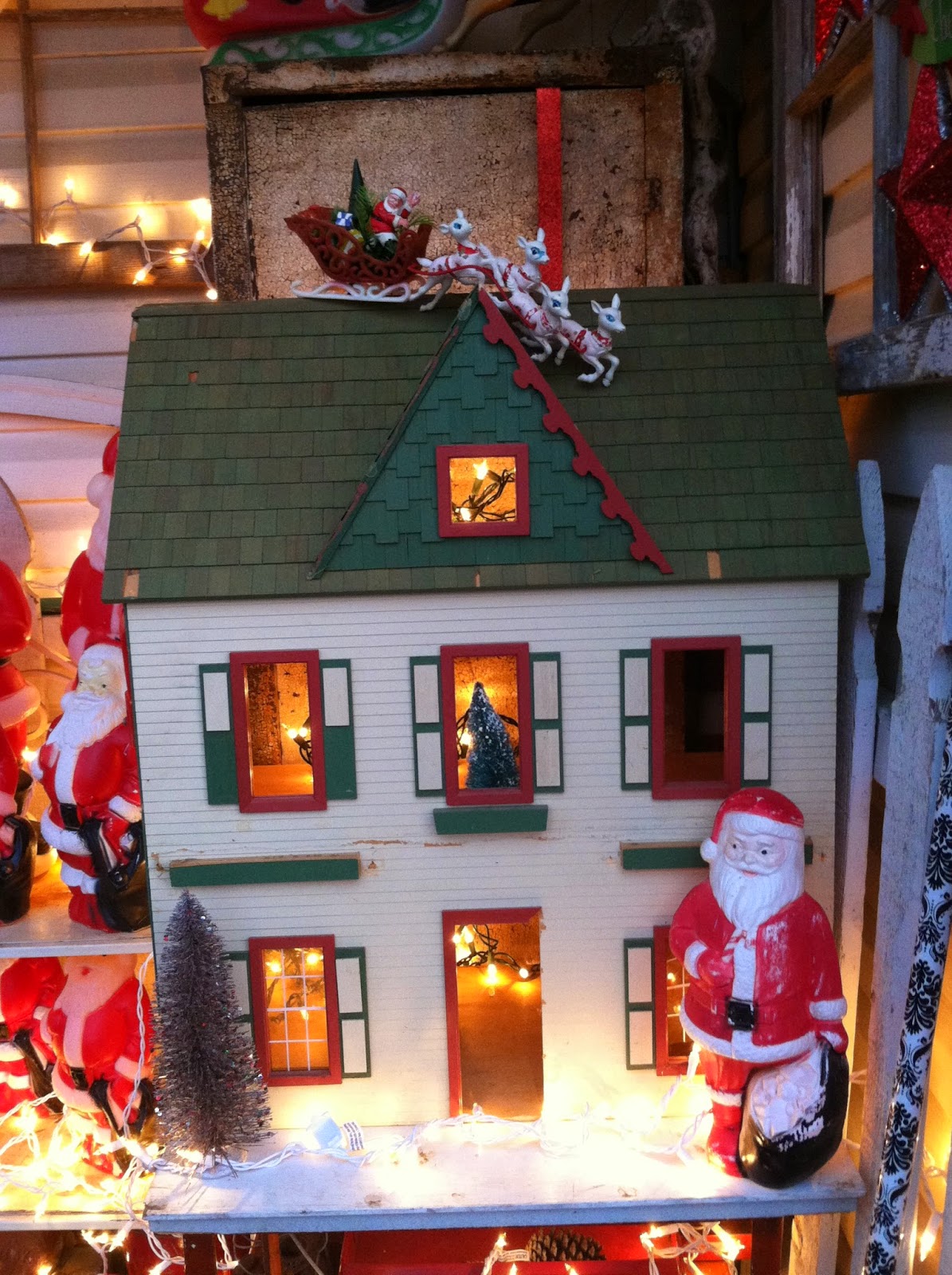 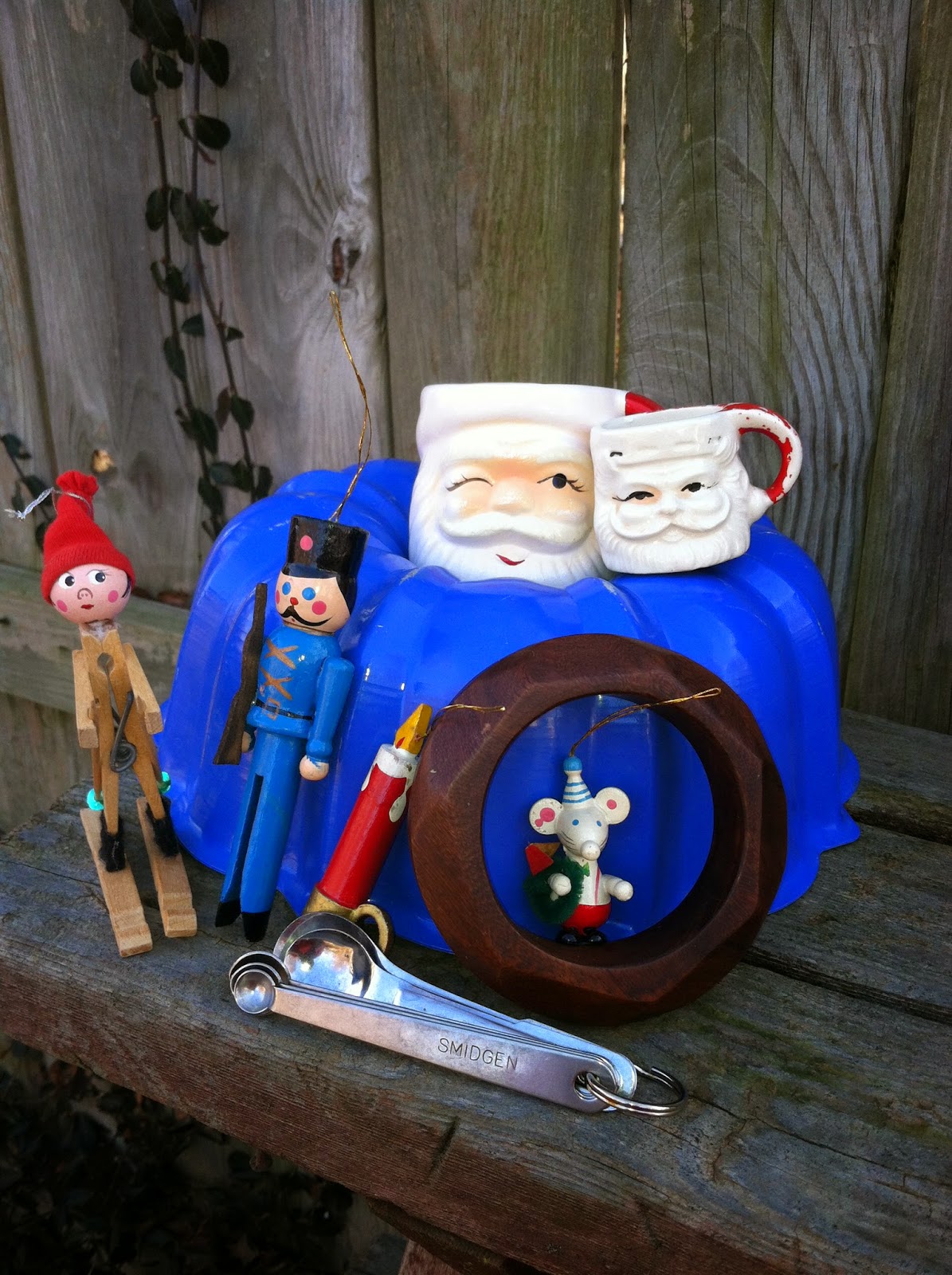 At the sale where everything was FREE:  I grabbed a box full of Christmas ornaments just because of the Santa mug on top.  I also found the slightly scary mni mug in there as well as the wooden ornaments.  The chunky wooden bangle is kind of fun and those measuring spoons?  I just saw a set of those in a catalog for $19.99!  They are for a "dash, pinch and smidgen".  Adorbs.  That blue Bundt pan made me decide to start collecting colorful Bundt pans BECAUSE I NEED ANOTHER COLLECTION.  *cough*  I do not need another collection, but I found that PINK one not long ago so now I see they come in all colors and I think they would look interesting along the soffit in the kitchen.  So, SEE?  I DO need them! 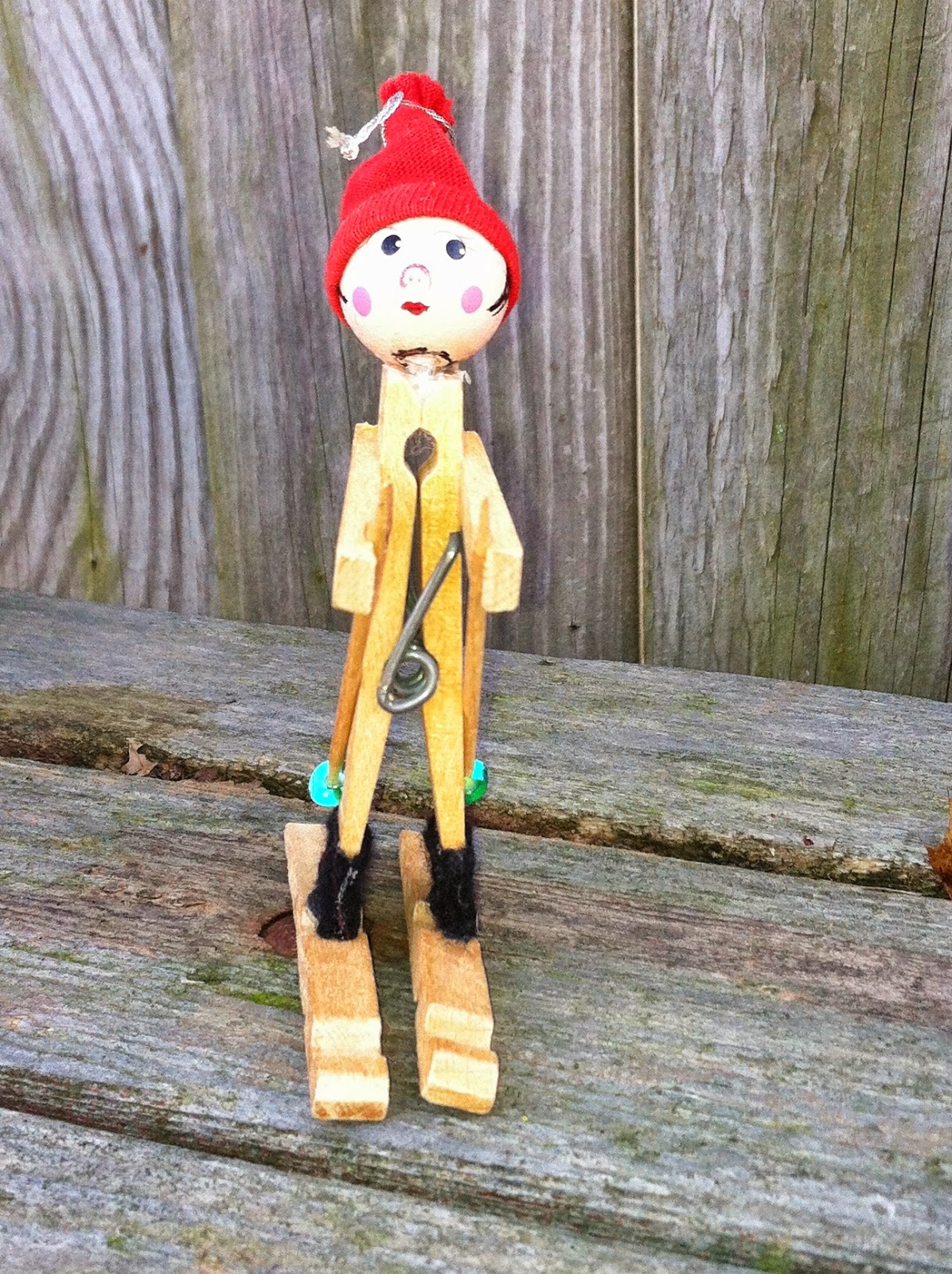 This little clothespin dude was deemed a keeper.  I usually see figures made out of the old school peg clothespins.  He's pretty darned cute.

This hand carved wooden spoon is just lovely.  I cannot imagine actually using it for anything though.  It reminds me of a Black Forrest Cuckoo clock, so I need to do a bit of research on it. 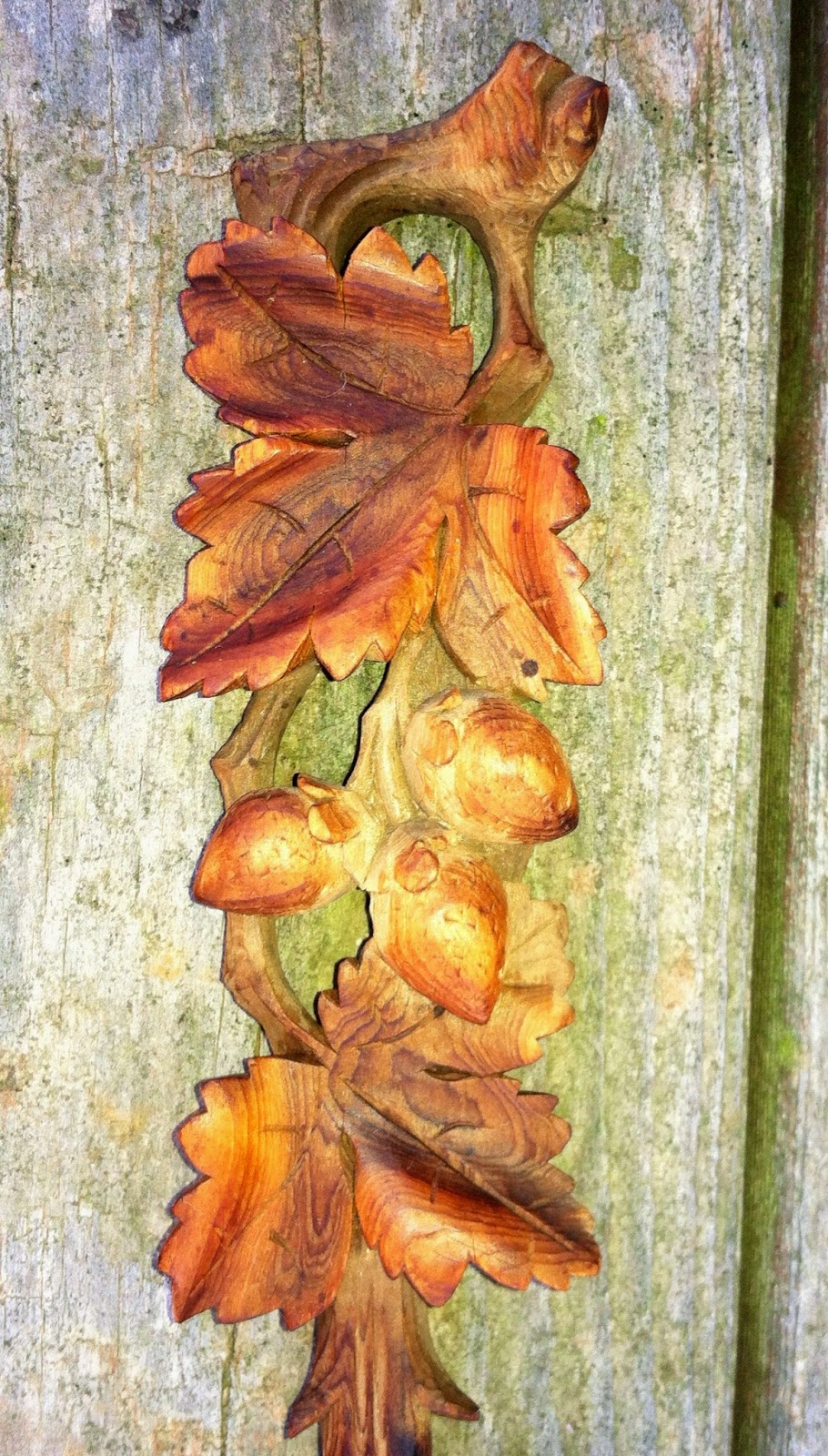 See the acorns and leaves?  Isn't it kind of fabulous? 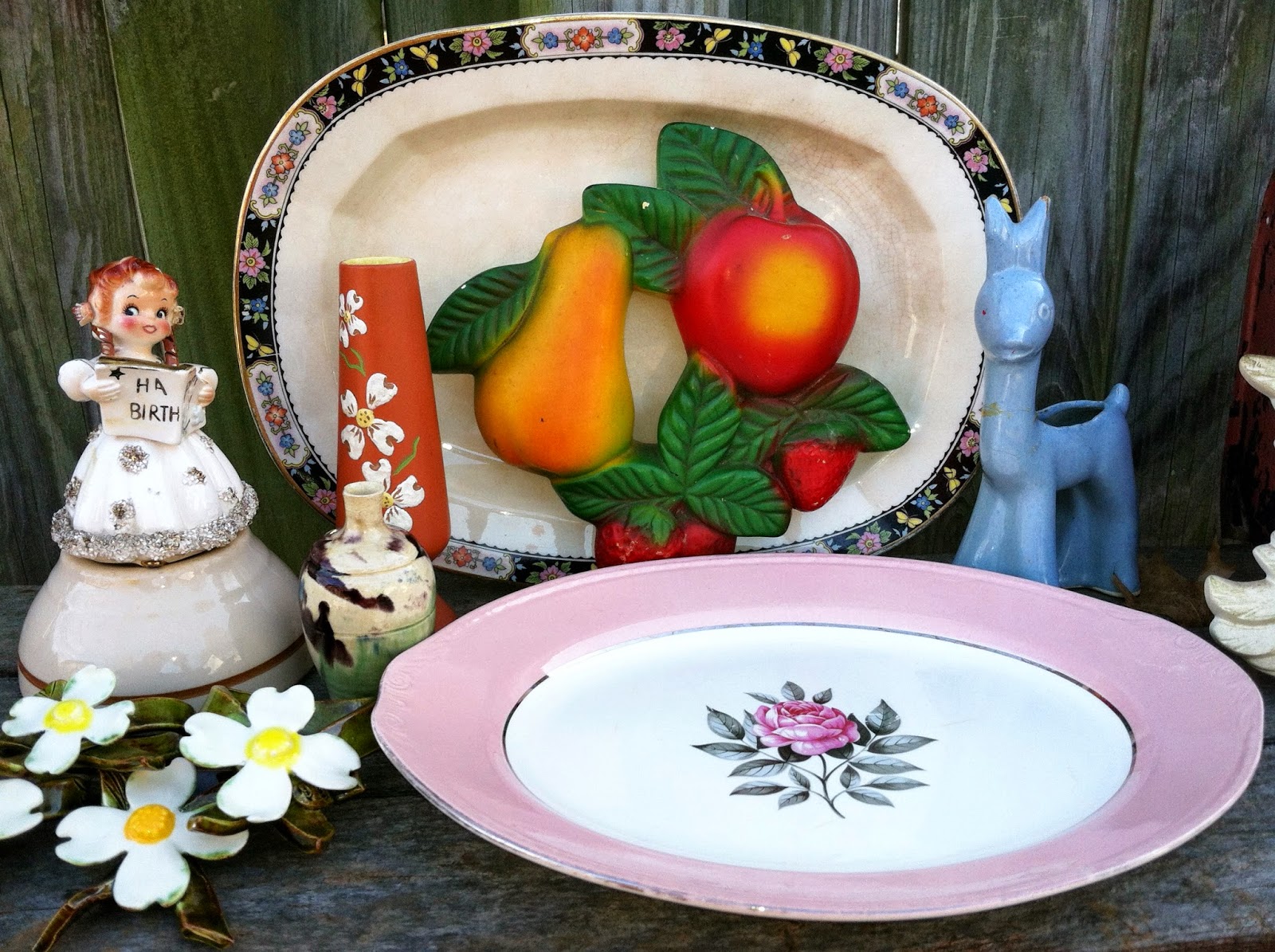 More free stuff:  Two nice lovely heavy old platters.  A dogwood vase and dogwood napkin rings, a small vase, tiny restaurantware bowl, fruit chalkware and a awesome blue deer pottery planter.  That I dropped and smashed into a hundred pieces as soon as I took this photo.  Wah.  It *was* adorable. 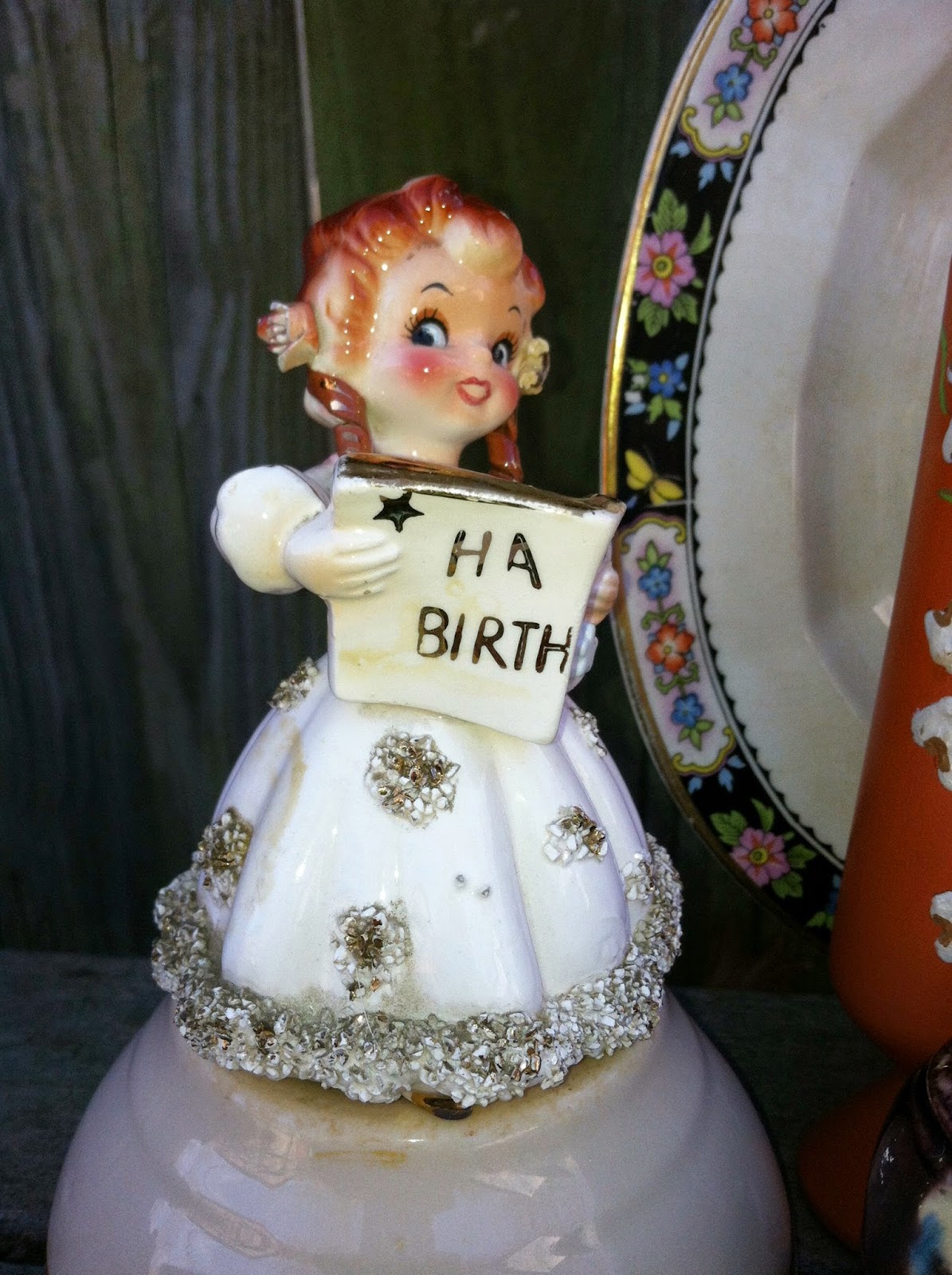 This little Happy Birthday girl has a flaw on the other side of her book, but I think I can fix it somehow.  Isn't she just the cutest, though? 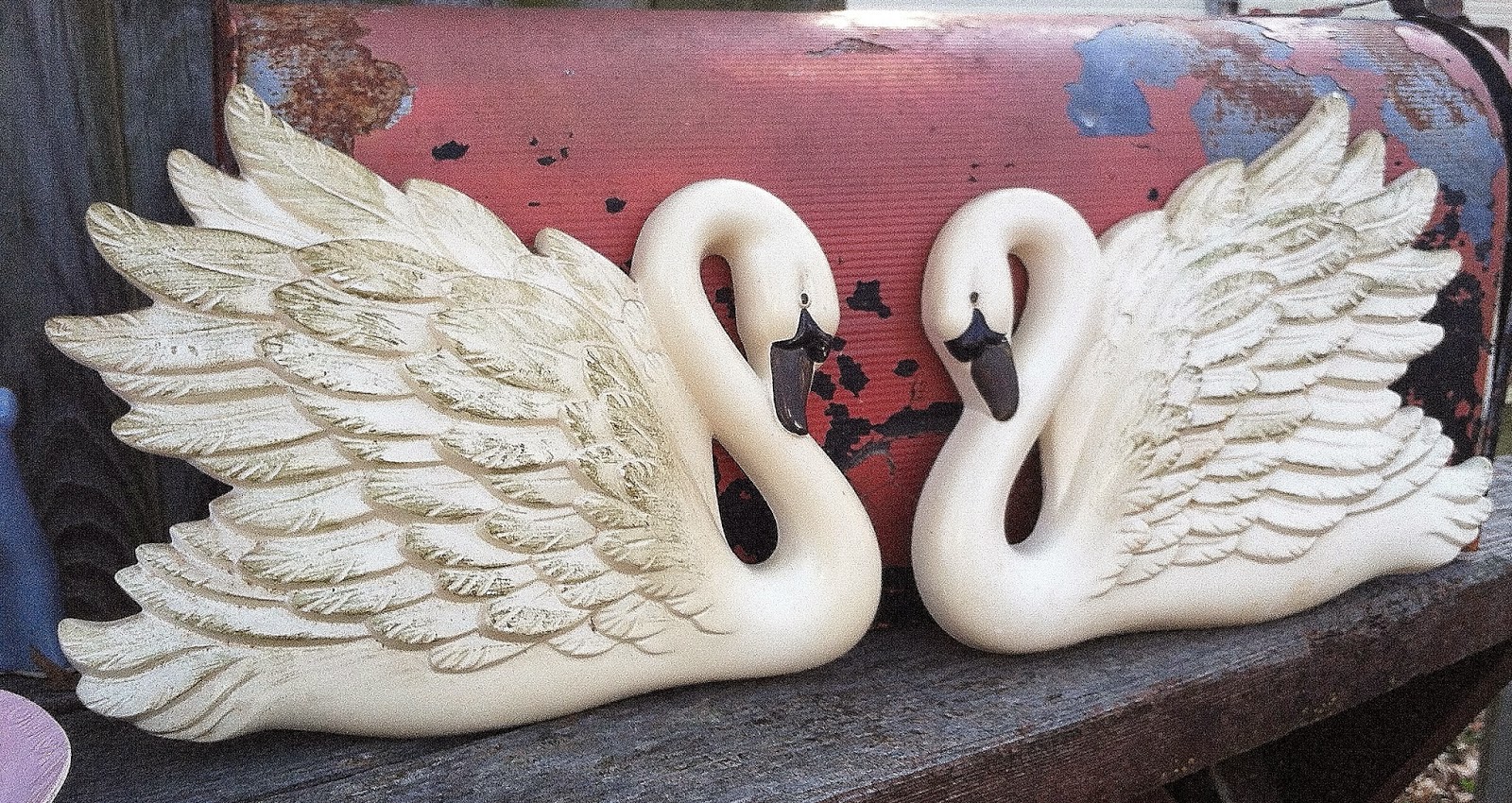 Two big chalkware swans.  I hate these things.  I see them a lot and I NEVER buy them.  But, free is free and I BET they will sell in the booth.  They remind me of my husband's Mother which is just a bad memory within itself, plus I don't get the whole swan/goose thing.  (Except your cool sweet swan things, Laurie).

On to the super cheap thrift where I got that dollhouse.

Had you going there. 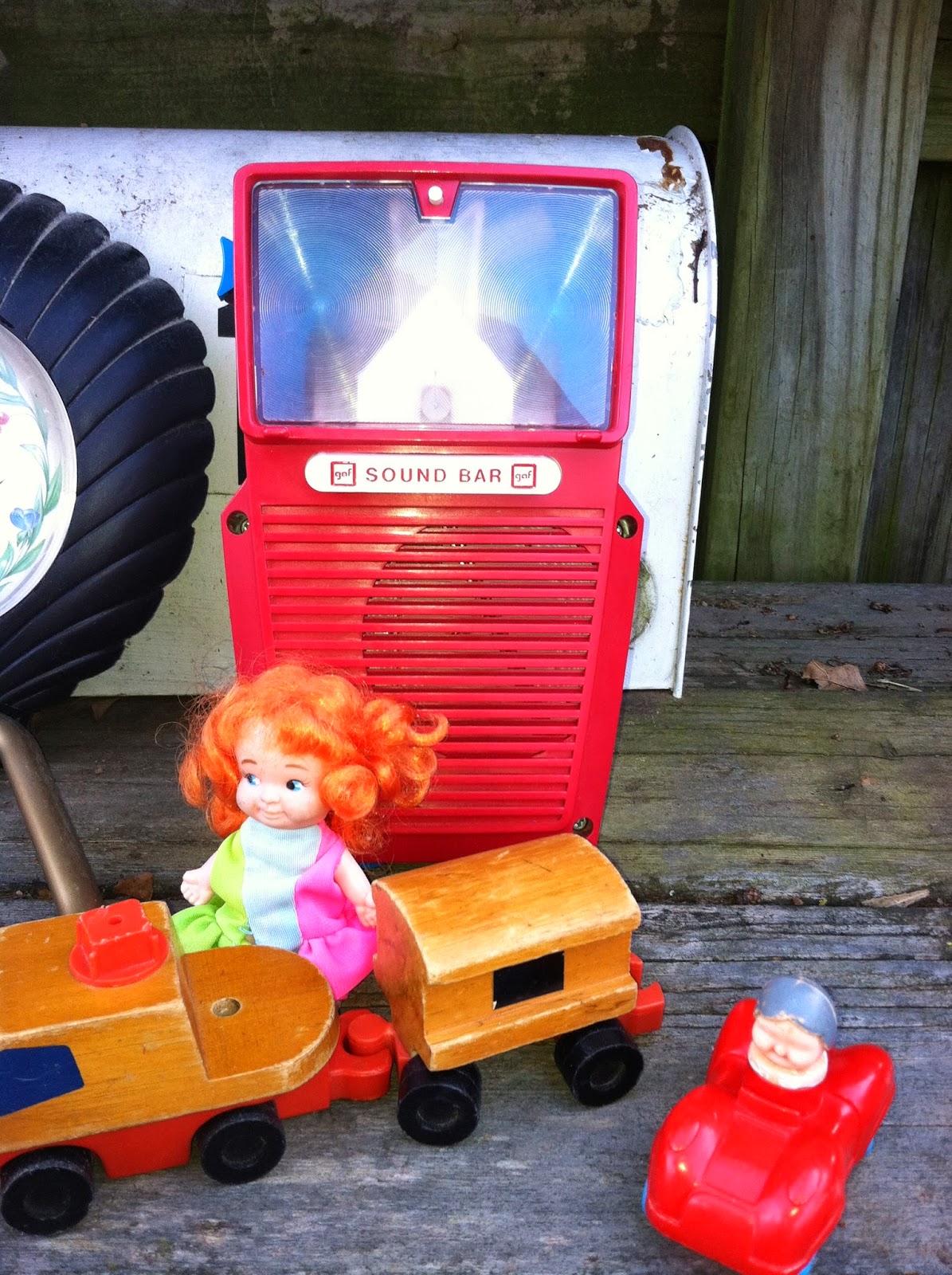 Wooden train, silly 1980's doll, a talking View Master (which is new to me) and a funny little old lady in a red car.  Not sure what her story is - but she's comical to me. 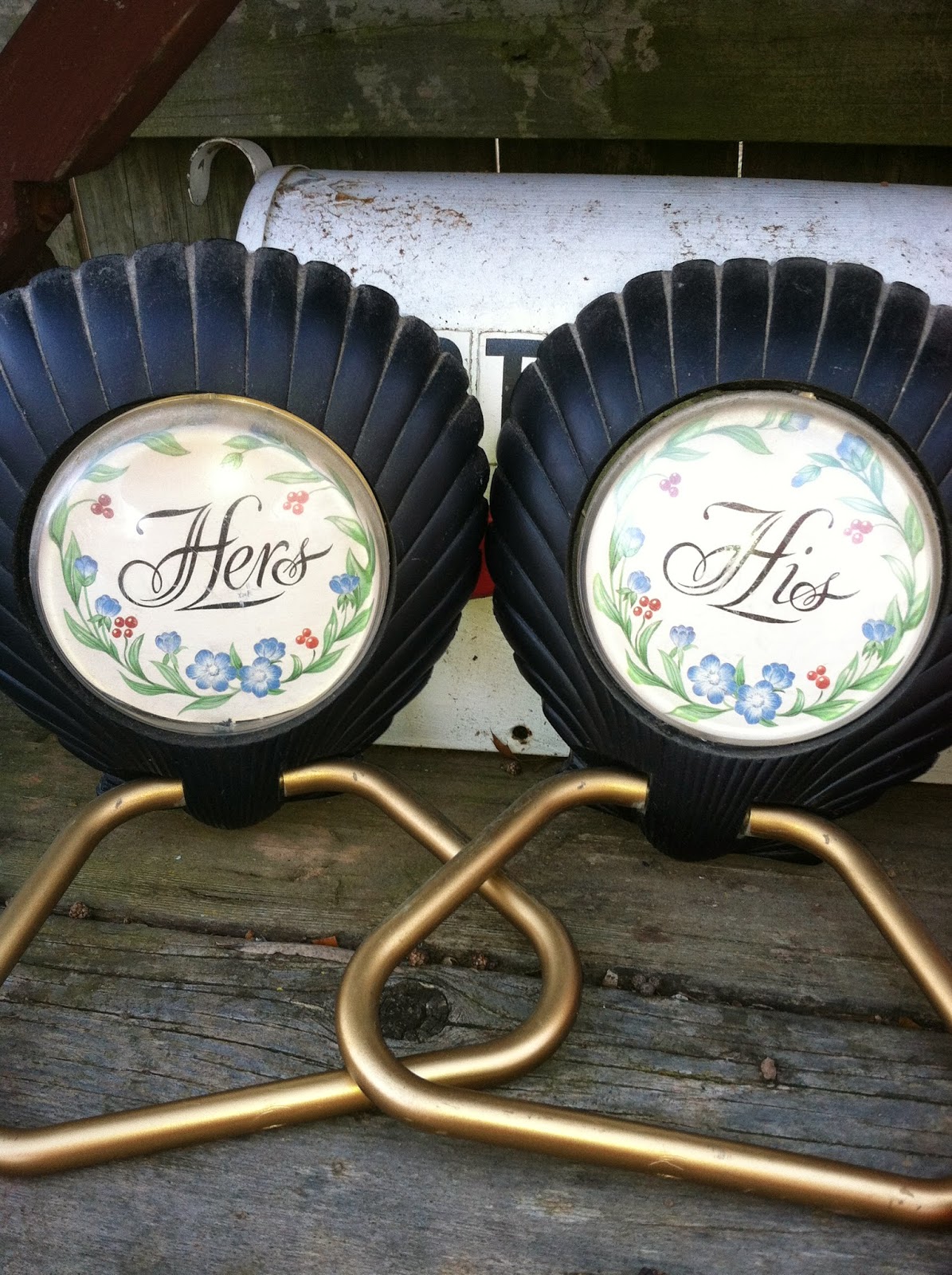 These seashell "HIS and "HERS" towel hangers are very very ugly and quite HUGE.  But, the price was right, so to the booth they will GO. 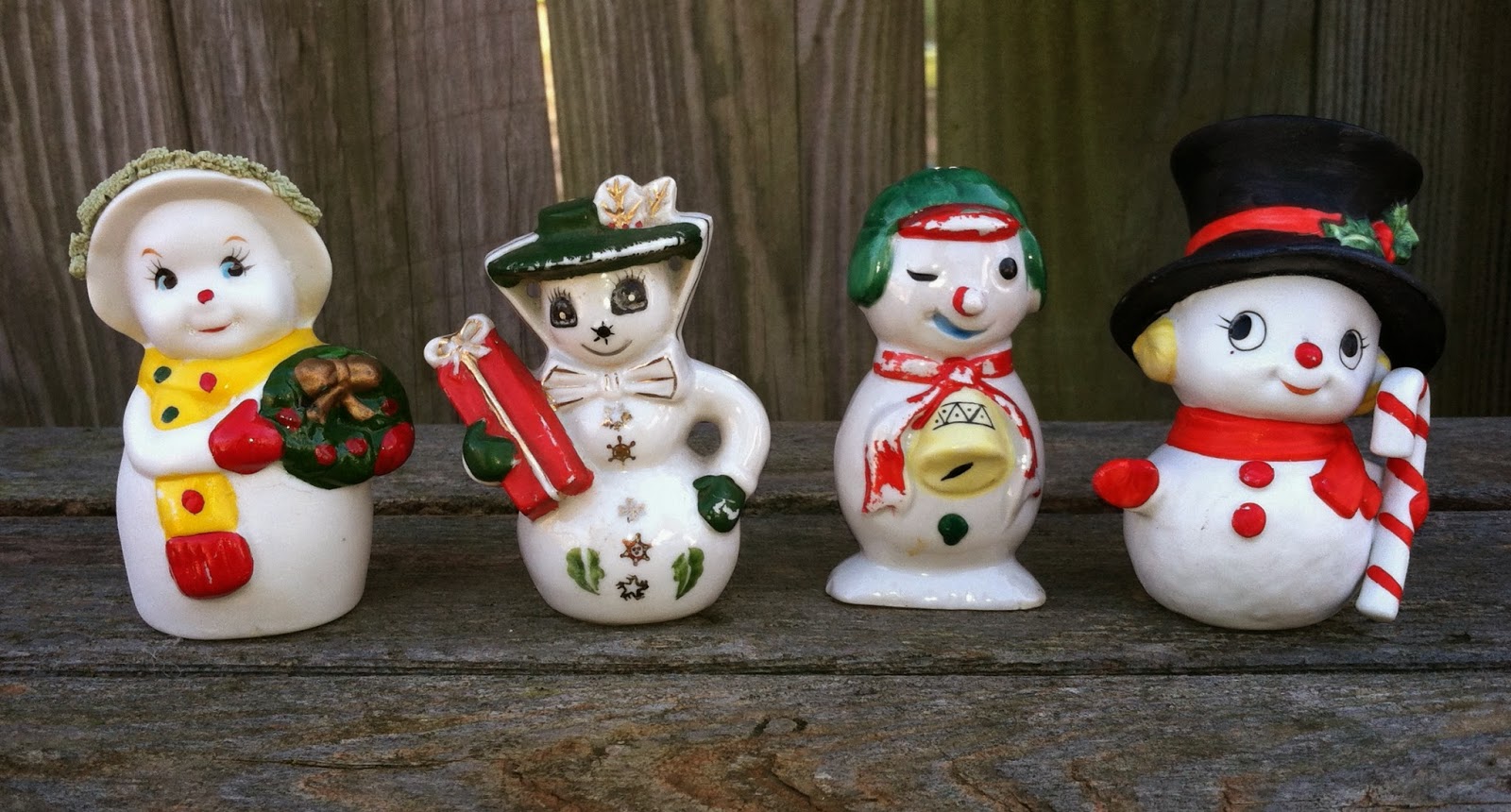 A quartet of vintage snowmen, a couple of which I *think* have been in the eggnog. (I'm talking to you two middle guys...)  The middle two are keepers, the first one will most likely stay for this season and the last one will be packed until next year to be sold. 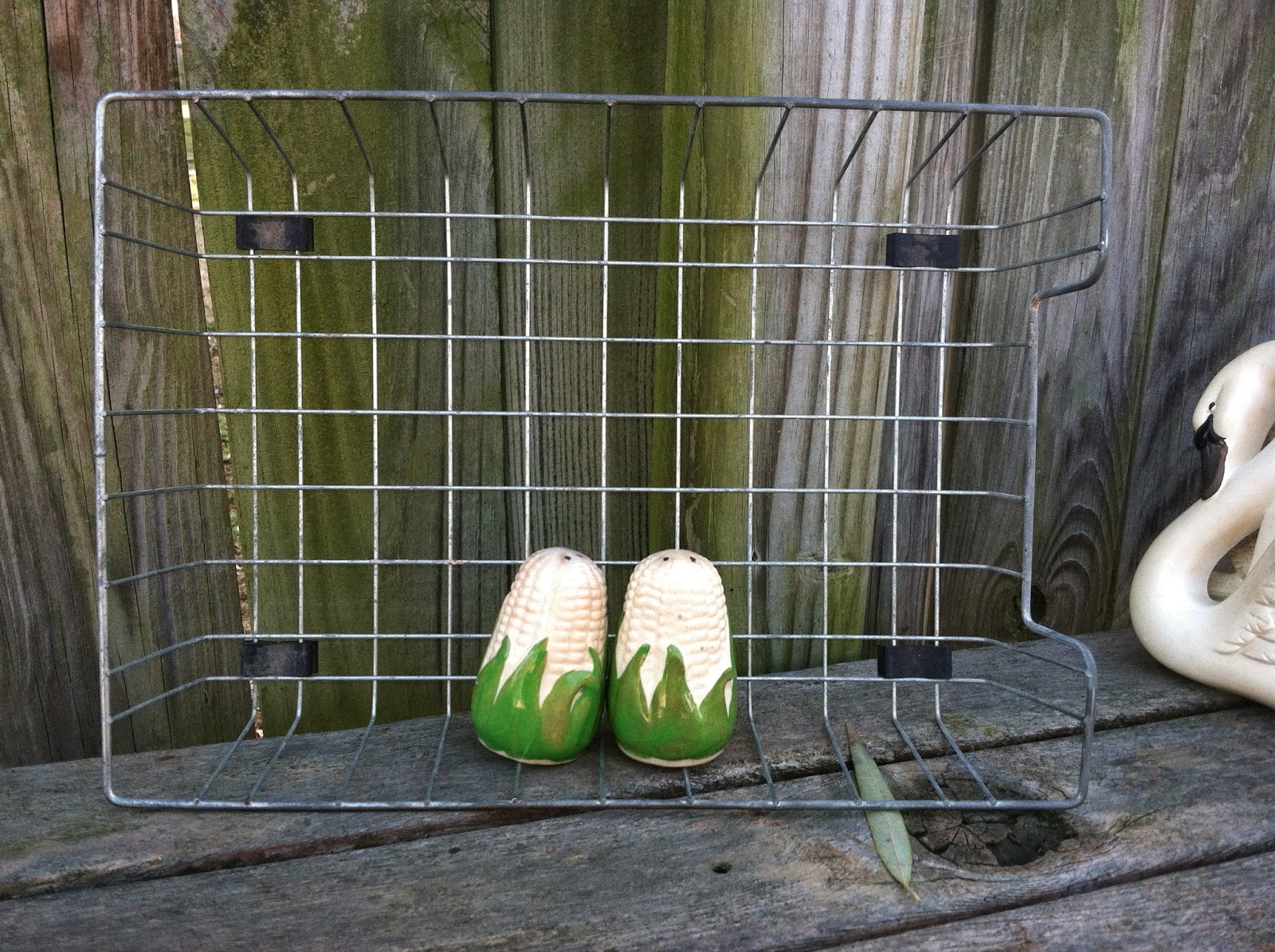 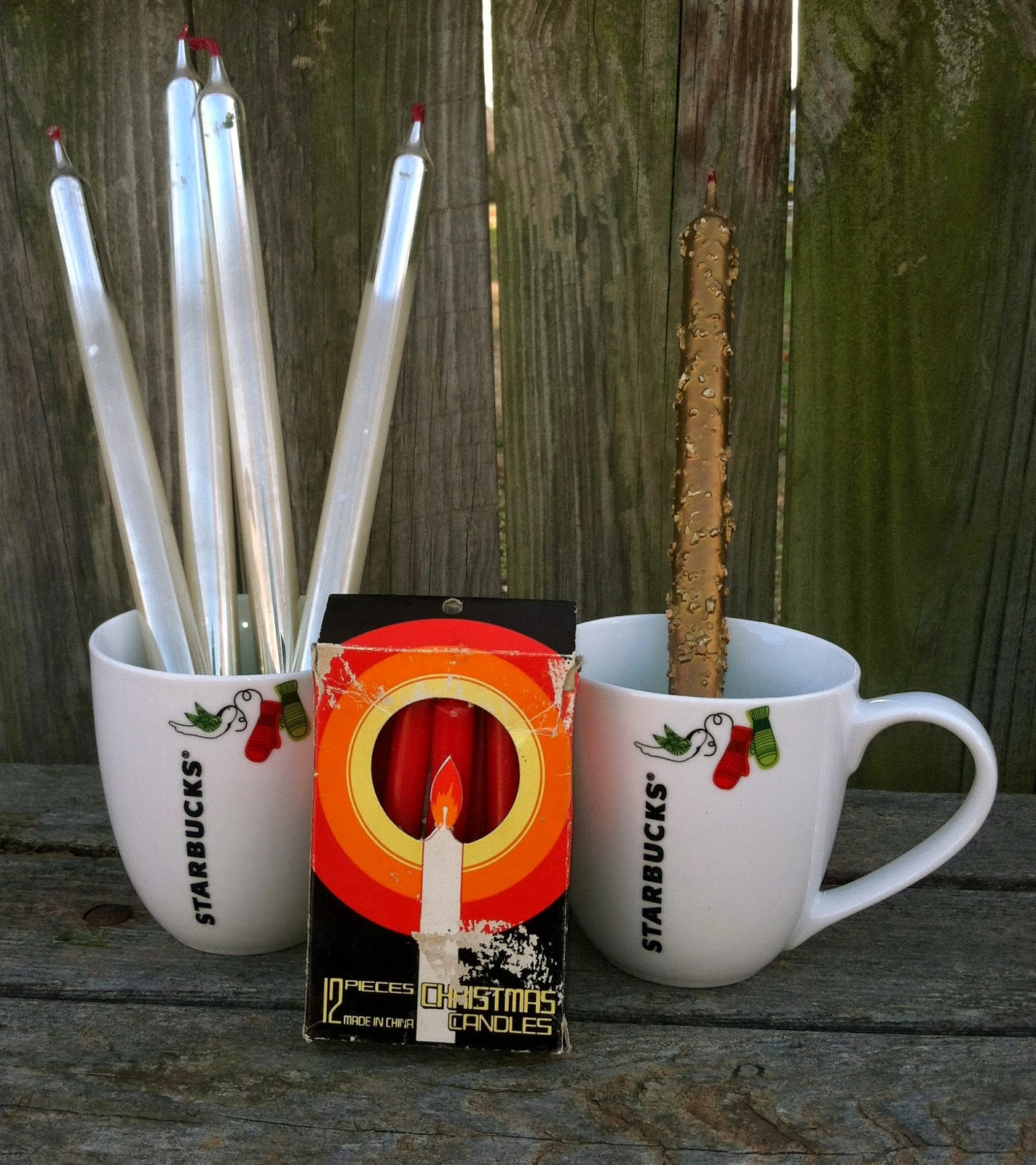 A vintage box of candles, two Starbucks mugs ( I sell Starbucks very quickly.  They go against my "I sell only vintage things" rule, but heck money is money!)  I was very excited to find the four Mercury Glass tapers and the lone gold glass taper.  The funny thing is, I already have four of them and I have never used them. But, every year I pull them out and adore them, then I pack them right back up. But, SOMEDAY, I will think of a genius way to use them.  Most likely in my MANSION.  Yes, that's it. My MANSION.

Ok, I just had to throw in in here ONE MORE TIME.

Well, I think I might go throw up now.