Long time readers might remember when I scored my KitchenAid Mixer from an on-line Black Friday sale through Lowe's for $18.00 in 2010.  Yes, you read that right - EIGHTEEN DOLLARS. There was some sort of a Facebook promotion and you signed up and then deals went "live" every night at a certain time.  The first so many people to go to the Lowe's site, put the item in their cart and completed check out got that item at that price.  One night it was a Kitchen-Aid Mixer  - the first 100 people got it for 90% off - only $18.00!  I sat by the computer and waited and waited for the deal to go "live" and suddenly - there it was!  I went to the Lowe's website and choose to shop through my local store instead of through the main online site.  I think that was the magic touch because even though it took a very long time and a great many times of refreshing to get the order to go through, IT DID!  I had an email confirmation in my inbox that my credit card had been charged $18.00.  I still couldn't really believe it could be true, but the next morning, I had an email telling me that my order was ready to be picked up at the local Lowe's.

I didn't waste a minute getting there - it's only about one mile from my house.  When I got there, I said I was there to pick up an order of a Kitchen Aid Mixer.  The clerk looked at me and said, "Oh yes, I know about that one..." and went off to get it.  As she passed several employees, she pointed back at me and said, "SHE's the one that got the Kitchen-Aid!"  Anyway, long story short, if it's possible after all THAT ^..... :), They had called corporate to verify the price and they were told that it was a legitimate deal.  All of the employees kind of gathered around and were really happy for me. It was a fun experience.  All for a mixer.

So, my family is known for naming their cars, their appliances, the things that they love  We drive Mr. Harris currently (any "The New Adventures of Old Christine" fans here?) and used to drive Stu the Vue and before that Stan the Van.  :)  When my new mixer came into my life, I knew it needed a name.  I toyed with "Martha" for either Martha Stewart or Martha White (baking mixes) and then I toyed with "Betty" for an Aunt of mine or Betty White (the mixer is white).  Martha and Betty were okay names, but none of them really FIT.  This mixer is strong, it works hard, it's beautiful and it makes my life easier.  Hmmmm.........a name would come to me one day.

And, last week on Christmas Eve, a photo appeared on Instagram and I KNEW what the Kitchen-Aid Mixer's name would be, 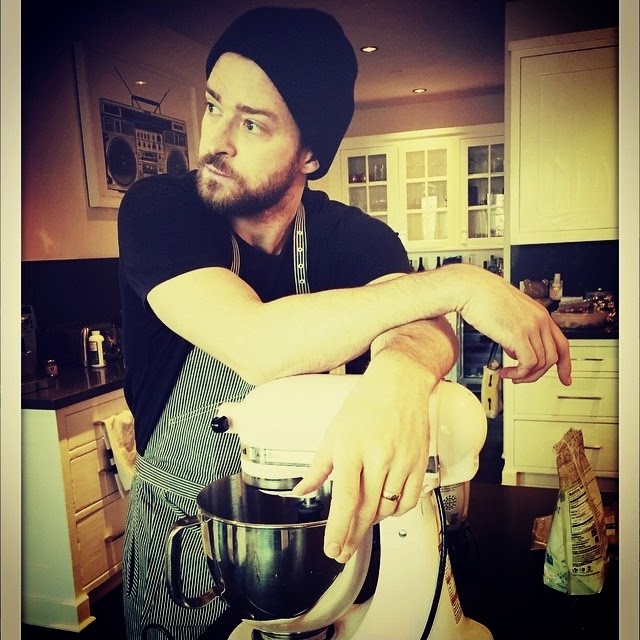 It makes me happy.

(That Justin could lose the stocking cap and beard though.....)
Posted by Shara at 1:30 PM