It Takes A Village

In the next big town over there was recently an ordinance put into place that promised that all people were to be treated equally and fairly.  ALL people.  Sounds like a great thing,  Right?  Kind of like putting a big WELCOME mat at the city limit sign  - "You are welcome here!"  Come on in!


But it got SO ugly.  People misunderstood it.  People put a negative spin on it.  Businesses refused to follow the ordinance.  People thought it meant SO many things that it did not.  I do not live in that town, but I shop there and spend most of my money and time there.  Plus, it is literally one mile from my front door.  It was brought to a re-vote and it the majority (52% to 48%) voted to repeal the ordinance.  So, the welcome mat is gone.  There is a bad taste in people's mouth.  It was supposed to be such a good thing.  It really was like a token anyway - shouldn't everyone be welcome everywhere anyway?  I think it will be rewritten and passed someday soon.  I hope so.

I was actually thinking of all the things going on in the world and that ordinance and how much hate and intolerance there is towards SO many people.  Democrats vs. Republicans, Gay vs. Straight, Religion vs. Atheist, Police vs. Men, Men vs. Police and so, so much more.  I have had to un-friend so many Facebook friends and family.  I don't want to hear their hate on any level.  I've been writing this blog for fifteen years.  Am I Republican or Democrat?  Catholic or Baptist?  Do I believe in God?  Do I tolerate homosexuality or do I abominate it?  I doubt anyone knows the answers to those questions because I don't air it here or on Facebook.  I do hope you know I am all about YOU being YOU - treating others as you would like to be treated and behaving like you want to be remembered. Just be good people, OKAY?  (For the record, I am not particularly political, religious or gay.  HA HA.  Had to throw a little humor in there.)

So, let's see how my Christmas village works into all this chatter. 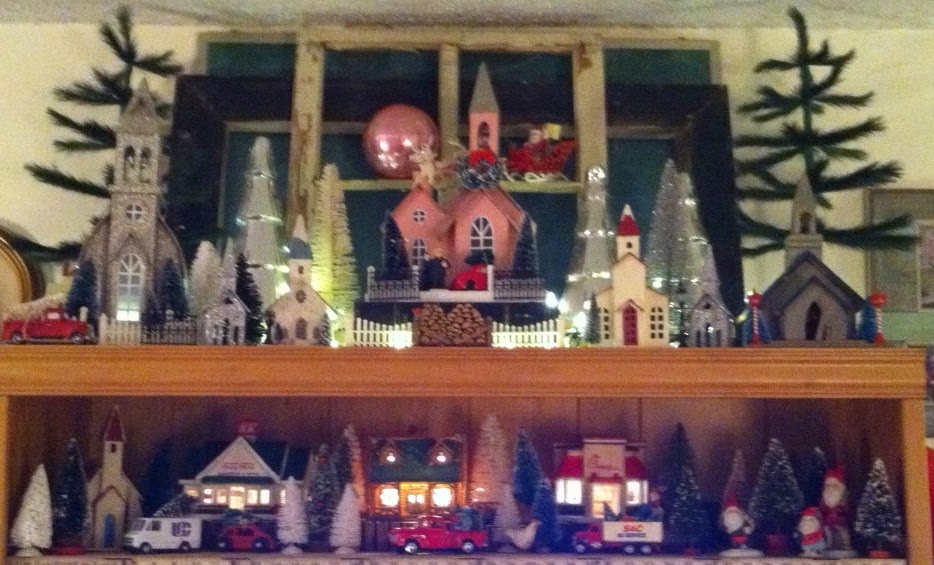 Churches of all sorts and all denominations coexisting. 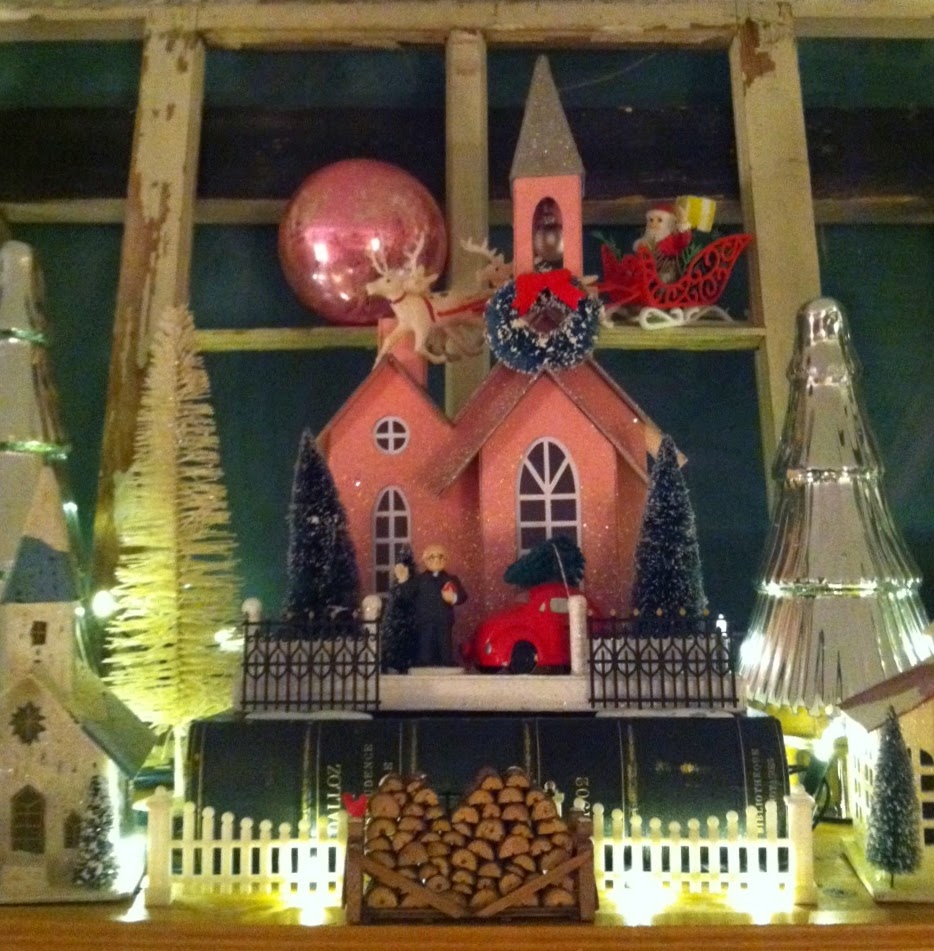 This big pink Church is one of my favorites.  I lusted (can you lust for a church?) over it at Target many years ago, but it was not needed or in the budget.  But, there was one waiting for me after Christmas at 75% off, so it was mine.  The day I found the little Preacher was a happy one for me.  I added in the giant old Shiny Brite as the moon this year.  Here comes Santa - he doesn't care about gay, straight, Democrat, republican or Baptist - he just wants you to be what?  That's right - just be GOOD. 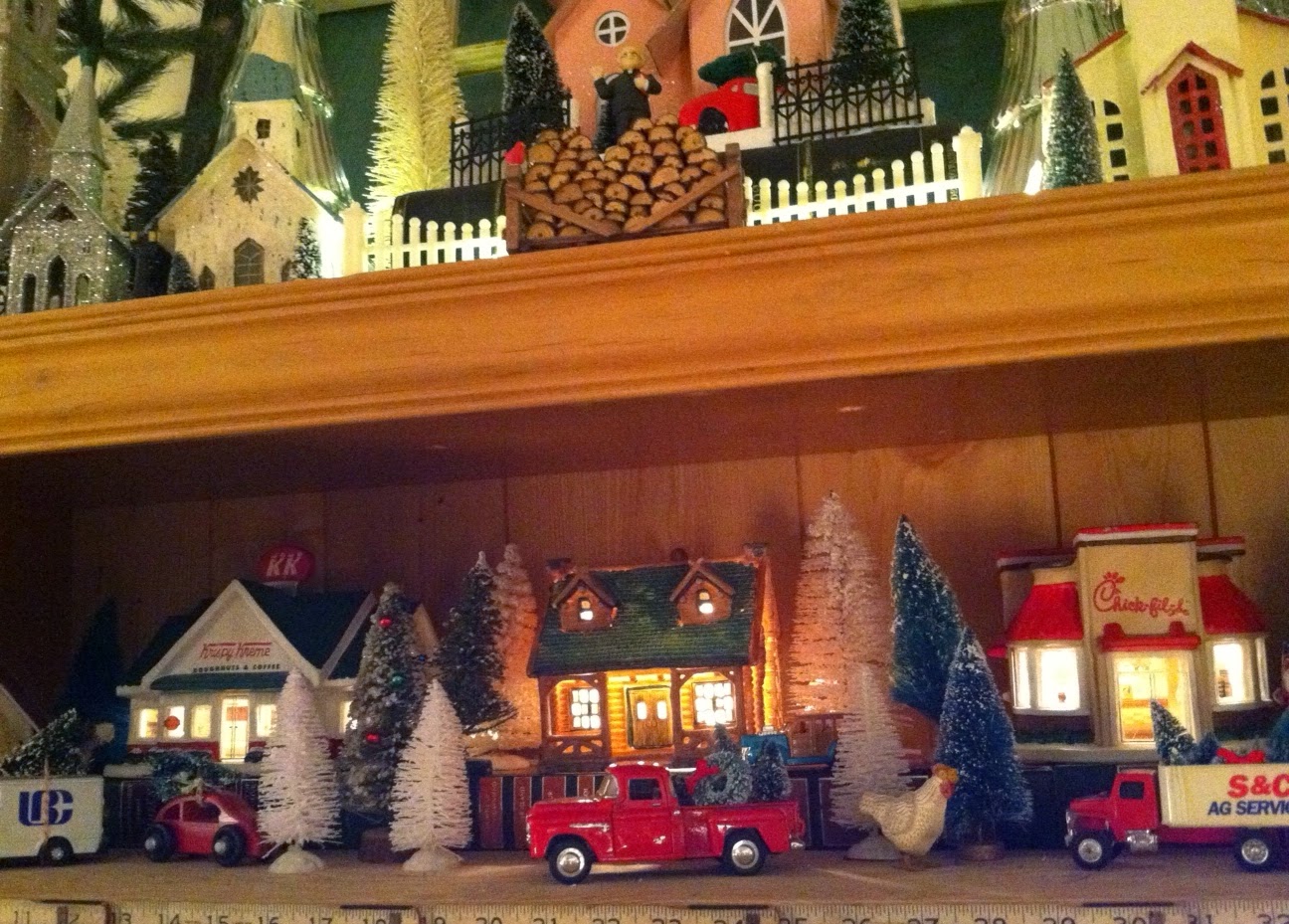 That little house in the middle is in the best location ever.  Right in between a Krispy Kreme and a ChickfilA.  And yes, that is a giant chicken headed towards ChickfilA.  (I know there were problems with ChickfilA and misunderstandings and hurtful words too.  But, this one is just pretend and there is no hate there.) 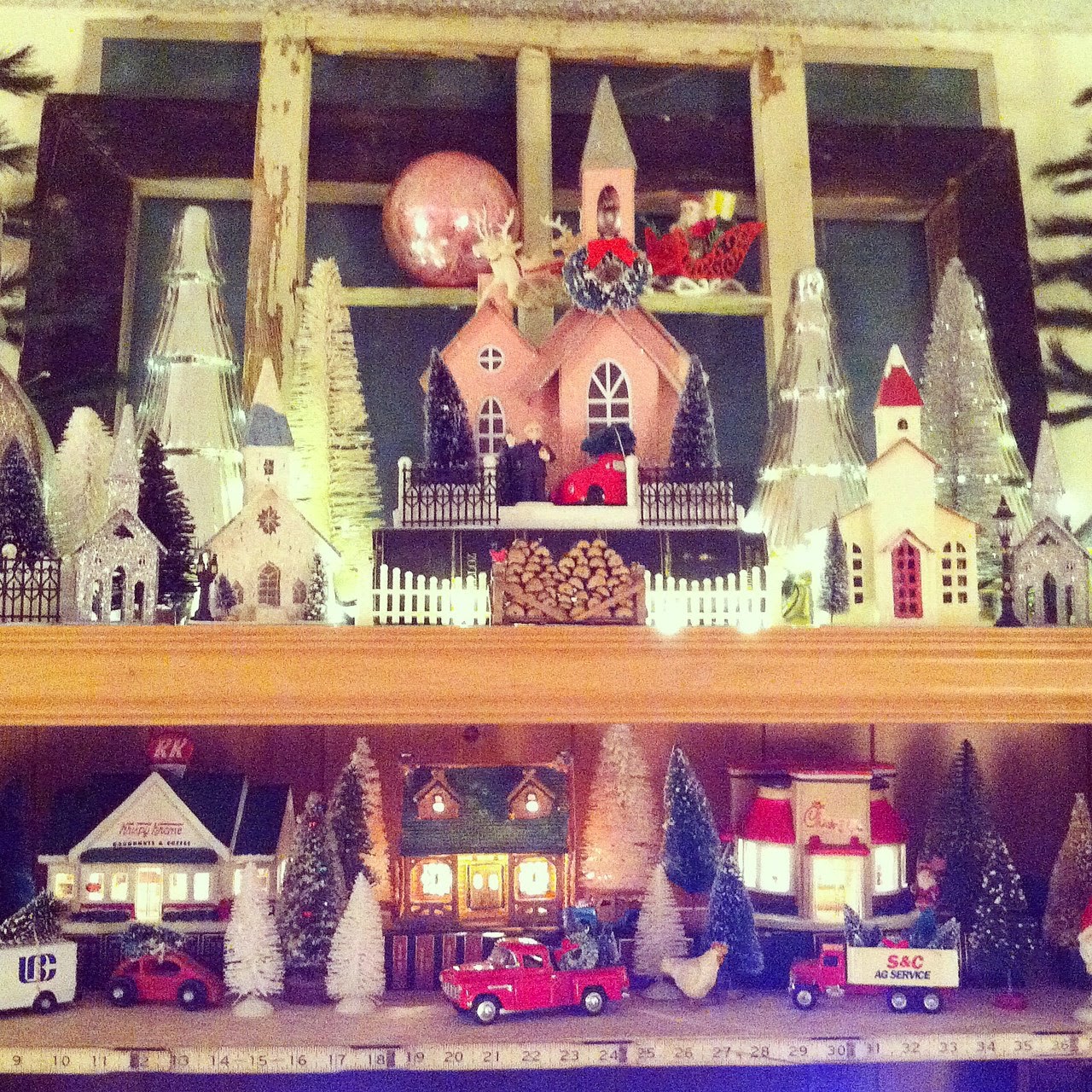 It's a happy place.  All are welcome here.  Come on in!

I know this post is all over in topics.  I don't get political or anything like that, but there is just so much HATE and stupidity in the world today.  Just play nice and be good.  OKAY?

**Lara was a huge supporter of the ordinance.  She used intelligence and politeness to convey her feelings and make her point.  :)
Posted by Shara at 11:46 PM