We have an AD?

Thursday I went to two sales where the people that were "having" the sale were completely clueless.  I am used to people still setting things up, or not having things priced. This I understand. But, at these two sales neither of them even acted like they realized they were having a sale or that people would ever actually come.

Sale #1: Advertised in weekly paper as opening Thursday (and running for eight straight days which is really weird, but I thought I better hit it the first day to see what they had) and having lots of items including collectible knives. There were signs up on each corner and at end of their driveway. I arrive at 1:00 in the afternoon, so I am not surprised that no one else is there. When I arrive, everyone looks at me like I just forced my way in with a gun. Great big eyes, staring at me as I begin to take in the mountains of boxes that lay before me.  "Are you OPEN?"  I ask.  I hear a "Yep" so I proceed to dig.  There is a trailer loaded with probably fifty boxes, most of which contain Avon bottles, which I (normally) avoid like the plague.

I took The Bean with me since he collects knives. I look around, but I see no knives. I say out loud, "They must have sold the knives." To which one of the guys jumps up and says "Where's them knives?" Then the old guy who appears to be the one actually having the sale mutters, "Who said we'd have knives?" I say, "It was in your Ad." He looks at me for a very long time then he says, "We had an AD?" They finally locate said box of knives which are new and junk and not what The Bean collects.  (How do you not know you have an AD in the newspaper?)

I proceed to dig in the mountain of filthy boxes on the trailer. Old guy informs me this pile is $2.00 a box or 25¢ for each item. I proceed to pull out individual items. He says, "No you have to buy the box" I remind him that he just told me items were 25¢ each. "Oh, ok", he says.  I like box lots a lot, but I didn't want to drag home even more filthy things than I actually wanted.  Sometimes box lots are fun and you find a little surprise in the box.  I think any surprises in these box lots most likely would have had eyes and teeth.

On the other side of the driveway there is an huge box of boxes full of dirty things.  I ask if those are for sale (or better yet, headed straight to the dump). He says it will be but not yet, since he hasn't sorted it out. Five minutes later, I see something in one of those boxes I want, so I ask if I can buy it. Yeah, he says - those boxes are $1.00 each or 25¢ an item. Sigh. He just told me that they weren't for sale now they are for sale and cheaper than the sorted out boxes.  So, I begin to dig.  Even though though things are dirty, it is surface dirt like it has been in an outbuilding for thirty years.  Not dirty like in a hoarders house with cockroaches and mice.  A little dirt never scares me if I think it will clean up okay.  My Magic Eraser and my spray bottle of bleach will clean about anything.

He follows me as I look at everything while the other three people continue to stare at me big eyed.  I continue to find an item in every box or so and the old man tries to get me to buy the entire box instead of just the one item.  He tells me what every item is and where he got it and I really just want to be let alone to dig and make a pile, but I stop looking because I am uncomfortable with the staring and following.
Finally it is time to pay.  I lay my items all out in a row, because I have a strong sense that Math just might not be the Old Man's forte.  I end up with three boxes - one $2.00 box and two $1.00 boxes, plus a pile of random items. I count out the random items.  There are fifteen items, so I assume that I will pay 15 x 25¢ for a total of $5.25, but he decides that the random items equal to a $1.00 box and charges me a total of $5.00 for everything.  I might have made a couple more boxes if I knew that was how it was going to go.  But, once I got it home and worked on cleaning things for three straight hours, I was happy that I didn't gather up any more.  Later that afternoon, it poured rain.  I hate sales that leave things out in the rain, but this might be one instance where leaving things in the rain might actually raise their value.


Here is only a little bit of what I bought.  (I have edited these photos over and over and the new ones refuse to load....WTH Blogger???)  So, sorry for the cheesy backdrop and any junk in the background.  It was pouring, so I had to be inside. 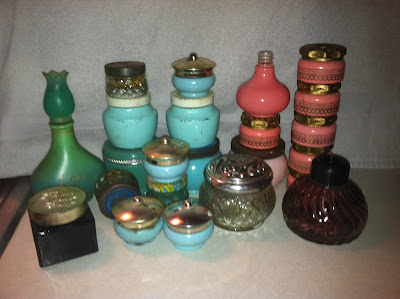 I don't like Avon as a general rule, but these little containers all had such pretty cut glass bottoms or pretty colors that I decided to buy them. 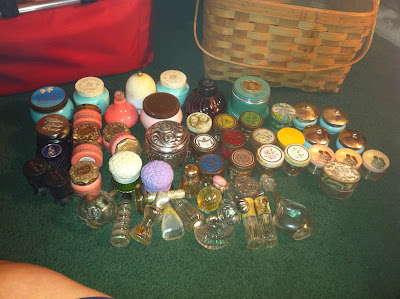 In the $2.00 box there were over 100 little containers.  I threw away a lot of them, but I did keep all of these.  I will probably make little baggies of them and put them in the booth.  I only have a couple cents in each one.  (I really tired to crop my darned leg out of this one!) 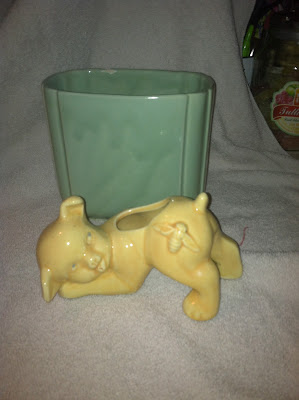 Two very sweet pieces of pottery - love the jadeite green one in the back.  It has a teeny chippy on the inside edge, but placed just so on the shelf and wah-lah, you can't see it.  I thought the little yellow one was a cat when I bought it, then I decided it was a puppy, but is really had a piggy nose, so who knows what it really is - I do like the bee on his bottom though. 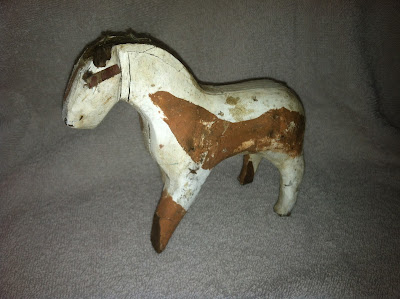 A very old hand carved horse.  He's seen better days, but if I wouldn't have rescued him, no one would have and he would have gone to the dump.  He's too old for that. 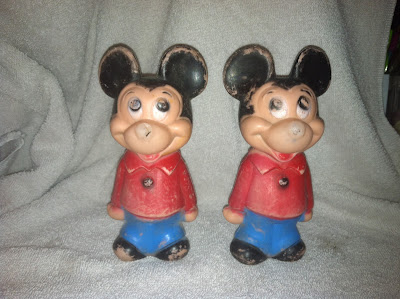 Two hard plastic Mickey Mouse toys.  I found one on either side of the driveway.  Reunited at last! 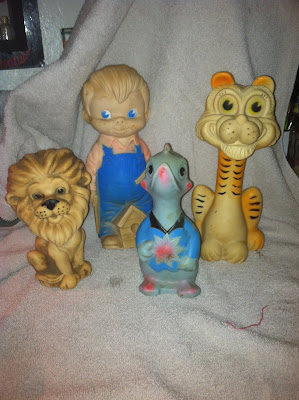 An assortment of old rubber squeaky toys salvaged from a box here and a box there. 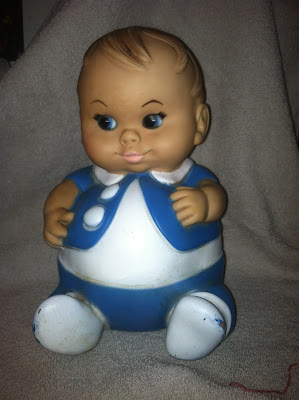 Rubber Plumpee Baby.  I cannot tell you the LOVE I have for this fat, fat baby.  The Bean helped me load it and carry it, but when he saw Plumpee sitting on the counter all washed he he asked, "Where did that come from?" He was filthy dirty, but I hoped he would clean up - and he did!  When The Breadman commented on him, I told him that finding him was worth all the trouble and filth I had encountered all day.  "He must be worth a LOT then," he said.  Oh, you foolish man.  Plumpee is not going anywhere.  He is staying here to give me a chuckle when I see him.  Such a funny fat boy.  ( I know I already posted about him, but he's worth a repeat)

Sale #2: Old lady and teenage girl with small yapping dog that will.not.shut.up. YAP YAP YAP. I spot box full of erotica paperbacks. Not my thing, but heck that Shades of Gray is all the rage, so maybe I can sell that smut too. I ask price of books - "Oh, I don't know if they are priced." Yes, that's why I am asking - they are not priced. She says gather them up and she will look through them and decide how much each one is. I pass not really wanting said old lady to rifle through the Erotic books deciding what they are worth.

I spot an old red COSCO stool off to the side and ask if it is for sale. She goes to look at it, says, "Oh, I don't reckon so since it has paint all over it" which makes me think it is either not for sale since they think it is painty or it is headed to the trash pit. Either way, I leave empty handed with that damn dog still YAP YAP YAPPING at me.