Seventeen years ago, I embarked on a journey.  A journey of being a Mom.  I was admitted to the hospital on August 31st, yet The Bean did not arrive until September 6th.  Every day, I was given medication to induce labor.  And, each day went by with no baby.  At 7:00 each night, they would send me home for the night to be back at 7:00 am  the next day.  Each day I had no food or water until they let me go home.  In the elevator, I squeezed two quarters in between my fingers waiting for the elevator to reach the 3rd floor where the VENDING MACHINE are was.  There I would buy a bag of Mustard Pretzels and devour them on the spot.  Still the most delicious things I ever remember eating.  I was there on Thursday and had no baby.  Back on Friday, still no baby.  They sent me home for the Labor day Weekend (quite a weird thing - trying to go into labor on Labor day) complete with the IV still in my arm.  Tuesday I was back in the hospital on meds, but again, no baby.  Wednesday morning as I arrive, I announce that if the baby doesn't come TODAY, I am going home until he makes an arrival on his own will.  With that statement, they forcibly break my water.  The Doctor's way of saying, "Nanner Nanner Boo Boo", I think.

Hours go by with nothing.  I don't like talking about dilation, because "Eew".  But one minute I was barely and the next minute it was GO TIME. 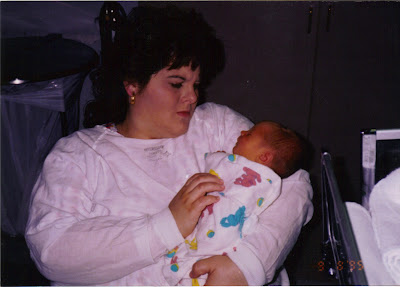 The Bean arrived at 3:15 in the afternoon.  Because of all of the medication and lack of nourishment over the last week, he arrives very lethargic and breathing slowly.  They take him to the Nursery to watch, order everyone out of my room so I can rest announcing quite out of the blue that I was very sick and quite honestly could have died having him.  I swear to you that no one had ever dad that to any of us - not to me, the husband, my parents, NO ONE.  Apparently my blood pressure was sky high and I could have stroked out.  Luckily (that's putting it mildly, huh?) I didn't and I was fine.  They kept The Bean in the hospital for a week after he was born.  That was hard - going home empty handed.  Finally, when he was a week old and we were able to bring him home.  He was on an Apnea Monitor which gauged his breathing to make sure that he was breathing in a timely fashion.  It never went off, not once the entire year he had it.  It was a relief knowing that if he stopped breathing that an alarm would sound and we could tend to him.  In the end, he was only breathing slow because of the Pitocin they were pouring into me trying to induce labor. 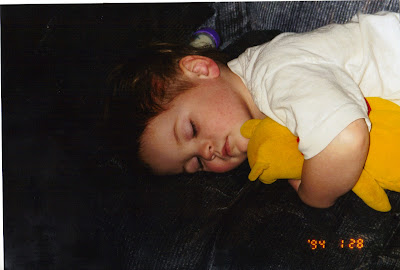 Being this kid's Mom has been great. 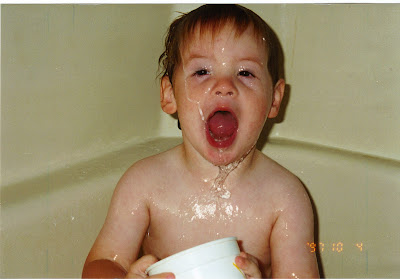 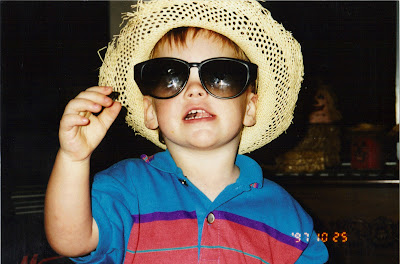 Then again, it seems like a long time ago.

He was such a funny kid. 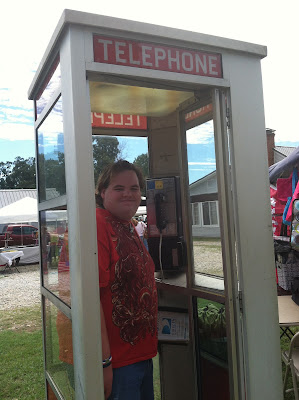 And now, even though he is growing up.  Or rather, he practically is a grown up.
He's still my kid.  And, I'm still his Mom. 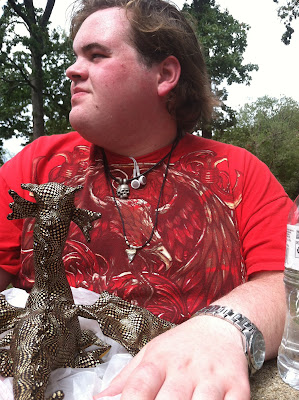 Sometimes he is hard on himself.  He worries if he buys something I might consider childish.  (Like the person that buys old squeaky toys is really one to judge anyone).  Case in point - that dragon in the photo.  He's bought one every year for the past ten years at the Craft Fair.  This year he worried that he was too old to buy one.  I said, "Are you going to put a Barbie on it and pretend to fly it to the Moon?"  "Uh, no - I;'m going to sit on the shelf with the rest of them."  Then you aren't too old to buy it, silly. 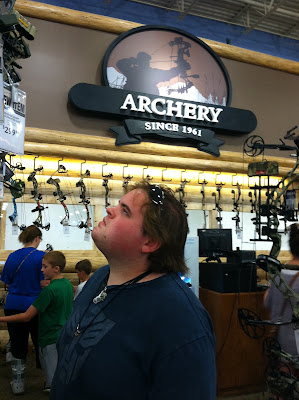 Then there are the times he looks at Crossbows and this Mom says, "You aren't OLD enough for THAT!"

No matter what age you are, you are only as old as you feel.

I love you Bean.