I kind of blew having a Week in Junk post since I already posted about that turtle quilt and my other finds.  Friday morning I read Craigslist and discovered that there were four sales on the street behind me.  So, I jumped in the car all ugly with no makeup or anything and went on a treasure hunt.  The first sale had a lot of older stuff, but most of it had gotten absolutely drenched on Thursday when we had an unexpected downpour (which we needed oh, so badly but it was so fast and heavy that it did not help at all).  I was digging in a box of Christmas stuff and about two thirds of the way down, I hit water.  Ick.  I did manage to scoop out a nice big old Santa Boot planter which I have already packed away without photographing.  On to a tub full of craft supplies and it was full of water too.  I dug out three half pint quilted Kerr jars full of old plastic faceted beads and quit digging.  There were other things I would have liked, but they were soggy.

I did happen upon one huge tub chock full of older greeting cards.  They were dry - all the way to the bottom.  I saw some cute older kid's Valentine's and some sweet Easter cards, so I asked how much they were.  They told me that thew were 10¢ each.  I thought about how damn hot I was and the sweat was dripping off my nose and how I would have to squat or sit on the hot concrete to look through them and I decided that was just not an option.  So, I asked, "How much for all of them?"  And they said, quite quickly, "$3.00."  SOLD!  They 8 year old daughter had gotten in trouble the night before so her punishment was to do whatever needed to be done at the yard sale.  So, they made her take all those cards out of the tub and put them in a big bag for me - she was sweating and sitting on the hot concrete and well, didn't I just feel like a big old meanie.  I tried to help her, but the Mom said "NO! She is learning a lesson." No, she was about to have a heatstroke, I thought. 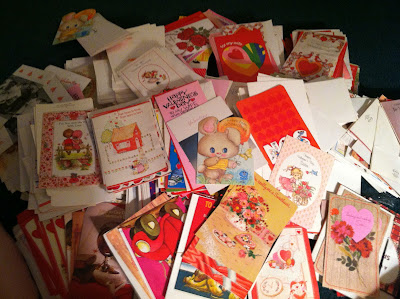 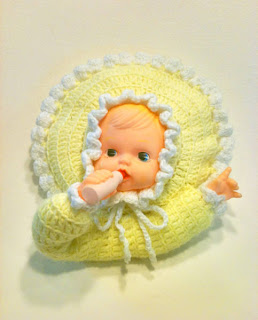 The only thing I bought at the other three sales was a pillow a lot like this one.  Except the one I bought is a big white square with yellow trim and far, far, far more creepy than this one.  It was only 25¢ and I do enjoy having one piece of vintage kitschy crap-ola in the booth to attract attention.  I sold my CREEPY CLOWN so I need something else to fill the void.  I bet she sells too. 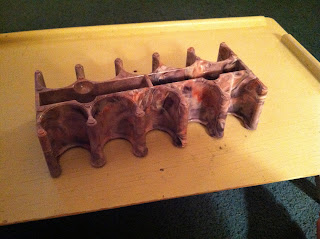 Stopped in Goodwill later and only bought this old Catalin/Bakelite poker chip and playing card rack.  It will go on ebay later this Fall.