Things In My House

I look to look in other people's houses.  When I was little we would take walks just before it got dark out, right before everyone closed their blinds.  You could look in and see their living rooms and how people lived.    I've always found it interesting to see the things that people choose to put on their walls, look at every day and live with year after year.  Some people have giant framed sports photos over the couch, others have family photos on every wall.  One of the first disagreements that we had when we were setting up our first home was that The Breadman was adamant that we hang an calendar in every.single.room.  And, not like on the back of the door where only "we" would see it, but as in right by the front door and by the dining room table and by the bed and in the bathroom near the toilet.  I was very, very, very, VERY adamant that we would NOT hang a calendar in every single room.  One calendar, in the kitchen, was enough for any normal family.  Twenty one years later and it is still working.  I have never once regretted my decision to hang a calendar by the toilet.  No sireee. 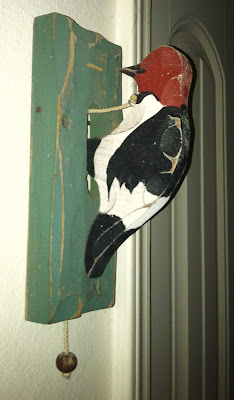 Folk art handmade Woodpecker door knocker.  This hangs on the left of the utility closet in the hallway.

When we first got married, we knew another newlywed couple and we would often go to their house for dinner.  I think she had bought stock in Home Interiors because every room had a different arrangement of three pictures, a shelf under each picture, fake greenery and a porcelain statue.  She had the same candle on each end table and matching table runners and throw pillows.  It looked nice, but it was all so matchy-matchy and it looked exactly like the pictures in the catalog that she would shove under my nose hoping I too would join the three picture, shelf, fake greenery statue club.  I am happy to say that I did not. 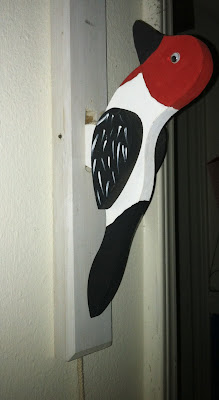 Folk Art handmade Woodpecker door knocker #2.  This one hangs on the right side of the utility closet.

Instead, I joined the the yard sale brigade.  And, I found unique one of a kind vintage items that did not break the bank.  Items that love and adore.  Things that are me and no one else has.  I like being different and having different things.  I don't often have house guests, but when I do they usually tell me that I have interesting things and they love to look around.  I know I definitely have more things than the average person.  Most people I know have one single pottery vase on the shelf.  Not over 100 in one shelf like I do.  But, that's okay by me.  I like it and I'm not going to change to be like "those people." 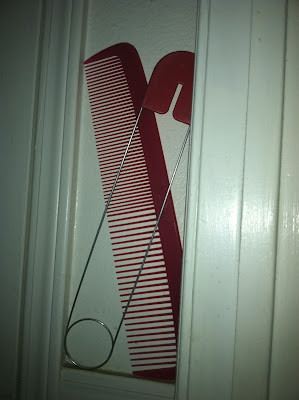 Giant red comb and giant red Safety Pin Carnival Prizes.  These are in a teeny nook in the wall between the linen closet door and the bathroom door.

There is a single man that lives around the corner from us.  His living room walls are completely bare.  Not one thing on all four walls.  He has a recliner and a TV and he leaves the overhead light on while he watches TV.  I am DYING to get in there and slap some crap on his walls!  And buy him a lamp.  It's driving me crazy!

Vintage Ajax Paper Cup Dispenser.  Hanging in the kitchen.  The Breadman pointed to it and asked me "What is that?'  (He never notices ANYTHING!)

Do you have unusual things in your house too?  What do other people think about your "stuff"?