Old toy trucks are the newest thing in vintage decorating.  On Pinterest, I have seen them holding everything from the remotes on the coffee table to TP in the bathroom.  Once I see something old and junky being used in a new clever way - well, I MUST have one. 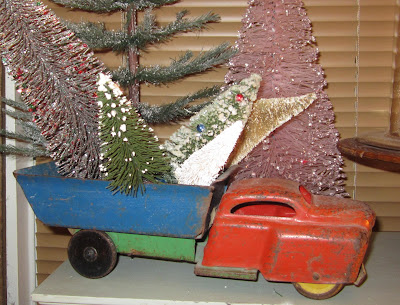 I had been on the search for an old truck for quite awhile, when my Dad showed me the perfect specimen in his closet last Christmas.  He asked me to see what it would sell for on ebay, so I brought it home and looked it up for him.  But, before I looked it up, I slapped a few vintage bottle brush trees in it and put it with my Christmas decor.  And, I LOVED it.  I looked  it up on ebay and determined, in my opinion, that it was worth some money, but not enough to sell it for that amount.  I told him what I had found and he told me just to keep it.  Woo-hoo.  The perfect vintage truck.  LOVE!  I put hearts in it at Valentine's Day and German eggs in it at Easter.  It looked fantastic.

But, then, one day, my Dad came over and asked for the truck.  I was sort of sad to see it go, but it was his and I knew he would take it home and I could visit it and own it again someday long from now.  So, I gave it back to him and watched him leave with it tucked under his arm.  Later that night, he told me that he....that he.......that he........gave it to an old man he knows.  GAVE IT TO HIM!  Gack!  Now, I never could tell him that I loved that truck and I would have bought it from him.  He just doesn't always "get" my junk and my decorating and I'm sure it never, ever crossed his mind that his 40 something daughter wanted that truck.  So, I never said a word.  (And, you WILL NOT say a word to him either please, any of you Richardson's reading this....thank you!).

So, I have been on the quest for a new old truck.  One of my very own.  Last Saturday, I stopped at a sale and underneath a table, I spotted a flash of red. 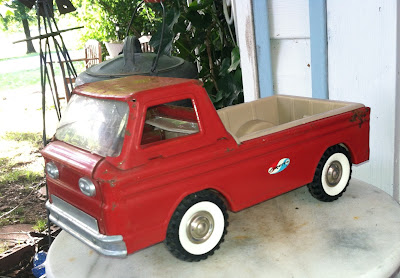 I pulled out this neat of Strutco truck and decided it would be a good replacement for the other truck.  It isn't as old or as colorful, but it is neat and has character.  It was only $1.00, which was good.  An added bonus was a guy offered me ten bucks for it as I was walking to the car.  I think it will look great full of bottle brush trees and maybe a wee wreath on the front.