Today was my day to work at the Flea Market.  Before today, we only had window units and fans cooling this store, but as summer is getting fierce - the A/C guys came and installed Central Air.  Unfortunately, they didn't gt it installed until after I had been there all day and after they had to turn off the breakers and leave me with no fans or window units running.  It ended up being about 95 INSIDE the store before I finally got permission to go home.  Next week should be a whole new ballgame with nice COOL air blowing around.

Before it got beastly hot in the store and before my mood got completely shot to heck, a sweet young couple came in to look around.  I was in the process of putting items in the store on our Facebook Page and I had just posted a photo of my hutch with a reduced price of $125.00 on it. 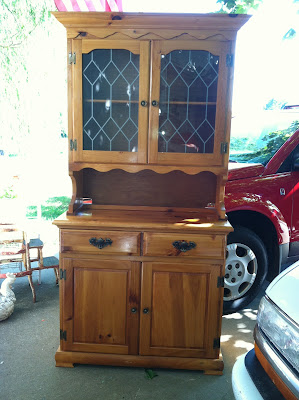 The couple walked around the store and when the saw my hutch, they just stopped in their tracks.  She said, "Oh, honey.  It's just what I've been wanting!"  The looked at the tag that I had just marked down to $125.00 and they started talking.  They were trying to budget in gas for a trip to the Children's Hospital.  They were looking at their calendar seeing when his Disability check would come.  Meanwhile, she kept caressing the hutch with such love.  It really got to me.  I know it's just a piece of furniture, but I have had love for pieces of furniture too.  I understood.  They asked if we had layaway, which we do not.  They kept adding up figures and talking about what money they needed and when they needed it.  She sighed and said, "I just wish we could, it's exactly what I want."  He said, "I know, baby." Then he said, "I'm going to figure it out."  That's when I decided to step in and make it happen.  I told them they could have it for $100.00 cash right then if they could swing it.  At first they asked me to hold it until the weekend, but then the husband said, "No, she wants it now.  I'll go to the ATM and get the money," and off he went.