Thursday I was on the way to the Super Cheap Thrift (you have no idea how many emails I get from locals or people visiting the area that say they can't find the SCT in the phone book.  Ha!  That is just what I call it!  That way it is my secret!).  Anyway, I was on the way to the SCT when I saw a BIG SALE sign.  Screeeeech.  It is February and not exactly yard sale season, but the weather is so darn ince that people should be selling their crap - people are clambering to do things and go junk hunting.  (My, I am getting off topic here aren't I?) Okay, so, I was on the way to the SCT and I saw the sign, so I hit the SCT, then swung back around to hit the BIG SALE.  I'm sure you can figure out that the BIG SALE wasn't too big once I found it, but it may have been earlier in the day.  It was actually in seven abandoned storage units - all owned by the same man.  This man liked to go to stores that were closing and buy all the fixtures and equipment.  By the time I got there, it was mostly junk that I couldn't use like six ungodly bright yellow hard melamine booths from a convenience store and fifty bgs of concrete (which were free) and a china cabinet that had good bones, but needed way more help that I had to offer up.

I did find several, old beat up menu boards in a couple of the units.  The boards were plastic and had little to no character, but they had hundreds of letters on them.  Plus, I found two plastic boxes full of letters and several stacks of letters still connected in there original boxes.  I have a nice sturdy old menu board and have been looking for more letters for it, so I bought all the boards and the letters. Then I came across a box that weighed a ton - I couldn't even lift it it was so heavy.  It said $5.00 for the box, so I decided to take a chance on it.  I could see it was full of staplers - both new and cool old ones, old hole punches, some neat old date stamps (that ended in 1979) and some other random office-y type things.  When I unloaded it at home, I discovered the reason the box was so blasted heavy. 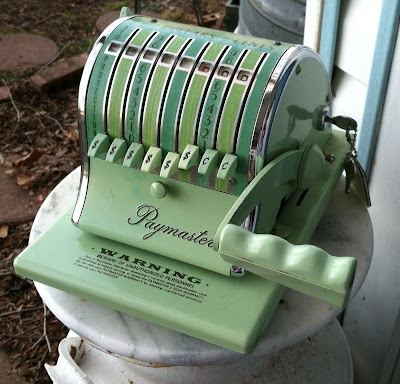 This old Paymaster Check writer was at the bottom of the box.  I have one of these already and I have shuffled it from booth to booth and marked it down repeatedly.  But it is just a plain old gray one and the key is missing.  This one is art deco looking, a fantastic color of green and it has the key.  A similar one sold on ebay for $89.00, so it will go there.  Shipping will be a bear cost-wise, but they pay it, not me.  Whew!

The rest of the office stuff will go either in my junk drawer or in the booth for a few bucks each.  Not bad on my $5.00 investment.

Saturday I was at Goodwill when one of the clerks came out with a big armload of colorful fabric or maybe a bedspread or, well, I really couldn't tell what I actually was - but it looked cool.  So, I followed her!  When she walked over to the luggage area and dumped it all, I was confused as to what it was.  But, then I realized it was a whole bunch of new with tags Vera Bradley stuff.  I started grabbing it all up (as if there were hoards of people with knives behind me itching to get at it....Not) and told The Bean -"Go get a cart!"  He knows I have found a deal when I say that, so he went running.  It ended up being two garment bags, a huge weekender, a book cover, jewelry bag, hanging travel cosmetic bag, a cinch cosmetic bag, a curling iron case and another little travel bag.  It all had the tags on it and was unused. I spent a bit more on all of it than I normally like to spend.  But, I will just list it on ebay, cross my fingers and wait.  The pattern is Royal and retired in 1998.  Maybe someone still wants it.  And is willing to pay for it.  :) 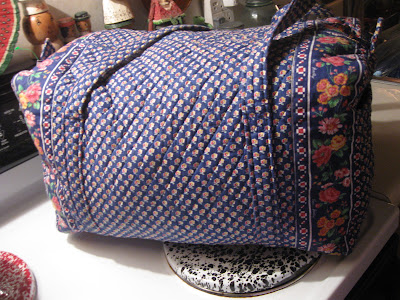 Actually, if I can sell the garment bags for what I think they will sell for - I am going to keep the giant tote for myself.  That thing is huge! 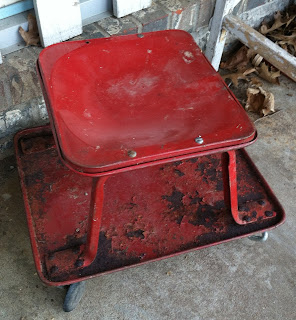 Other finds along the week include this crusty old metal stool.  Perfect for sitting on and scooting around the driveway while I price things.  Or I might sell it.  $3.00 at a new "junk shop". 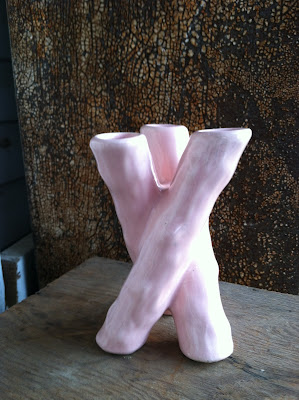 Interesting PINK pottery piece with three individual vases.  Looks good with my pottery and it was 50¢. 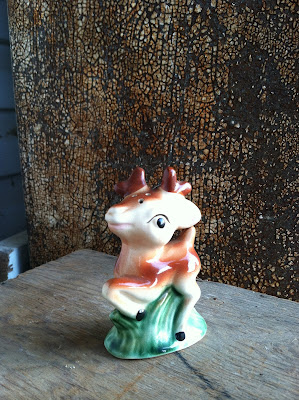 One cute vintage deer Salt or Pepper shaker - 50¢.  I seem to sell single S&P's in my booth a lot. 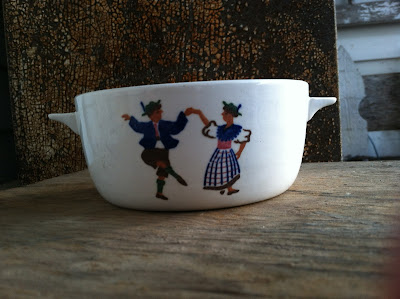 This cute little bowl was 50¢ too.  I've never seen this line of dishes, but I think it is pretty darn cute.  To the booth it will go. 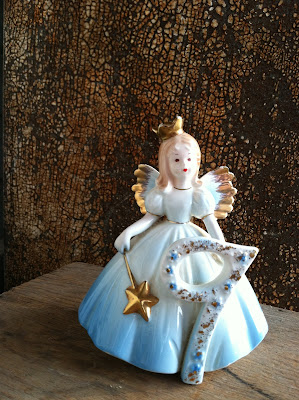 A Josef's Original #9 Birthday Angel.  Either for my birthday collection or the booth.  I'm not sure yet.  I'm a looooong way from 9!  But it is cute.  Hmmmmmm.... 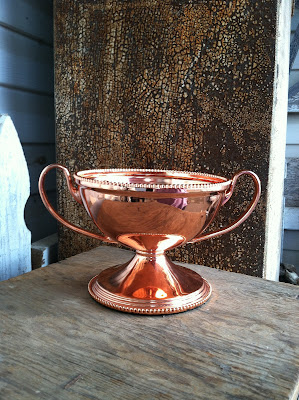 A big copper loving cup - it's not exactly new, but it's not 3exactly old either.  I don't know - I thought I could do something with it along the line - make a trophy, use it for display or something like that. 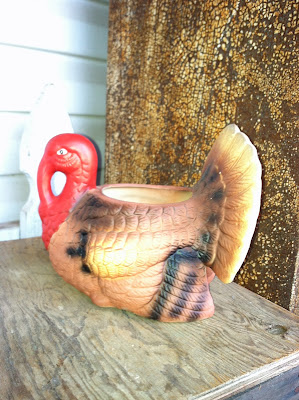 And a turkey for my turkey collection.
My Turkey Collection.
(I swear, I really do collect everything!)

Although I have plenty of stuff around here, I am itching for yard sale season to start so I can find new old crap for my booths!  I got paid for both my booths and my ebay sales for January, added up the sales, subtracted rent, commission, ebay fees, PayPal fees and ATM fees and guess what - I am actually FINALLY making some real money to contribute to the household.  It makes me feel great that my junking is finally starting to actually help out our little family unit. And, the added benefit is that I MUST THRIFT to make more money.  There are worse things, right?  :)
Posted by Shara at 10:24 PM