We went to the Mardi Gras parade.  I know I get really excited about any and all holidays, but honest to Pete, Mardis Gras is my very favorite day of the year.  The parade is so much fun - everyone is dressed crazy and the mood is just awesome. 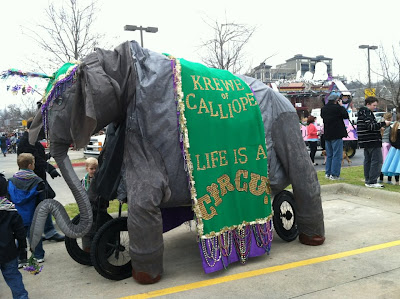 People go crazy for sill strings of plastic beads.  Everyone is in a great mood and everyone is having so much fun.  I enjoy it so much.  It really is one of my favorite days.  I got a few quick photos on my phone, but not very good ones.  I couldn't have a camera in my hands, I had to catch some beads!  We caught 200 strands between the three of us.  Such fun! 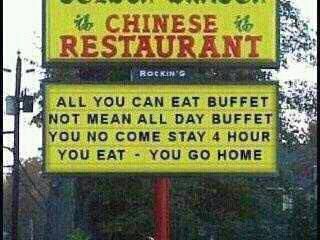 (Stolen from the internet...not our buffet)
We ate at the Chinese Buffet.  I don't like to go there very often, but when we do - YUM.  They have a hundred dishes, but I pick things out of about six dishes and make my own concoction.  I bet they just love me there. 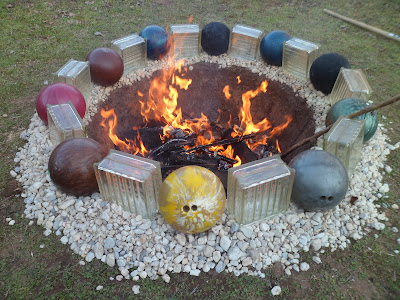 We finished the Fire Pit.  And made a fire.  We didn't have enough bowling balls to go around it, but I remembered that I had a stack of glass blocks, so we added those in and finished it off.  I liked it and the look of the fire through the blocks was cool.  In order to get the fire out, The Breadman completely doused the fire and the surrounding area with water which shattered several of the blocks.  Bad, Breadman. So, we still need to figure out something else.  I cannot imagine this family ever completing an entire project in one fell swoop anyway.  Sigh. 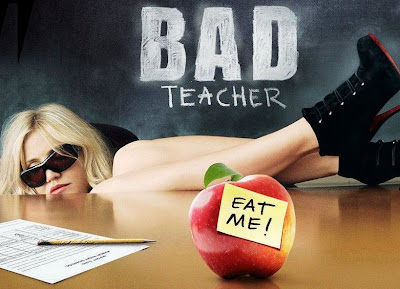 I sat on the couch and watched an entire naughty movie with swear words all by myself and didn't have to worry about anyone hearing them.  You have no idea what a rare thing that is - I never just watch a movie during the day or any other time, really.  The boys were working on the fire and since I am allergic to smoke, I got to go inside.  Heh heh.  I watched Bad Teachers which was totally awful with the sexual innuendos and swearing not to mention the overall horrible behavior of the teachers.  But, I laughed and laughed.

I went to Goodwill to the 85% off sale and didn't find a single thing worth buying at 85% off.  I did buy a set of wooden doll bunkbeds and a small chalkboard for the booth.  There was a man walking through Goodwill singing "I will always love you" at the top of his lungs.  Weird, since Lady Antebellum was playing on the intercom.

I scavenged in the dumpsters up the street by flashlight late at night, much to the embarrassment of The Bean.  The people moved out last weekend and this weekend, a load of Bagsters was delivered and the owners started cleaning out the house.  They sat some shelving, a TV stand, TV, VCR/DVD and the appliances out by the road as well as filling up three Bagsters.  One man's trash is another's treasure, so I went to have a look.  The Bean came along to make sure I was safe out in the dark.Sadly, it really was all trash.  I did find five brand new rolls of wrapping paper still sealed up, a nice pair of sunglasses in a velvet bag and four new Kerr canning jars.  Sunday they added more, so we went for a second look.  This time the overwhelming stench of the remains of the freezer drove me away.  As  I was going up the sidewalk on my way back, I looked over my shoulder and The bean was coming with a huge safety cone he found beside the Bagster.  "What are you going to do with that?" I asked.  "I don't know......but it is COOL," he said.  That kid has his Mom's junking genes.  Even if he doesn't want to admit it.

So, what did you do this weekend?