There Are Angels Among Us

Around Thanksgiving, I had an email from someone asking if still had something I had pictured on my blog in November 2008 and if it was available for sale.  I looked back at that entry and saw this photo.  A man named Charles was asking about the angel topper on the left with the fringe.  I told him that I was sure I had sold it not too long after I got it.  He thanked me and said, "The search continues......"  It intrigued me and I wondered why he wanted it and how he happened to find it on my blog.  But I didn't remember having it anymore, so that was the end of that. 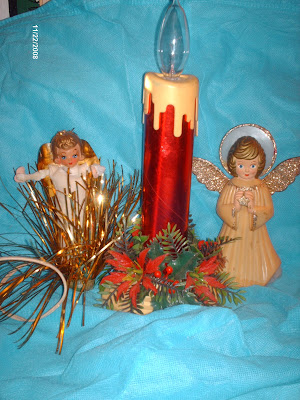 The very next night, I kid you not, I brought in my Christmas boxes to start my decorating.  I opened the very first box and what did I see?  The very angel that I thought was gone.  I honestly did not even remember that I still had it.  I decided to write back and say that I had actually found it.  It seemed like the right thing to do.

When I wrote to tell him that I had found it, he was very excited.  He told me that his sister had inherited their Grandmother's Christmas decorations, but the box was inadvertently thrown away by his brother-in-law many years ago.  She had been trying to replace all the items, but the tree topper had eluded everyone.  Until he found it on my blog.  I asked for his address and said I would send it to him.  It just seemed like the right thing to do.  He offered to pay, but I just wanted to let him make his sister happy.  I didn't even remember owning that angel and she couldn't forget not having it.

I sent it off and expected to just receive a simple thank you.  Instead, I received this video:
This is his sister, Tracy, opening the angel.  They left it in the box I sent along with my note.  I never intended to be the one giving it to her.  She is in tears before you can even see what she is opening.  As someone that loves stuff and the memories that stuff holds, this really made my day.  You can see all the love and memories that Angel holds for her and her family. (My favorite part is the "This was supposed to be FUN!)  I knew it was the right thing to do.

A week or so later I unexpectedly received a package in the mail from Charles.  It contained a box of Fannie May Candy (yum), a silver Pocket Angel Coin and this letter.

"Our Angel Story"
As you may know, I was diagnosed with cancer in April 2002.  My first surgeon set up an appointment with what is known as "The Tumor Board" at Stanford University.  This was a difficult and lengthy day, but at the end of the day I would meet my Guardian Angel.

After meeting with the doctors and going through the "Tumor Board" process they sent us to radiology to have a chest x-ray done.  We went into the waiting room where I proceeded to put on a gown and wait to be called.  As we sat in the waiting room, we noticed and older gentleman walk in and put on a gown.  On any other day we might not have paid attention him, however he had a ring of bells around his wrist and they jingled like Santa Claus.

After donning his gown he walked over and sat down right next to me even though there were a number of open seats in the waiting room.  After sitting down, he looked over a me and asked, "Are you in the process?"  I replied back, "I've just met with the tumor board and they've sent me for my first chest xray."  He said, "Oh, you're just getting stated.  ;'m here to have my last chest x-ray to see if the esophageal cancer is gone."

So we talked.  He said his name was Andy and he was an ex Pastor.  He assured me that everything was going to be fine and that we were in the best of hospitals.  As we talked I noticed that he had a very peaceful  look on his face and a very peaceful tone to his voice.  I asked about the bells.  He said that when he talked to the nurse to schedule his initial appointment he told her that he would be there "with bells on".  So for every appointment at Stanford, he wore bells around his wrist.

Then Andy asked me, "Have you gotten your Pocket Angel yet?"  I replied back,"No, I dpn't know what that is.  He said that they have them down in Oncology.  I replied back "I haven't been to Oncology yet."  With that said, he reached into his pocket and pulled out a Pocket Angel just like the one we have sent you.  Andy handed it over to me and said something like, "Here, add this to your arsenal of things that give you hope and faith to get you through this."  I thanked him and then I got called in for my x-ray.

As I was getting my x-ray, Susan and Andy talked a bit.  He gave her a business card with his home number and said if we needed to talk to please give him a call.  She tucked the business card away and continued to talk.  When I came out of x-ray, I got dressed and we said our Good-bye's and Thank-you's.

A day or two later, I asked Susan for Andy's card so that I could put it in my Palm Pilot.  She looked high and low for his card, but couldn't find it anywhere.  She looked in every place she could think of but found no card.  I told her not to worry, next time we're at Stanford we'll just ask the different receptionists if they know the guy with the bells on his wrist.  Surely someone would have seen this man.  We asked in Oncology, Radiology, Infusion and others.  No one can remember a man with bells on his wrists.  I think it was then that it hit Susan and I that I was visited by my Guardian Angel.

We began to tell our story to family and friends.  It took me a long time to be able to tell the story without welling up in tears.  As I was telling the story one day, I was reminded of the the famous line in the movie, "It's a Wonderful Life" where the little girls says, "Teacher says, every time a bell rings an Angel gets it's wings"

That is quite a story, isn't it?  When I wrote to thank Charles for this Pocket Angel and to ask permission to share his story, I also asked about his current health.  He responded:  I'm doing well, thank you. This April will be 10 years (WOOHOO) and our Guardian Angel has served us well. Andy brought us through a lot! While they'll never say melanoma is in remission or "I'm cured" the fact that I made it almost 10 years now is nothing short of a Miracle (85 out of 100 wouldn't be writing an email).  We'll definitely  celebrate the milestone  And by all means feel free to share the story, it's a really good one if I don't say so myself ;-) 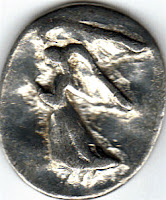 It's taken me a long time to process this and write it down to share with everyone.  I'm not really a religious person, per say, but I believe in doing what is right and treating people the way you wish to be treated.  I believe that there are angels out there watching over us and guiding us along the way.  I believer that if you feel like you should (or shouldn't) do something, then you should listen to your heart.  And, now I have my very own Pocket Angel to remind me of that thanks to Charles and to Andy.
Posted by Shara at 12:10 PM