Oh my goodness - the rain we have had!  The weatherman says we have received about 18" of rain in the past few days.  It rains and it rains and it rains.  Crazy hard and crazy fast.  Yesterday the ditches filled up and the yard across the street had water standing in it, but once the rain subsided for a while, it drained away.  But, today it rained absolute buckets.  I was beginning to think the water was going to come into the house if it kept up at the rate it was falling. 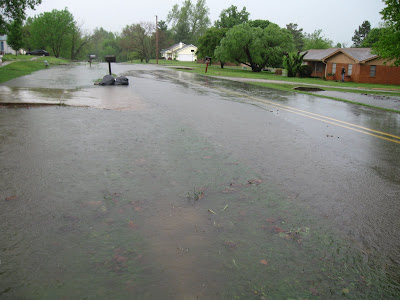 I took these about 11:00 and before another five inches of rain fell.  After that, you couldn't see the street, the grass or anything else but water, water, water. 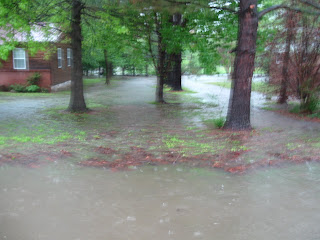 This is the two yards across the street - before the extra five inches.  After that, it looked like a lake with trees in it.  It was trash day and bags of trash kept sweeping down the street blocking the culverts.  The man next door and the Bean and I set out to keep the culverts clear, but it wasn't easy. 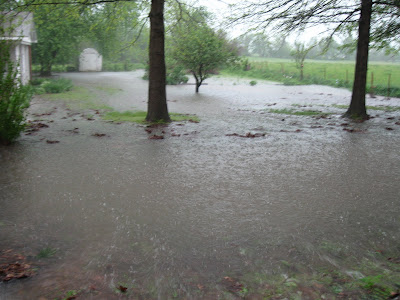 This house is directly across the street - that's her garden in the background.  Or rather, what used to be her garden.  It got really deep by the end of the day.  The pasture behind her house had at least a foot of water standing in it too.
We live near the city park which has a small creek that runs through it.  The creek is usually about five feet across and only a couple feet deep.  Today it was running about 100 feet across and I don't even want to know how deep.  The force was so intense that it actually raised up part of the street that runs over it and broke off the street signs.  I know that a lot of you have probably been around floods, but to those of us that live in the Ozark Mountains, it isn't something we have had to deal with before and it is scary stuff.
The Breadman found himself in Oklahoma and news that the highways were closing down due to the Illinois River flooding the highways.  He stopped working and drove back towards town to beat the rising waters.  He made it back, but still had to be diverted and take different routes back to work and home including our very own street that was closed.  He came home looking a bit like a drowned rat and was not in the very best of moods.  But, at least he finally got home.
Right now it isn't raining or thundering or lightning and it is so quiet!  I forgot how the night is supposed to be quiet!  It is supposed to rain again tomorrow and Wednesday, but hopefully, this break will let it not flood so badly again.   The weatherman just said that the amount of rain we have had would be equal to TWELVE FEET of snow.  Shazam!
*Thanks to those of you that emailed to see if we were okay - I really appreciate it.  And to Vintage Whimsy that was so worried about tornadoes - none hear, thank goodness, but Southern Arkansas is getting slammed bad.
Posted by Shara at 9:49 PM