What I Didn't Know Back Then

Everytime I had ever been in the Breadman's parents house people would say, "Boy, have you got a big job cleaning this place out someday!"  Of course, I thought this would be years and years later.  But, they both died with in months of each other about seven years ago.   Cleaning out the house was a HUGE deal - we filled a giant Dumpster to the top full of paint splattered kitchen appliances, old towels, ratty clothes and out of date grocery items (Some so old that The Breadman realized they had actually moved with them twice!).  In my eyes, the entire house was full of absolute crap.  There was very little that we brought home - a old wooden table, a 25 gallon sauerkraut crock, a milk can from his Grandparent's Dairy Farm, an old sausage grinder and a few other old items.  The Bean gathered up all the Leo Ward Bluebird's of Happiness to keep and the rest was either sold or donated to charity.  The last customer of the day expressed in interest in the dryer and we ended up giving it to him along with the living room furniture, the microwave, boxes of dishes and towels and I don't know what all else.  He spoke Spanish and wasn't 100% sure that we were giving it to him, so he called in an English speaking buddy who we reassured that it was definitely all free - anything left in the house was his for the taking.  They took it all and we were grateful for it.  I like to think that somewhere, the Breadman's parents house was completely re-created with all that stuff.  But, I bet they had a yard sale and sold it all.
At some point before the sale, my Mom came to help and looked around.  I honestly have no memory of this, but she apparently did some shopping and bought a few things.  Earlier this week called to tell me that she had something that she bought at the sale to bring me.  Well, why would I want anything from there?  I had sold it all.  It was junk.  I didn't want it......then.
So, what did she buy back then and bring to me this week?  What had I priced at only two stinking dollars back then? 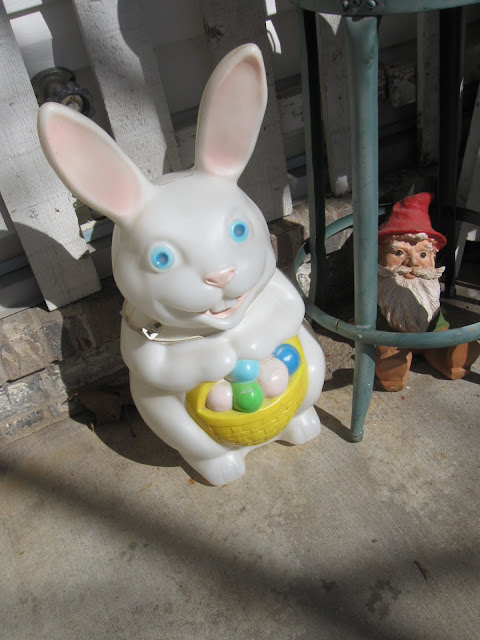 A ginormous Easter Bunny Blow Mold!  Argh!  What was I thinking??????
I wasn't into vintage back then so I just didn't see it for it's coolness.  But, now!  Fantabulous!
Now, if you are wondering if I let any more fabulous things go, I did not.  The house truly was filled with crap.  And it all had to go.  But, I am thankful that my Mom saved this bunny from the sale and that she has given it back to me!  Thanks Mumsie!
~~~~~~~~~~~~~~
For the curious, I did go to the Church, but not until the car was done at 2:00.  The Church was still full of stuff, but I really only found a few things to buy.  I'll share those tomorrow.  Nothing too exciting, but with those things and what I found today at the thrift - I had an okay weekend.  (HINT:  A tisket, a tasket, I found a Redman basket....)
Posted by Shara at 10:53 PM