Accidents Happen and My Thrifty Finds

Today I pulled all the Easter things from my booth and immediately took them to the thrift to donate them.  I debated keeping them or sorting through them, but in the end, I just gave them all to the thrift.  I just have so much stuff that some of it really needs to GO!  I did sell a good amount of it, so that's good.
I did find a few goodies at the thrift, but I did something really awful.  I was looking at a jewelry box, and I had one of those shopping basket on my arm.  When I turned around to walk away, my basket hit a HUGE clay vase that was siting on the edge of the table.  That thing was GIANT.  It hit the floor and sounded like a semi full of dishes hit the floor.  It got so quiet in there after the crash.  I was horrified that it happened, but even more horrified when I spied a piece of the tag that said $19.99 on it.  Holy hell - I am going to have to pay $20.00 for a broken vase!  As I picked up the pieces, I cannot tell you how many customers came to group around me, mouth agape and stare at me.  "Uh-Oh, you broke it," one helpful lady pointed out.  Geez, it was an accident, I didn't mean to break it!  One by one they all left, but not one single thrift store person came to see what all the noise was about.  I picked it all up and piled the pieces up on the table when finally a lady came out of the back.  She looked at the floor and she looked at the pieces then she said, "Oh, let me get that - don't you worry about it one little bit, honey!  Accidents happen!"  WHEW.  She was super nice about it.  About a year ago at a thrift, I went to take a string of vintage beads off a display when the string broke and those damn beads fell and bounced all over the store.  I was so embarrassed and to make it worse, the old hag at the register went on and on and on about how I "needed to be careful when I handle things in a store" like I was four years old or something.  So, for this lady to be nice to me was, well, nice!
I had a guilty conscience and needed to buy something!  Luckily, I managed to find a few goodies that I liked. 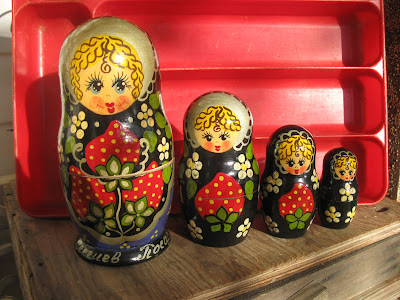 The biggest set of nesting dolls I have found so far!  I spotted them in a cart "to be priced", so I stood by it until the pricing guy came back.  He priced them $1.75 and handed them to me.  I asked about several items and he priced them all $1.75.  I passed on a few.  I also found the old red Lustroware silverware drawer for 79¢. 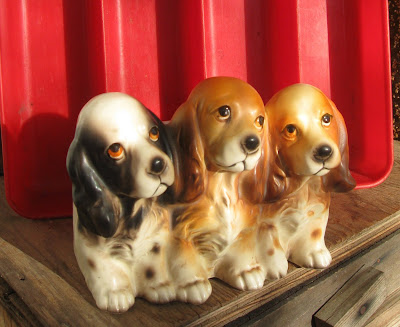 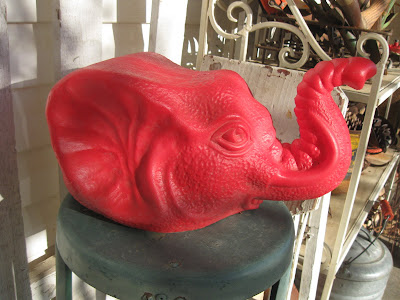 I was surprised to see this University of Alabama hat - actually, I found two of them.  They were made in the early 1970's right here in my town.  "Hog Hats" are very popular here - big red Razorbacks that sit on your head.  But, I have never seen any other mascot depicted as such.  Any Crimson Tide fans here know what these are called???  The old Hog Hats sell for $50.00 or so, so I am hoping the same is true for these.  Did I mention that the hats were...wait for it...$1.75?
I was looking at an old sewing machine mounted on a desk and on a whim, I pulled open one of the drawers.  I was surprised to find all the drawers packed with old patterns, thread, sewing implements and trims.  I dug through it and pulled out two Bucilla needlepoint kits and a couple other vintage items (Which I forgot to photograph....) and went to find out how much they would be.  I was told that the contents go with the sewing machine.  Well, I thought that was just dumb - who is going to use all that stuff and the machine?  So, I asked my friend at the the pricing cart and he priced the pile....wait for it.....$1.75.  :D
A couple weeks ago it was Spring Clean Up in the town where my Grandmother's house is located.  All week long I kept saying that we needed to go out there and put some junk from the garage and the shed out for Spring Clean-Up.  Finally on Thursday, we headed out to pull some junk out.  Never, ever, did it ever cross my mind that there would be JUNK on the road for FREE.  What a dolt!  Once I found a pile and realized it - I spent about two hours driving around town looking for goodies.  In the end, I only found a few things, but the thrill of it was quite fun!  Everything I brought home was from the same house. 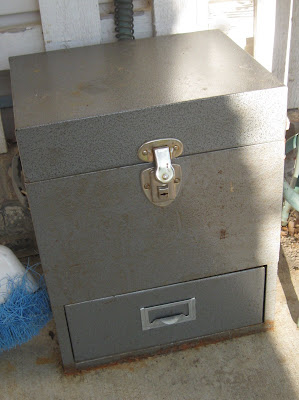 This heavy old file box opens at the top and has a drawer at the bottom.  Not only does it lock, but the keys were inside it in a tiny envelope taped to the top of the lid.  I also found a blue train case which is already at the booth. 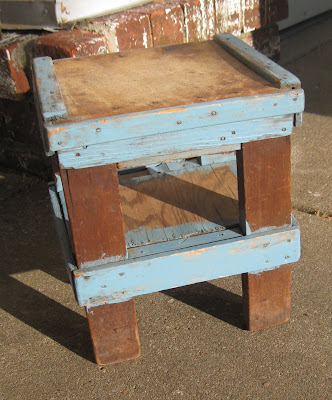 My favorite find - a tiny little stool, barely big enough for one foot.  Maybe it is a plant stand or something.  It is only about 10" tall.  It's dadgum cute, that's what it is!  I am amazed at the amount of work someone will go to to make something. 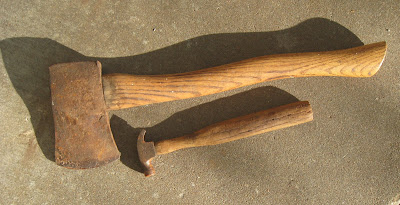 The Bean, although embarrassed by MOM jumping out and digging in JUNK by the road, didn't hesitate to roll down the window and point out the tiny hammer lying in the driveway.  When I picked it up, I spotted the axe handle sticking out from under an old shower curtain.  I would have hated to see these go to the landfill. 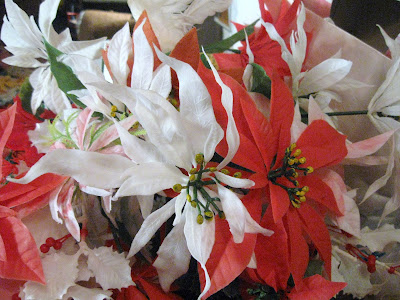 I drove by a house five times because I spotted an old barnwood table sitting by the curb.  I finally decided to grab it even though it was going to fill up the car.  But, as luck would have it, I have an entire house at my disposal right up the street, so I could drop things off as needed.  As it turned out, when I got the table unloaded, it was in worse condition than I first realized.  If I had a little bit more skill, I could have fixed it up.  Instead, I sat it at the curb and hoped that someone else might rescue it and fix it up.
Have you found any good junk lately?  At the thrifts or by the road?
Posted by Shara at 10:57 PM