There is a possibility that I have been home too long.  It is still really slick outside and the temperatures are only in the teens and lower.  So, I have now been home five straight days.  And, I really don't mind it.  I like being home and I have been sick, so I really haven't felt like going anywhere.  But, since I think of us as "snowed in", I have only been doing out of the ordinary things like baking, crafting, watching "Man vs. Food" (Must put three pound cinnamon roll on my "Bucket List") and "Ellen".  I've still been doing my laundry (which I must say is so much easier with my new large capacity washer.  I cannot believe how many loads I was doing before versus now.  Well worth the money!), but little else.  I've decorated for Valentine's day, baked three loaves of pumpkin bread, sewn a bunny doll complete with clothes and a few other silly fun things.
But, it was today's craft that made me think that just maybe I have been home too long.  Tell me what you think:
I've been on a quest for old vintage Valentine Heart Candy boxes, but I haven't found any......yet.  I did pick up a heart shaped Turtle box at the SCT a week or so ago for a quarter, thinking I could make my own "vintage" box. 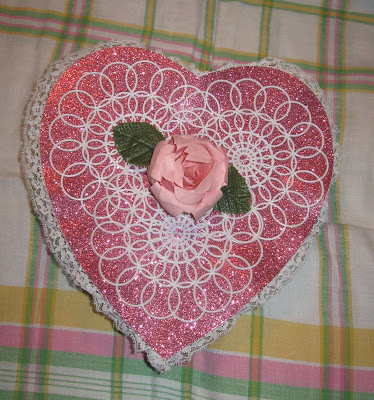 I trimmed the box top in lace, added the pink glitter paper and added three plastic "Tupper" doilies for interest.  I'm not thrilled with that paper flower, but it was all I could find at the time I made it.  I think it needs a big pink rose or peony. 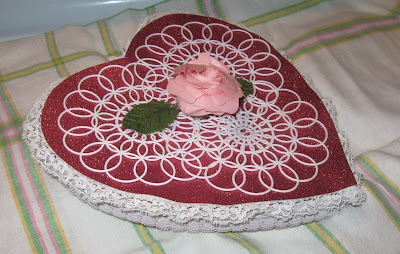 It actually turned out not too bad.  It's a little more frilly than my usual taste.  But, I think that it looks like an old vintage candy box.
But, the box was still just an empty box.  So, what did I do?
﻿ 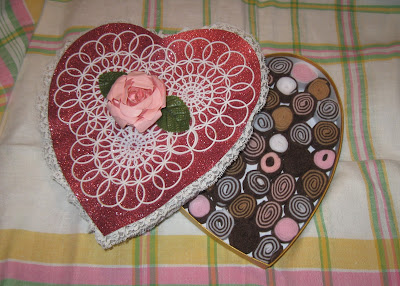 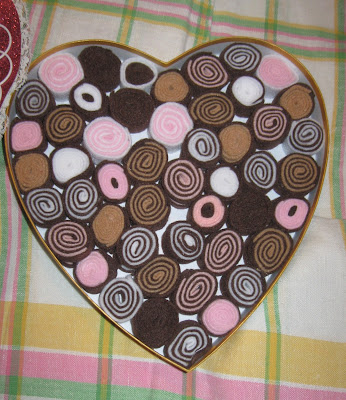 I rounded up all my brown, tan, pink and white felt and made jelly rolls, then cut them into slices.  As I was making them, The Bean looked over and said, "Those look like chocolates!" Which was much better than, "Those look like sausages!", so I felt I must be doing an okay job.  We have decided that there are chocolates, chocolate swirls, chocolate caramels, chocolate cherries, vanilla cherry cream, white fudge and so on and so on.  It would look better with some brown paper wrappers, but the only way I know to get those is to go buy an actual box of candy and gobble it up.  Not that that isn't a delicious idea, but probably not going to happen.
It's really quite silly, but at the same time, I find it rather fun and amusing.  I suppose I am lucky I didn't find an empty fish crate and be forced to make felt fish!
We have more snow coming tomorrow, a Winter Mix on Sunday, snow on Monday and snow on Wednesday.  I may never get to leave again!
What shall I make tomorrow?  :D
Posted by Shara at 10:30 PM