Oh, hello.  I haven't posted since last year!  Hope you all had a safe New Year.  We rang it in with New York and then again locally.  The buffoons up the street snuck over the state line and bought themselves a truckload of fireworks, so it was quite the noisy evening.  I remember when The Bean was little we could watch New Years in London and then go to bed.  But, now we stay up til midnight.  The real midnight.
Today The Bean and I drove out to look at the damage the tornadoes caused locally.  You probably heard on the news about the fatal tornado that hit NW Arkansas.  The main twister touched down about twenty miles from my house.  It was incredibly close to my Mom's house and I am forever thankful that she was okay.
The tornadoes hit Cincinnati, Arkansas which is a small community consisting of a church, a general store, a flea market and a fire station.  Less than one hundred people actually live within the actual boundaries of Cincinnati.  Sadly, three people died in the tornado that hit last week and an additional person died today from trauma they endured during the tornado.
I took photos off the cuff out the window as we drove along. I know that the people out in that area are tired of gawkers. I wanted The Bean to see the destruction and to understand what a storm can do to the land and to the people.  The photos aren't the best. 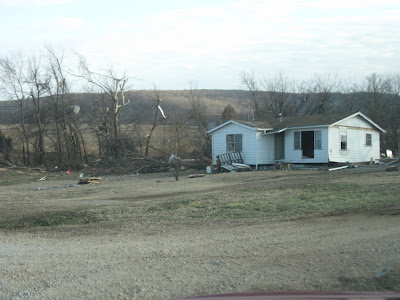 These first few photos are in Wedington where the other end of the storm hit.  This house is sitting beside it's own foundation. 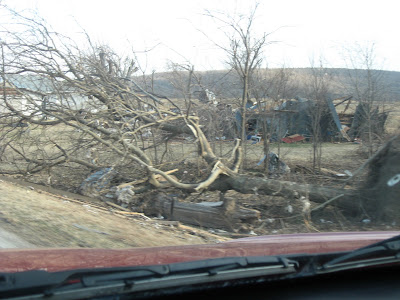 Trees down everywhere.  Old outbuilding in the background, demolished. 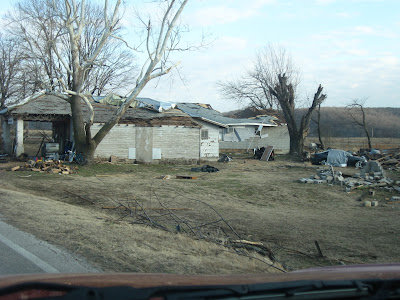 The local grocery store by the lake.  The siding is gone, the blocks are blown off, the roof is gone. 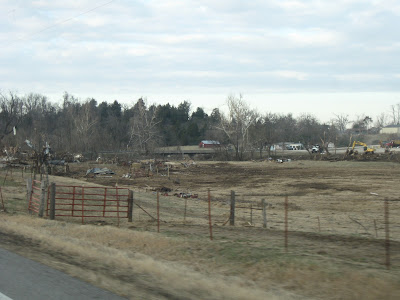 Here's the beginning of Cincinnati.  You can see the dirt where the storm tore up the fields. 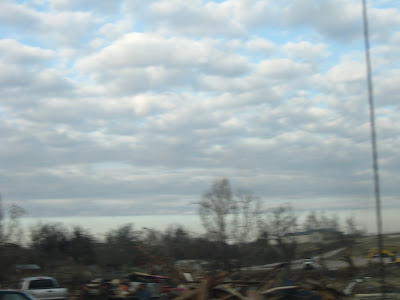 This is a blurry photo - but all that rubble is where a trailer stood and a barn behind it.  Two people died in the trailer and another one in the barn behind it.  This land was owned by members of Margo's Family.  Her Aunt lost her home and her Aunt's elderly parents lost their lives.  It is terrible to know a storm caused destruction.  It is terrible to know that people died in that storm.  And then, to find out that someone you feel like you know had family that died in that storm - well, that is just the worst. 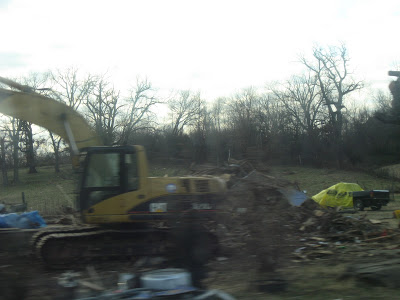 Tearing down the Fire Station.  The trucks were damaged, but not ruined.  The sign on the Fire Station tore into three pieces.  One stayed in Cincinnati and the other two were located nearly 40 miles away in different yards.  They returned the pieces of the signs today and the community united together as the sign was reunited.  The Fire Chief said, "It ain't nothing, but it's all we got." 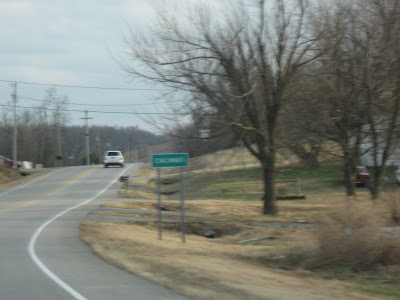 The city limit signs are almost visible from each other.  The damage is horrific at one end and there is no damage on the other end. 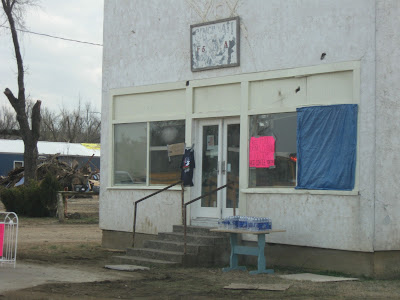 This little store had damage as you can see.  The pink signs says, "FREE food, drinks clothes, house items, hot coffee and cocoa".  Notice the table full of water for the volunteers too.  On the other side of the door there is a sign that says "Tetanus Shots Tuesday".  I assume the t-shirt duct taped to the door was found and they are hoping someone will claim it. 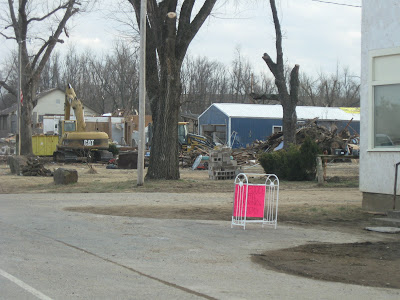 The remains of the Fire Station.  Broken trees.  A mess. 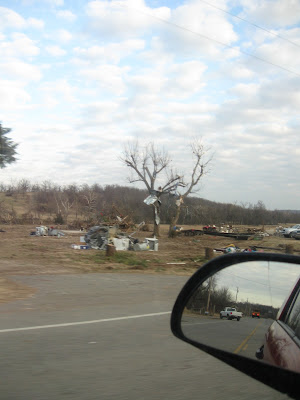 This is where the three people died from the other side of the road.  See that sheet metal wrapped up in the tree? 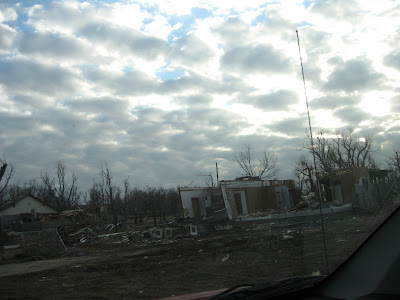 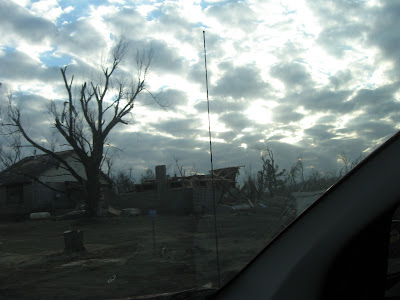 This house had an addition beside it connected by a breezeway.  The house remains intact.  The addition was gone. 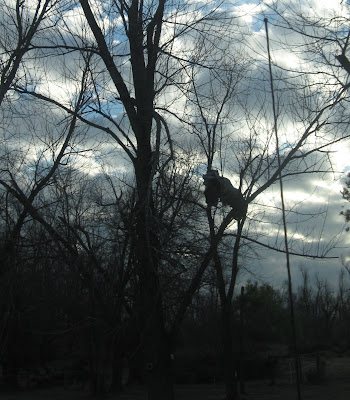 On the outskirts of town, we spotted a huge chunk of metal lodged up in a tree in the woods.  That will just stay there forever.  No one will go into the woods and take it down.  It will be there for the ages.
Tonight I am thankful for my family, my house and all my junk.  I am thinking of all of these lovely people and hoping that they rebound quickly.
Posted by Shara at 11:04 PM