Today we had snow.  Today it was 12 degrees when I got up and it never sent over 20 degrees.  Today was a very good day to stay home.  But!  My thriftsense was telling me to go to the Salvation Army.  I rarely ever go to the Salvation Army.  But, when my thriftsense tells me to go, by golly, I go!
When I walked in, I started my route.  You have a thrift store route, too, don't you?  I go in a certain path - it's different at each thrift.  Anyway, I started my route and came upon a huge plastic storage tub filled with huge wooden letters and numbers.  They ranged from about 6" tall to nearly 18" tall.  There were all sorts of scripts, fonts and sizes.  They were all cut out of wood and looked professionally made. 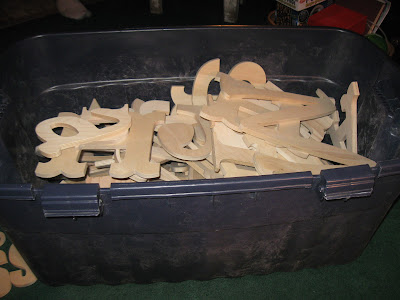 I dug in and found "SHARA" in nice big letters.  But, I figured I better inquire to the price before I got too carried away and before The Bean finished digging for his 11 letter name - so I had to go quickly.  I asked and they were only 25¢ each - no matter the size.  Woohoo.  Letters and numbers are everywhere right now.  I am in love with mixes of letters and different fonts. 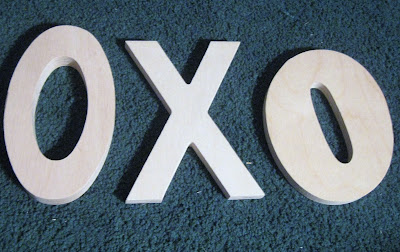 I started digging, thinking of words I could make, names of friends, words for holidays, etc.  Then I realized that I didn't know what to pick out.  I really needed them all.
So, I asked at the counter if it would be possible to just buy them all, or did they do that sort of thing.  (In the past, under different management, I would have been escorted off the property for even asking such a thing.  Right, Hope?  And, under different management, they would have been at least $1.00 for the small ones and up to $5.00 for the big ones.)
The checker told me to talk to the manager, so I asked her if she would sell them all for one amount.  She talked it over with the checker and then told her to name a price.  So, we walked back to the giant tub (it's like a tub you would put a Christmas tree in - huge!) and she stood and looked in it for the longest time.  Tick*tick*tick*  In my head, I was wishing for $20.00, but thinking she might say $30.00.  Guess what she said?  $10.00! 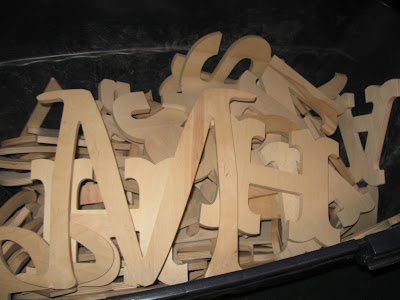 When we paid, one other lady said, "I can't believe you sold all those letters for only $10.00."  Then another lady immediately said, "Thank God they are gone, I have been picking those letters up all day." 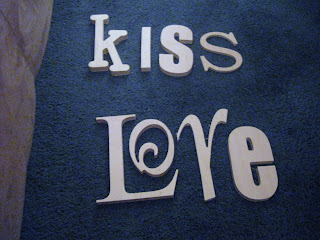 When we got home, I counted them and there are 189 total, which is nearly $50.00 worth at the 25¢ price.  Score!  I plan on picking out some to keep, selling some on Etsy and throwing a few in the booth.  I think they will be a lot of fun.  I've already made a montage of various "S's" by the front door. 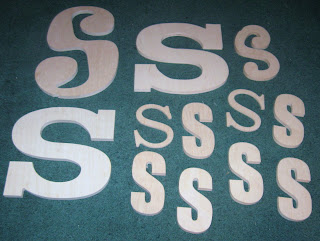