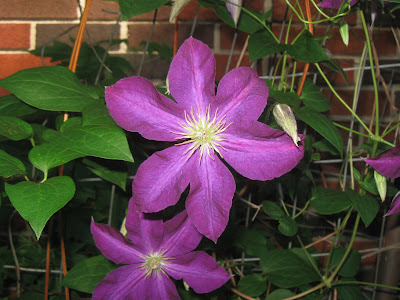 Clematis at my Grandmother's house.
Hi. You guys are so sweet.  I really appreciate all the sweet comments and emails I have gotten this week.  They really meant the world to me.
This has been a really hard week.  My Grandmother had been a great big old pain in the Wazoo to take care of the last few months.  But, she was still my Grandma.  In fact, she's the only Grandparent I ever had my entire life.  She was in a lot of pain and not herself the past few months.  I have to keep reminding myself of that fact.
She didn't want a funeral or even an Obituary.  She is controlling even in death.  But, that was her way.  We are doing a family Memorial Service later this Fall back in KS, just so the family can have a bit of closure.  By Memorial Service, I mean a family reunion of sorts in the park with Fried Chicken and Potato Salad.  Whatever works, right?
So, guess who's been put in charge of sorting through the house, donating and having an Estate Sale?   Me.  No surprise there, I suppose.  I was pointing out some Mid Century Furniture to my Uncle and he suggested a price of $50.00 for a three piece set.  And a Redwood Burl table for $25.00.  So, it might be a good idea that I am "in charge".  It's my Mom and me doing it, but I "know my stuff" as we like to say.  I have an artistic family, so there is a lot of photography, artwork, pottery and other creative things in her home.  A lot of that will go with family members.  Like I said, she wasn't your typical 84 year old.
Luckily for me, most of that stuff isn't really my taste, so I don't have to be bogged down by wanting to bring a lot of stuff into my already packed house.  I have found a few cool things and I know I will find more as time goes by, but they are mostly older things that belonged to my Great Grandmother (like a fabulous set of 12 snack trays in the same colors as those old Aluminum Tumblers and an apron with built in potholder pockets).  I know it's soon soon to be going through  a lot of stuff, but some of the family was here and needed to take a few things back with them since they were here. 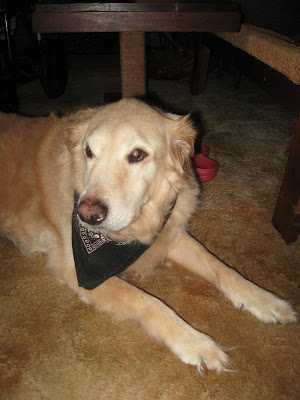 And, lastly, here's Peach.  She's such a sweet girl and we love her so much.  Her new Mom came and picked her up on Tuesday.  That was even harder than seeing my Grandmother go.  But, she has an wonderful new Mom that loves her so much and she will have a good life.  We are going to go visit her next week.
Thanks again everyone.  I was really touched by all of you.  (((Hugs))))
Posted by Shara at 10:16 AM