For a while now, I have been reading on blogs "Fall is here!" Well, it wasn't HERE. It had been hot and humid and just plain yucky. I couldn't see an end in sight. But, then this weekend...well, this weekend, it was glorious. It was only in the low 60's all weekend. that, my friends, is my type of weather. 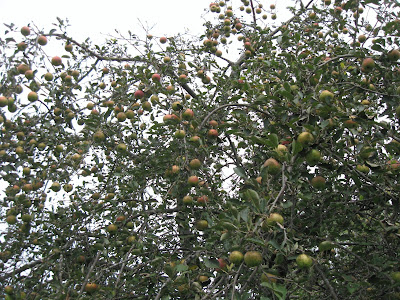 About two years ago we discovered an apple orchard on the backside of the local Civil War Battlefield.  We had been going to this Battlefield for years, but we had never found the Apple Orchard before.  The trees were touching the ground there were so many apples.  But, we didn't know if we could sneak one to eat or if that was against the rules. 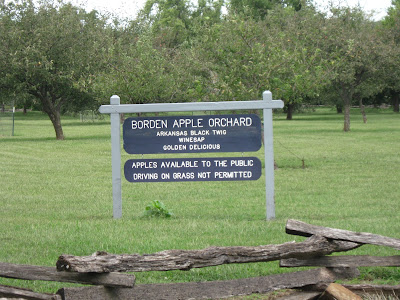 Then we spotted this sign, "Apples available to the Public".  We asked and found that the apples were FREE - all you can take, just pick them yourself, be neat about it and keep it on the down-low so they aren't swamped and picked clean in a day. 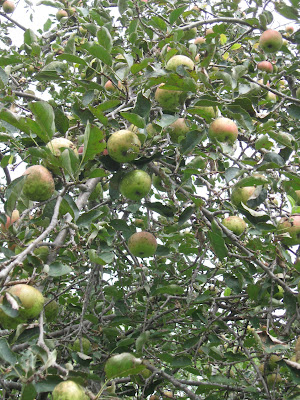 Last year we were excited to return to the orchard and pick baskets and baskets of apples - I would can pie filing, apple butter and apple sauce - even though I have never, ever canned in my entire life.  I would make pies upon pies.  We would share pies, freeze pies and eat pies.  Grandiose plans, indeed.  When we arrived at the orchard, there wasn't an apple anywhere to be found.  We thought it had been picked clean, but we learned that the ice storm had damaged all the trees and they were not able to bear fruit that year. 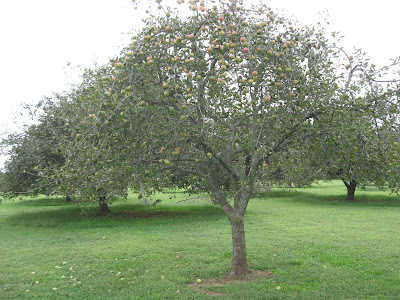 We returned this year and discovered tree upon tree of beautiful apples.  My plans are less grandiose this year - pick a basket to eat, a basket to give away and enough for a couple pies.  That's it.  We did pick a bushel of apples on Saturday and we are going back this weekend.  I tell you, there is nothing better than grabbing an apple right off the tree and biting right into it.  Crisp and juicy and delicious! 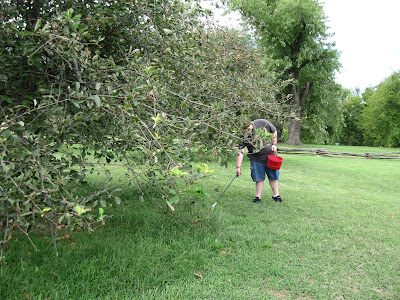 Here is our method for "picking" apples.  We do pick them, just not off the trees - we pick them up off the ground.  An older man was there that first year and he thought us to reach up, grab a branch and shake the tree.  Whatever falls out is ripe.  It takes two people to do this - the Shaker and the Watcher.  I shake the tree, the Bean watches to see where they fall and picks them up. 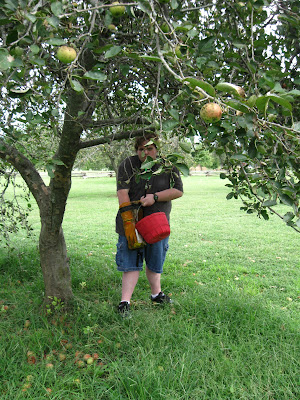 We found a bag of trinkets hanging in one of the trees and discovered that we had stumbled upon our very first Geocache.  Which is sort of funny, because we have actually gone looking for a Geocache, but never found one.  So, to have found one without actually looking for one, was fun. 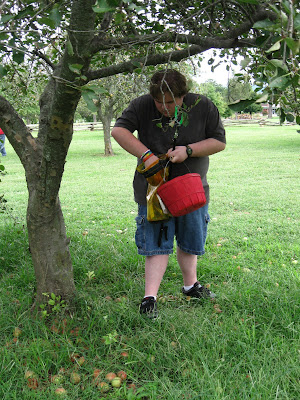 I had just left the Super Cheap Thrift and had some silly trinkets in my pocket from the FREE box, so we swapped out a thing or two and returned it to it's place in the tree.  Since then, I have learned that there are 15 Geocaches at the park, so we need to go on a full scale hunt someday soon.
The history of the Borden Apple Orchard in a bit gruesome, but it is true and necessary.  During the Battle of Prairie Grove, hundreds of soldiers were killed.  There were laid to rest in temporary shallow graves in a filed behind the Borden House.  When this particular battle ceased, the bodies were moved one by one Fayetteville to what is now the Confederate Cemetery.  The Confederate Cemetery is about a 25 minute drive, but I imagine it took days to go back and forth with each soldier's body during the war.  After all the bodies were moved, the orchard was planted in that field where it remains today.  I find it to be a beautiful and peaceful place.
Posted by Shara at 10:55 PM