Now that we have begun the heavy duty cleaning out of my Grandmother's house, I find myself in a bit of a STUFF overload.  Stuff at my house, stuff at her house, stuff in the car, stuff to be thrown away, stuff to be donated, stuff to be sold, stuff for this family member, stuff for that family member, stuff, stuff, stuff.  It's a lot of stuff.
Dealing with all this stuff has left me completely exhausted and stressed out.  And, what does Shara usually do when she is stressed out?  She goes thrifting.  More stuff.  Stuff, stuff, stuff.  Luckily, I have been able to go to a few thrifts and find only a few things that I had to have.  Less stuff.  That's good.
What did I buy? 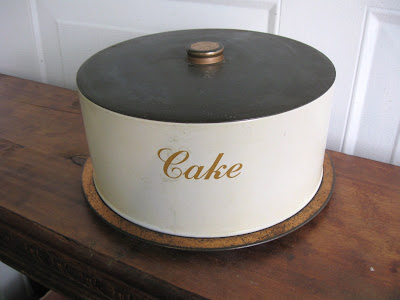 A nice old vintage CAKE carrier for the booth.
(OH, my GOD.  I forgot about the booth.  MORE STUFF.  I have stuff everywhere.) 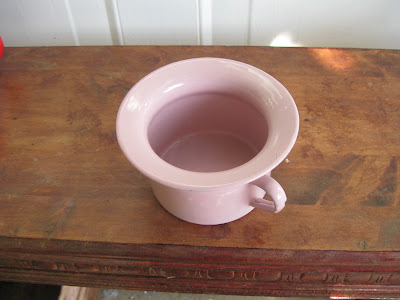 A pink enameled cup of some sort.  I quit buying enameled things years ago.  But, pink enamel?  Are you kidding me? 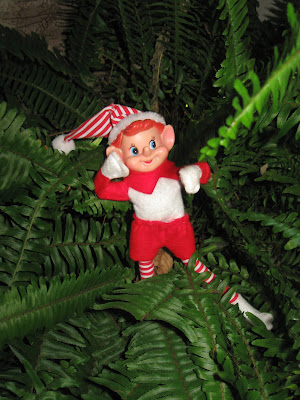 An elf for my collection.  My one and only purchase at a thrift store today.
So, that's not that much stuff...right?  One thing to sell, one to keep and the pink cup to be thunk about.  (Thunk is too a word!)
But, then there's the stuff I brought home from my Grandmother's house. 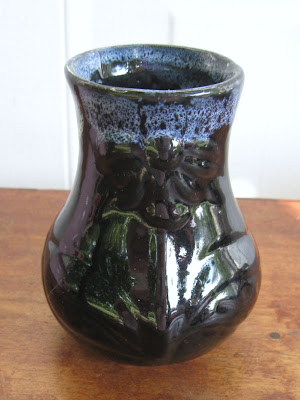 A very lovely vase marked Colo Springs on the bottom.  It isn't my usual pastel white or pottery, but it is so pretty that I decided it would have a good home at my house. 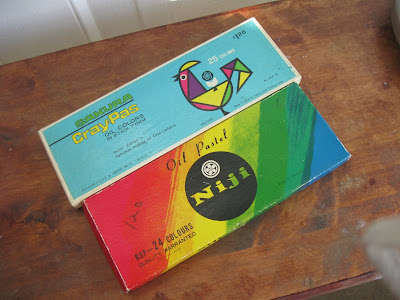 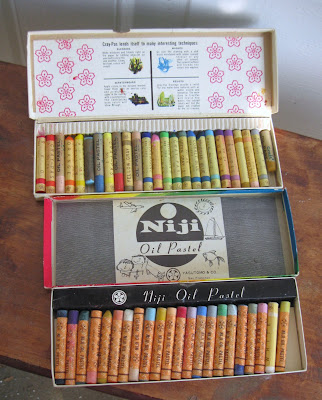 Complete with the oil crayons.
Now, here's where the stuff gets a little out of control.  But, first, a back story.  Most of my childhood memories of birthday parties, Christmas and Easter are at my Great Grandmother's house.  She was the original Martha Stewart - colored Fiestaware dishes, cut glass dishes with one for sweet pickles ONLY, another for black olives ONLY, etc.  She's the Grandma that had the mini toasting glasses that I love so much.  She always put a number candle on the birthday cakes.  She set a beautiful table, made crepe paper party hats for each occasion and dressed to match it all. 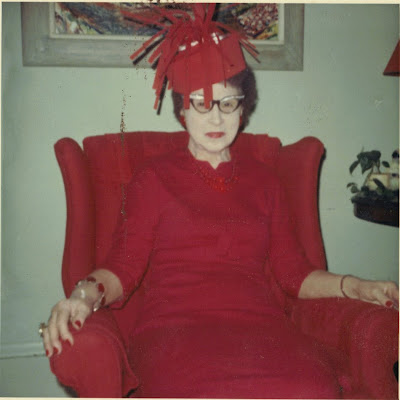 Here is my Great Grandma in her red pantsuit and red party hat sitting in her favorite red chair.  She died when I was only six years old.  She was the only "Grandma" I ever had in the bake you cookies, buy you a doll sort of Grandma.  My Grandmother (her daughter) wasn't that type of Grandma.
When we started cleaning out the house, I thought I wouldn't get sentimental about things because my Grandmother wasn't the typical Grandma with typical Grandma sort of things.  But, that's when we started unearthing tons of things that belonged to my Great Grandma.  Ohboy.  Things I remember, like dishes and glasses and serving bowls and such.  One of my fondest memories was everyone drinking out of Santa Mugs at Christmas.  I've been searching out vintage Santa Mugs for the past few years and I have amassed quite a collection of them based on that memory.   So, you can imagine how giddy I got when I found a box marked "Santa Mugs" out in the shed.  Could they be? 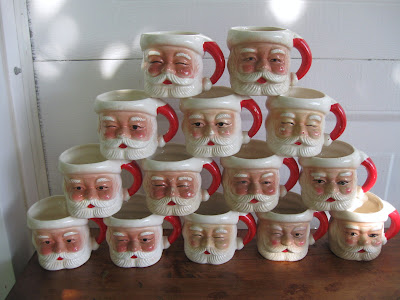 My great Grandma's actual Santa mugs!  Winkers and blinkers and wide eyes and everything in between.  I still can't believe I found them. 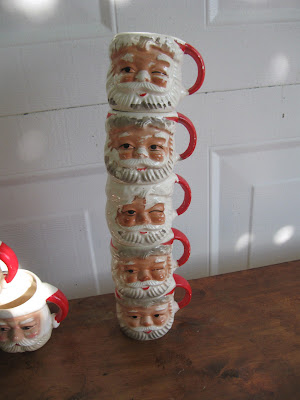 There was this stack in the box too.  They are a bit smaller and two of them had really bad transfers on their faces.  Three of them weren't bad at all.  After I took this photo, the neighbor cat came over for a visit and jumped on the table.  I heard a *CrAsH* and thought, "My CUPS!" 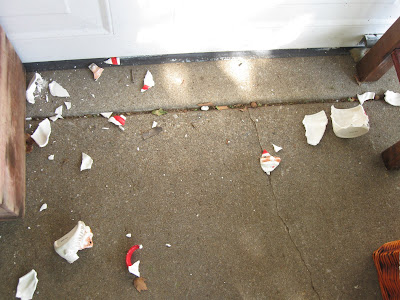 But, luckily, and I really do mean luckily, the only two that fell and broke were the two that were in really bad shape.  Whew.  They are all back in the box and safe again.
I am really trying to only bring home the minimum amount of stuff now.  If I really, really, really love it and no one else wants it, I will bring it home.  But, I won't be bringing anything home just for the sake of having it.
'Cause I am stuffed out.
Posted by Shara at 10:32 PM