Cute. Cheap. What More Could You Want?

I stopped in at Lowe's today to buy a replacement handle for our shower that has gone from a drip, drip, drip to a dribble, dribble, dribble to a constant trickle. The good news is that the shower no longer leaks. (I won't mention the three hour part where it did NOT fit, we had to turn off the water in the entire house, make a return trip to Lowe's for additional parts, a major hissy fit from the Breadman when I pointed out that he didn't use all of the parts that were included in the package, the sobbing fit I had when he yelled at me for mentioning the aforementioned missing parts and the fact that the handle is crooked and the "H" is where the "C" should be and "C" is where the "H" should be. But, like I said, I won't mention that....   (I will say that I am the person that fixes everything and I was going to fix it tomorrow AFTER the dishes were done, hands were washed, toilets were flushed and showers were done. I'm just sayin'...)
Okay, so when I was at Lowe's and I was headed to the Plumbing Aisle, I spotted a 50% off sign, which sent my cart reeling off in the opposite direction. The Patio Furniture had a 50% off sign by it, but the actual shelf tags were at least 75% off. They had various tables, screens, market umbrellas and other items all very cheap. But, what did I spot that made my heart sing with happiness? 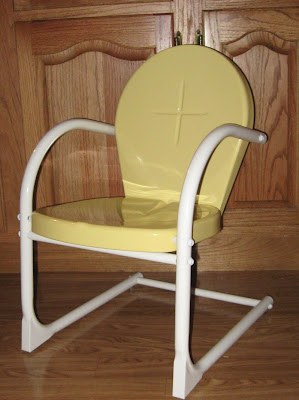 A wee little child's metal Motel Chair.  OH MY GOSH!  I didn't even know these existed.  I have ten adult sized vintage chairs like this in my yard as well as two different vintage gliders.  I love old metal lawn chairs.
I found three of the little chairs, but one box was open and I feared it might be missing parts.  I bought this sweet pale yellow one and a green one as well.  Have I mentioned that I love them?
And, the best part?
$4.99.
I know!
(BTW, I do not care that I do not have or even know a child that can sit in these chairs.  I love them!)
**Edited to add that The Breadman, in an effort to redeem himself from the shower fixing fiasco, brought the third little chair home to me today as an "I'm sorry" gift.  So, now I have two green ones and the yellow one.  Bring your kids over for a visit sometime!
Posted by Shara at 10:47 PM