Friday morning started off with the dryer quitting. *Sigh* A quick trip to Lowe's and my trusty No Interest/No Payments for 12 months coupon and I have a new dryer. Saturday, The Breadman picked it up and, with help from The Bean, they got the new one put together (cord put on the back) and I got the old one out of the house. Thank goodness it did quit, it was absolutely packed with lint in the back and the dryer hose was full too. I fear we might have had a fire eventually if it wouldn't have needed replaced. Our utility room is in an interior room, so the duct work goes up the wall, across the floor of the attic and then outside. It is really wonky and hard to keep cleaned out. The new rule is, every three months we will move the dryer out , clean the back out and clean out the entire dryer duct.
With a new dryer and part of the utility room clean, I decided it was time to clean out the shelving above and get it completely organized. We have a small house, so I have to make use of any and all storage space that I can find. A few weeks ago I bought a label maker at a yard sale and it is my new BFF. 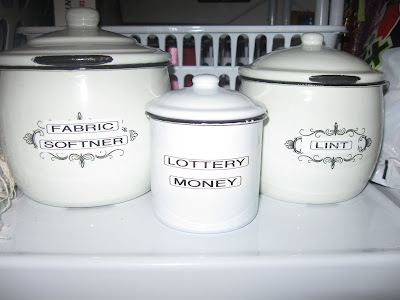 For on top of the dryer - new containers one for Fabric Softner, one for Lint and one for Lottery Money* - That's the spare change I scrounge up in pockets and in the washer. The Breadman asked, "Why are we saving the lint?" We aren't saving it - I just toss it in there and dump it every few days. (I don't have a trash can in there.)
*Arkansas just got the lottery this month. Year after year the citizens voted and it never passed. But, it finally passed this year and TA-DA it is here! Woo-Hoo. Now, I'm not a big gambler, but it is fun every once in awhile. Yesterday as we were going to buy some handy storage containers for my cleaning frenzy, I decided that since I hadn't been to a garage sale all weekend, that I would spend my $10.00 on lottery tickets. I bought five tickets and I won $10.00, so I got two more. Then I won $15.00. So, I kept $10.00 and got one more ticket. Then I won $40.00! So, I kept $30.00 and go two more tickets. Then I won $15.00 and got $10.00 and one more ticket. Then, I think I won $20.00. I kind of lost track of it after awhile. But I know I had $10.00 in my wallet when I got there and I left with $60.00. So, I made fifty bucks in about thirty minutes. Not bad!
I only went to one thrift last week - so they are meager finds. 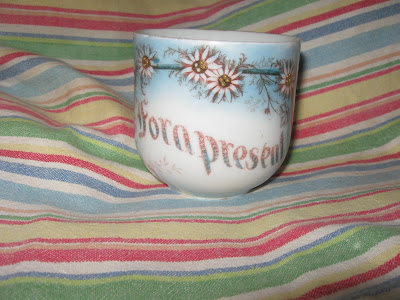 A dainty 14kt cup with "Forapresent" on it for 50¢. It's something political or official - I'm trying to Google it, but having trouble finding out exactly what it means. 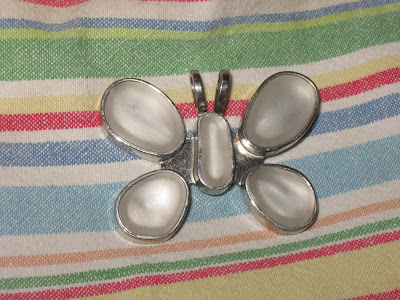 This butterfly caught my attention in the jewelry case. It was heavy, well made and signed, so for $1.00, I bought it. 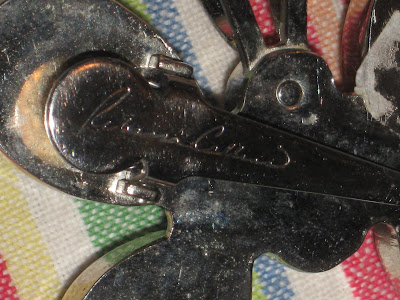 When I found the Rebecca Collins jewelry website, I got really excited, because nearly everything was several hundreds of dollars. Then, I spotted the butterfly. I anxiously scrolled down to see the price........ten bucks. Come on! All those $500 and $800 items and I found the ten dollar one? Apparently, it was mass produced for Neimen Marcus in 2000. Oh well, I still like it. (But, I would have lurved it for $800.00!) 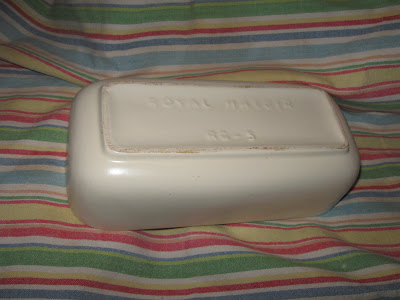 A piece of my beloved matte white pottery for $1.00. (It's Royal Haeger, Sue!) It was high on a shelf by the front door. When I took it down, it had the doorstops and a bunch of screwdrivers in it. I threw $1.00 at them and ran out the door before they realized I took their storage container! I haven't found piece of pottery in months and months. It's funny, because I just boxed it all up for the winter too.

Today, The Breadman left to run an errand and when he got home, the door wouldn't open from the outside. Or the inside! We finally got it open, but I am so glad that we were both in and out so we could get it open. We had a brand new lock set in the garage that someone hadn't gotten around to putting on the door yet *cough*cough.* But, it's on now.
Hoping for a calmer week, some thrifting and lots more organizing. And maybe a few more lottery tickets.....Wish me luck.
Posted by Shara at 9:52 PM